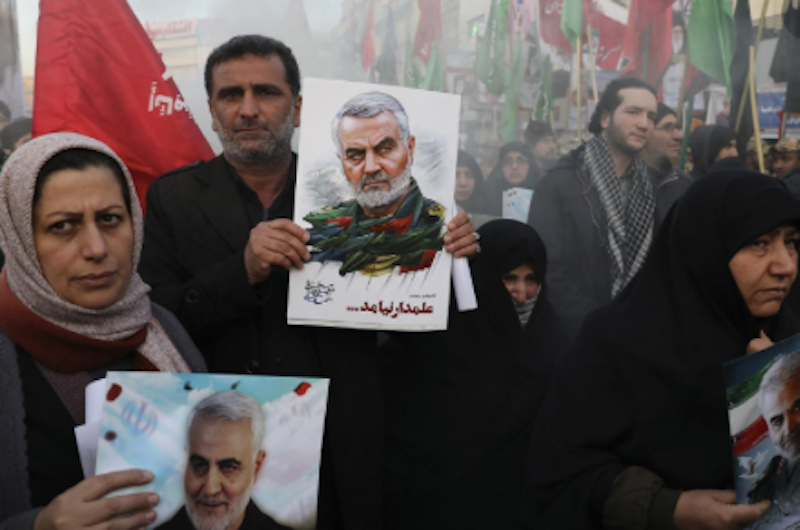 Qassem Soleimani, leader of Iran's elite Qud Force, was partially responsible for many of the over 500,000 million deaths in Syria's war, hundreds of American soldiers' deaths, and the recent deaths of around 1500 protesters in Iran who were outraged by the regime's oppression. He was a monster, but few Democrats had heard of him when he died, which didn't noticeably impede their opining, often in a way that made them appear to be inhabiting a parallel reality. The media, which never covered Soleimani before his death, is not informing them now either. They've covered angry protests of his death in Iran, while paying little attention to all the celebrations of the general's death throughout the region. Iranian propagandists must be pleased.

The Democrats have become Captain Ahab and Trump’s their Moby Dick. They'll pursue him while they steadily become less able to identify reality. Think of Ahab's final words: "Towards thee I roll, thou all-destroying but unconquering whale; to the last I grapple with thee; from hell's heart I stab at thee; for hate's sake I spit my last breath at thee." This charged emotional state has them pushing the panic button with increasing regularity.

As soon as word came out that Trump had ordered the killing, the media and the usual Hollywood types began talking of WWIII, which is ludicrous on two counts. Contrary to what the Democrats believe, Trump does not want a war—neither do the Iranian leaders, knowing that they'd end up dead. But even in the unlikely possibility that war breaks out, it’d be a regional war involving proxies in the Middle East, not a world war, because neither Russia nor China would intervene.

Progressive hero and former San Francisco quarterback Colin Kaepernick weighed in on Twitter with perhaps the most absurd celebrity response to the attack on Soleimani, claiming that it was just the latest example of "American terrorist attacks against Black and Brown people." Kaepernick's too devoted to his colonialism narrative to realize that, except for the approximately 600 American deaths the general was responsible for, all the rest of them have been brown people. Minnesota Rep. Ilhan Omar claimed that all the war talk had triggered her PTSD, and Michael Moore tweeted, asking if Americans had heard of Soleimani, or if they knew he was their enemy. "By the end of today you'll be trained to hate him." If the implication was that the media would do the training, he was way off base.

The New York Times' headliner to Soleimani's obituary was more positive than the one it gave to the obit of former NFL football coach Sam Wyche. Compare "Qassem Soleimani, mastermind of Iran's intrigue and force, dies at 62" with, "Sam Wyche, the last coach to lead the Cincinnati Bengals to the Super Bowl, but was later fined...for barring a woman from the team's locked room, has died." Apparently the Times thought that it was crucial to sum up a successful coach's life by including the fact that he once committed an anti-feminist act back when women reporters weren't commonplace in pro athletes' locker rooms, but didn't think readers needed to know that Soleimani trained troops to set roadside bombs aimed at killing American soldiers. Perhaps this "intrigue" was that those bombs were hidden.

Looking at the situation objectively, with judgment unclouded by Trump Derangement Syndrome, it's at least possible that Trump just re-established deterrence over Iran, which responded weakly with face-saving missile attacks on military bases in Iraq that killed nobody. But celebrity Democrat Bette Midler has assured us that Iran is very tricky and sometimes waits a year for retaliation. Her message is the usual, "Be very afraid, because Trump did it," but she has no more expertise than any other armchair pundit.

The View's Trump-hating Joy Behar lost her bearings and announced that she was thrilled white separatist Richard Spencer had disavowed the President after Soleimani's death, thus giving valuable publicity to a neo-Nazi. With all the talk about "normalizing" Trump, how about normalizing Richard Spencer? Talking about him like this is a good start.

Now there's a big effort on to blame Trump for the deaths on the Ukrainian airliner that Iran shot down, as if Trump was responsible for not shutting down the airport during the retaliatory attack. Moore, Kaepernick, and Behar are trumpeting the Left's current level of narcissism and arrogance. It's narcissistic to think of the situation in the Middle East as about the U.S. Americans don't want a war, but that region already has one that's causing them widespread misery. The man Moore suggests is a nobody is most definitely not a nobody to millions in that part of the world.

Many Middle East experts are much less panicked than the Democrats over recent developments, perhaps because they better understand Soleimani's brutality and don't think of the United States the central player in the ongoing conflict. They know that Syria isn’t Iraq all over again.

It's narcissistic to let your hatred for Trump trump everything. Tunnel vision generates dogma, which the Left is full of these days. It's dismaying to see the media take Iran's side, but they're heavily invested in the narrative that Trump is the Antichrist and that everything he does must be condemned. Where was the outrage when Obama had drones strike Libyan dictator Moammar Kadafi's motorcade in 2011 without congressional approval?

When Hillary Clinton said of that attack, "We came. We saw. He died," the Democrats shrugged. Obama's recklessness led to a mass migration by tens of thousands of Libyans trying to cross the Mediterranean to get to Europe. Democrats know as little about this as they know about Soleimani when he died, because the media, deferring once again to Obama, soft-pedalled the story. The Democrats who know what happened in Libya find a way to rationalize it. They're so wrapped up in themselves that they can no longer decipher reality. Meanwhile, the Iranian people have taken to the streets. Some are calling for death to their Supreme Leader, something that could get them executed.