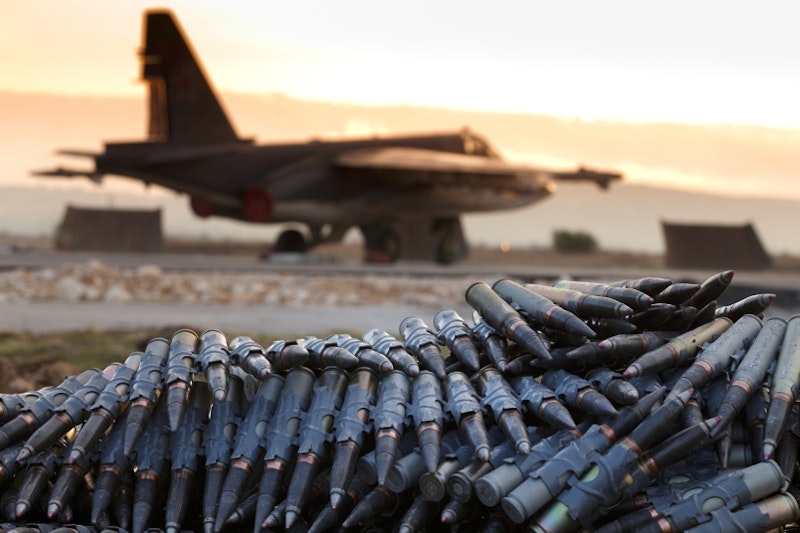 Major Western governments and corporations closely allied with them export weapons and military training around the world, even in numerous places where we are not (yet) at war. Laissez-faire capitalists like me are not obliged to approve, despite what some conservatives (and plenty of Clinton-style liberals) might tell you.

In theory, elaborate regulations forbid arms sales to regimes engaged in humanitarian abuses. Just in the past few weeks, we got several reminders how meaningless these regulations are in practice. A report on the British government’s cozy relationship with terror-exporting Saudi Arabia noted the embarrassment of a UK cluster bomb turning up in Yemen and underscored the fact that the UK provides training to the militaries of half the countries on its own list of rights-abusers.

The U.S., meanwhile, is so fond of military and energy collaboration with Saudi Arabia, we’re apparently willing to turn a blind eye to that country helping to kill thousands of people on U.S. soil. We sell jets to iffy regimes such as Egypt—which they pay for with a little help from billions in U.S. dollars, care of taxpayers.

The French just beat out the novice Japanese for a contract to make submarines for Australia, with a major French selling point being that country’s greater willingness to make nukes, devices of which the Japanese remain understandably wary despite Obama’s recent trip to Hiroshima (please note that I’m not calling Australia a rogue nation, just observing inevitable yet perverse competitive pressures at work in arms trading).

True, libertarians should be wary of any starry-eyed radicals who think that gun control can be applied on an international scale, as if the worst nations will not seek arms from somewhere even after the better-behaved nations stop selling. But we don’t have to exacerbate conflicts by knowingly selling to bad actors, and doing so knowingly is sufficient collaboration in violence to warrant punishment even under a strictly libertarian law code. It doesn’t take complex regulations, just a logical extension of the idea that assault should be legally punished.

It’s one thing to sell a pistol to someone you genuinely expect to use it responsibly. It’s another to be a gunsmith to the Mob or a missile-builder for Stalin. At the very least, we should object to government subsidizing such sales. And surely we should object to governments selling arms to other governments. That’s just taxpayer-subsidized domestic criminality aiding foreign criminality, after all. I have more sympathy for a private company selling to foreign individuals engaged in legitimate self-defense. Governments don’t rise to that standard on either side of the process, though.

I’m all for the individual right to bear arms, but if your intuitions tell you that you can be proud of your rifle and at the same time creeped out by those defense industry sales posters on view in DC touting the latest (subsidy-seeking) fighter jets, you may be right. For starters, let’s at least see how few wars get paid for if the fighters really have to rely on private donations alone. That kind of stateless anarchy doesn’t sound so violent to me.