War on the Vulgar Is Over

Sheer civility is of limited value. 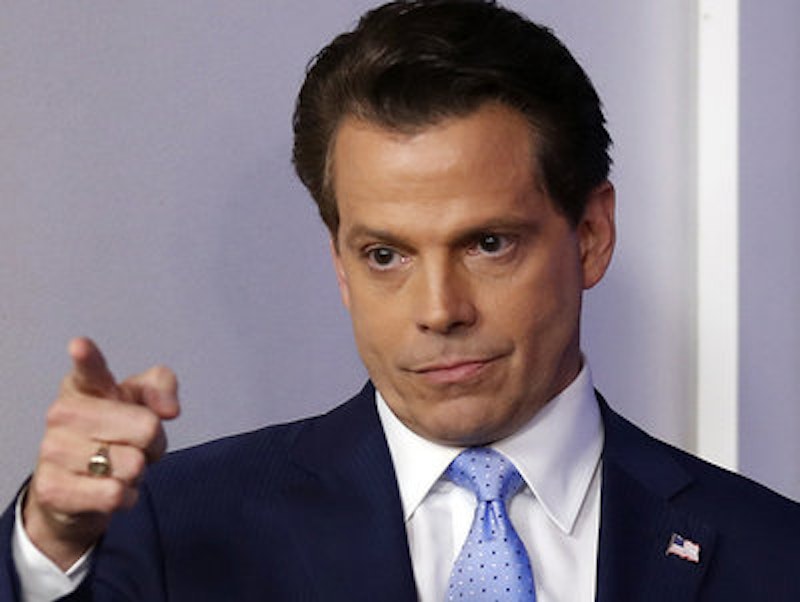 People have decried the coarsening of political discourse for decades, but it's time to admit defeat in the war against vulgarity. Anthony Scaramucci's observations about Steve Bannon's oral onanism were the last straw for some defenders of linguistic propriety. New York Times columnist Bret Stephens, while blaming this and that for the collapse into vulgarity (the year 1968 itself, Bill Clinton, and, puzzlingly, the defeat of John McCain at the hands of Barack Obama), quoted verbatim the most indelicate portions of Scaramucci's tirade.

The exchange has apparently changed the policy of the New York Times toward the inappropriately ribald. It found that it could not cover the news responsibly without reproducing the material on Bannon's exotic Tantric achievements and Reince Priebus' fucking schizophrenia. Thus the coarsening of the culture has led inevitably to the coarsening of the mainstream media, and of us all, if indeed we can get any coarser.

In the brief outbreak of open warfare between Scaramucci and Priebus, we got a pretty good contrast of communicative styles. There was much outrage at Scaramucci's, and much praise of Priebus', as he appeared on CNN to describe the circumstances of his "resignation." Priebus was almost unbelievably diplomatic. He maintained amazing message discipline. He comported himself with dignity. He was also obviously and wholly dishonest. "Look, the President wanted to go a different direction… I support him in that. I'm doing great… I've been obviously talking to the President for a few days about this… The President was great… I'm going to honor the president every day… I'll always be on team Trump." And so on.

That's the sort of routine falsity that people expect out of politics, and that Trump has done so much to destroy. In a way, Priebus' response was itself a criticism of both Trump and Scaramucci. That doesn't make it a true response, and a non-pathetic one: he spent the entire interview saying that he agreed enthusiastically with the decision to fire himself, and thanking Trump for firing him. This is when we know from internal sources that Priebus tried to keep Scaramucci from getting hired at all and then was deposed by him in an explosive palace coup.

And I also have a notion that Scaramucci was right that Priebus was the source of many White House leaks, and that Priebus was operating behind the scenes to try to control Trump to his own purposes and possibly those of the Republican party as he saw them. In the books that will soon appear, I don't think Priebus will emerge as the sort of Trump loyalist he played on television as he exited the stage.

Priebus’ approach was a particularly degrading bit of self-abasement, but it opens up as a possibility in a political personality who loses all connection between the private person and the public persona. This is a sort of falsity more profound than lying, though it leads to routine lying as well. Between the outer enactment and the inner life yawns an abyss that is existential and ethical. No one who has watched Priebus speak over the years would have expected anything different.

It's what makes people's skin crawl about Hillary Clinton. Al Gore was the same way: visibly manufacturing a false persona that appears always, in every public setting or interaction, to be reading a script, to be strategizing with every word to create some sort of impression or effect. Even the emotions get fed into the performance, and we watch such people strategically simulate outrage and sadness, inspiration and pleasure. Concealed somewhere inside the behavioral and verbal repertoire there's the second-rate actor, dedicating his life to enacting the role of himself.

On the other hand, the Priebus mode might look pretty good right now; we might be tempted to look back in nostalgia even to Hillary's simulation of Hillary. That's because the alternative put forward by Trump and now Scaramucci, though often amusing, can also be very repulsive: a swaggering, obscene, macho throwback. They really do break through the pervasive bullshit, including the conventional etiquette of their positions, but they also keep inducing sudden reprehensible chaos. The simulated political persona of is dedicated above all to one thing: safety. The first priority is not making a mistake. One thing you'd have to say for Hillary Clinton or Gore: they were going to be extremely careful, and a disastrous error was unlikely.

But Trump/Scaramucci scatological swagger is only one possible angle from which the inhumanity of American politics, its falsity, its inability to engage or inspire, could be transgressed or transcended. A more full-fledged and direct glimpse behind the masks of political leaders might have all sorts of flavors and results, including more directly personal engagement with issues and more direct human connections to the people they claim to serve.

John McCain, in his career, tried fitfully to break through the stultifying quality of American political rhetoric; he was particularly refreshing in 2000, when he was running against George W. Bush and riding the "Straight Talk Express." And he had one more crack at breaking through the pall of jive on Friday morning as he went maverick or even rogue on skinny repeal.

At any rate, I think sheer civility is of limited value; and I don't mind the sort of hilarious vulgarity that Scaramucci threw at Bannon; perhaps Bannon doesn't either, really. But I’d like to see many different sorts of transgressions of the speech codes of American politics, many ways of breaking with polling, focus groups, and political parties, many modes of attack and defense and even collaboration, many ways of breaking the apparent unanimity both of positions and of personae.

There’s an existing and growing anti-Trump backlash, for extremely good reasons. The attacks on Trump have focused on his style of communication as much as on his concrete policies, however, and I worry that people will draw the lesson that we need a return to falsehood, that what wrong is that we stopped playing let's-pretend. Admittedly, right about now politicians with message discipline—which means they repeat the same empty words in the same order over and over again—seem like "grown-ups." Bret Stephens is not the only one who yearns to be governed by grown-ups, people who are presidential, who dedicate themselves extremely to simulating human dignity.

But I don't think we're really going back to an era of controlled communication, in which you more or less had to swallow whatever they said, and whomever they said they were. It's going to be hard to return to a false front of comity, or an extremely limited palate of words and positions. I hate that it had to be Trump who broke the fog, but I want the fog gone forever.