A relic of the French Revolution no longer applies. 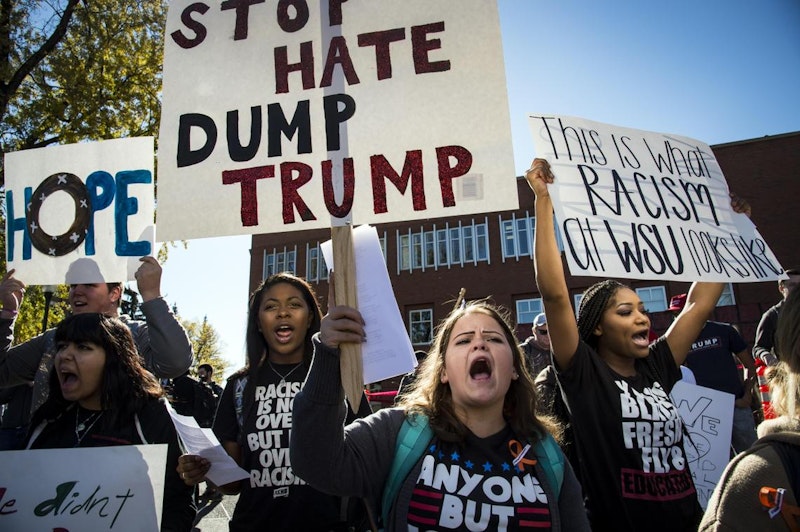 Back in May, Evergreen State Biology professor Bret Weinstein, a longtime advocate for racial justice and a Bernie Sanders supporter, defied a “request” by non-white students and their white allies to stay away from the campus on what's called the annual “day of absence” at the Washington State school. Soon, the students were threatening violence (including kidnapping the “racist” professor, according to Weinstein) and Weinstein was forced off the school grounds.

A major story by most standards, but it was clear from the outset that only certain media outlets would give it serious coverage. It was no surprise that Fox News’ Tucker Carlson had Weinstein on his show, while CNN and MSNBC passed. The New York Times ran three op-eds (two attacking the student militants, one defending them) on it before they deigned to send a reporter to Olympia. It was a non-story to what increasingly looks like a non-newspaper. A strict, biased narrative binds The Times.

So right-wing, Trump-shilling Fox runs with a story featuring racism (by the students) and campus revolt, but the mainstream media’s not interested? Something strange is going on here. The binary left-wing/right-wing political taxonomy that was birthed back in the era of the French Revolution is not useful in analyzing a fluctuating political landscape.

Identifying as a member the Left once meant that you supported classically liberal values such as free speech, equality of opportunity, tolerance, racial justice, and individual rights. A quick examination of the intolerant behavior and the rhetoric of the militant Evergreen State students reveals that they have little regard for these principles. They believe in their free speech, equality of outcome not opportunity, and the rights of the collective over the individual. In many ways they resemble Mao’s Red Guard in China’s Cultural Revolution.

British Islam-reform advocate and political commentator Maajid Nawaz uses the terms “control left” and “regressive left” when referring to the school of illiberal thought the Evergreen students represent. Actual liberals and free thinkers, repulsed by this left-wing authoritarianism, now find themselves sometimes drawn to the company and ideas of people on the right. These people will at least treat them with respect and listen to their ideas, whereas regressive leftists sneer in condescension at any thought that deviates from their dogma. As the control left eclipses what was once called the “thinking left,“ those espousing classical liberal values are finding that some right-leaning thinkers offer fresher points of view that aren't limited by the need to avoid any charges of intellectual blasphemy by the thought police.

The Left has come to be driven by the principles of intersectionality, which it uses to run a con game that amounts to a power grab. The con is to establish a hierarchy of minority victimhood and then trick or coerce the “privileged” majority into signing up to be “allies,” which means you sit at the back of the bus and listen politely. People who’ve always identified themselves as liberals and supported racial justice may find, as Weinstein did, that if they don't buy into the con there's a high price to pay. Actual liberals who’ve seen how this ugly game works might find themselves admiring conservatives for the fact that they refuse to play it. They might wonder if they're still on the Left.

The Left is associated with liberal principles it no longer fully embraces. You don't see anyone on the Right violently trying to prevent a speaker from addressing a college audience, yet the Left is supposed to stand for tolerance of diversity of thought. People who are denied free speech and threatened with violence for no legitimate reason don't appear on left-leaning media outlets, so what does left-leaning even mean at this point?

What does the Right stand for? The same as the Left—winning by any means necessary, because they're just two tribes. The Right is supposed to value conservative principles, but it's now moved towards nationalism. Perhaps they felt the threat of a Hillary Clinton presidency was so dire they had to take drastic measures, but the GOP is now losing its identity. The Left, poisoned by postmodernism, hates the concept of Western culture so much that core beliefs like free speech and individual liberty are now luxuries that get in the way of their mission to rid the West of its multiple inequities.

Being on the Left or Right is now about whose side you're on, not the central beliefs that define your worldview. There’s a large group that doesn’t comfortably fit in either category. Not being partisans, they're interested in arriving at their opinions via objective analysis. As the Left and Right have abandoned their guiding principles in favor of emotions, they’re both heading towards disaster. For the Left, it's a dystopian future that looks like the mob rule of Evergreen State. On the Right, it's an isolationist ethno-nationalist state. Let’s hope people in the middle, who aren't interested in tribalism, can work together to prevent either scenario.