Do Governments Make Noises Like This When They’re Falling Apart?

And can conservatives learn about responsibility? 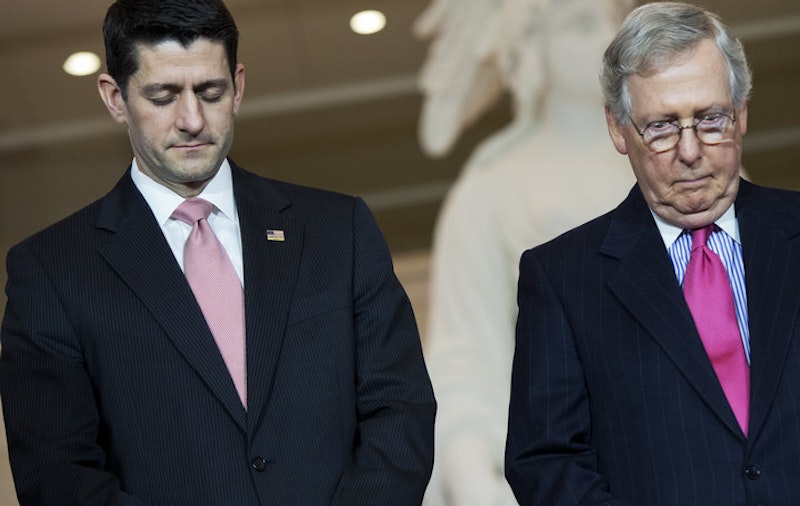 Here are some voices of Washington, summer 2017. “It’s just insanity,” says a Justice Department employee, one who doesn’t want their name out there. The topic is the chief executive’s habit of tweeting abuse regarding the attorney general. “Things are starting to feel incoherent,” says Sen. Bob Corker, Republican of Tennessee. He has in mind his party’s attempts at passing health care legislation. “This whole thing has been a mess,” says Newt Gingrich. He means the attorney general’s bad times with Trump.

“It’s more of a clusterfuck than you even know,” says a “Cabinet secretary,” also on the attorney general situation. All right, cool it down. “It’s just very abnormal that these issues wouldn’t be worked out more quickly,” muses a character who did foreign policy work for the last Bush. The fellow means the way the Secretary of State and the West Wing can’t agree on who gets hired at State, even after five months of power. Now zoom out. “We’re in some quicksand right now. We just can’t seem to free ourselves.” That’s Rep. Steve Womack, a Republican from Arkansas. He’s reflecting on his side’s attempts to pass any legislation at all.

Here are two more. “Can you imagine any other president having to go this far to tell someone you need to go?’’ says a person “informally advising the White House.” The person is talking about that stubborn attorney general, who won’t leave even though his boss derides him. And finally, from the same article: “One former Justice Department official said the president’s anger seems to stem from a misunderstanding about how the department actually works.”

Given the above, I find very piquant this thought published by Kyle Smith at National Review: “The Right concedes points made by the Left all the time; paleoconservatives, for instance, tend to agree with the Left’s framing of the Iraq War as an unnecessary and misguided adventure.” Oh, Mr. Reasonable. A selected portion of conservatives, the faction that was against the war in the first place, now resists the notion that the war made sense and was worthwhile. Wonderful. But anybody with a working brainstem ought to resist that notion.

Iraq was a disaster and we brought it on ourselves, and everybody knows that except the people who write paragraphs for conservative reviews. Dig this: “I’m the only one on this stage that said, ‘Do not go into Iraq. Do not attack Iraq.’ Nobody else on this stage said that. And I said it loud and strong. And I was in the private sector. I wasn't a politician, fortunately. But I said it, and I said it loud and clear, ‘You’ll destabilize the Middle East.’ That’s exactly what happened.” Donald Trump said that a week before he won the South Carolina primary. Now he’s abusing his attorney general because, he thinks, doing so may give him an escape hatch as the law closes in. Meanwhile, the rest of his party, for reasons of its own, convulses when it ought to be passing legislation.

Given power, the Republican Party has shown itself to be so deluded that it’s non-functional. The right-wing Never-Never Land—tough-guy leader, Obamacare repeal—landed in reality and promptly fell apart. There’s only thing to do: reflect on those cock-eyed progressives. “Their nonstop need to hector others is fundamental to who they are,” fumes Smith. And: “The virtue-signaling, the marches for this or that, and the insistence on bending the arc of history toward social justice are baked into the cake that the Left demands you provide for it, on pain of destroying your business.” In the past 20 years, the biggest marches I know of were against the Iraq War and the election of Donald Trump. The right does crazy things, and well-meaning people try to stop them. Meanwhile, National Review tells its readers that progressives have deformed souls.