Why Hate the Mooch? 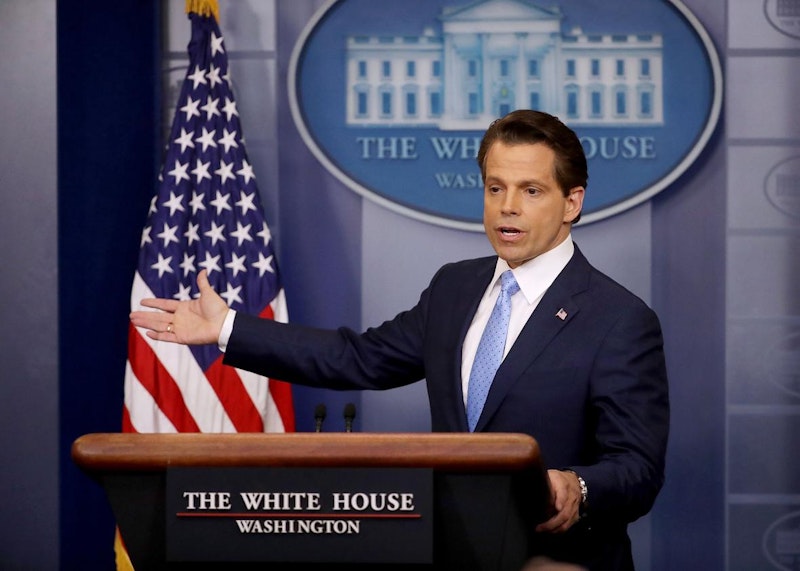 Read the political press for a while, and you notice that they’re good at not telling things. What counts as embarrassing behavior in the Trump White House? We can only guess, but Politico tells us Steve Bannon had “a very ‘aggressive’ confrontation with Trump that some in the West Wing viewed as remarkable, people with direct knowledge of the encounter said. Another person familiar with the encounter said Bannon’s behavior was ‘embarrassing.’” The fight was about Anthony Scaramucci, whom Trump had just hired as communications director. We also learn that Sean Spicer quit because he saw working for Mooch as a “personal affront.” Why? There we’re given little. Apparently, everyone in the White House was in a flap about Scaramucci, and Spicer’s particular flap carried him out the door.

Politico notes “personal tensions between Priebus and Scaramucci.” Reince Priebus, the White House chief of staff, is a buddy and ally of Spicer. I’d like to hear more about the tensions, but Politico focuses on the tick-tock of how Spicer quit. Friday morning he walked into the Oval Office and told Mr. Trump that he was out, that Scaramucci was a wrong call and Spicer was out the door. This was according to “people briefed on the encounter.” Possibly the people had been briefed by Spicer. “Trump was taken aback and told Spicer to stay on board,” one reads.

Spicer’s reason for leaving may be thwarted ambition. “Spicer had expected to evolve into more of a full-time communications director role because he was essentially no longer the public-facing press secretary, having turned over the podium,” Politico says. On the other hand, the article also says, “He had told friends he liked being away from the podium and working on longer-term issues, like tax reform, and had told others how well the White House was going to handle the issue under his stead.” He was looking forward to working on discrete issues, but also—at some point—to becoming the communications director, sort of. Apparently Scaramucci’s hiring meant that “some point” would never arrive. I guess.

Mooch, as one calls him, apparently spells bad times for the aides near Trump. From Politico: “‘There were a lot of people in the White House that didn’t want this,’ one senior White House official said. ‘It happened because the family wanted it and because Trump wanted it.’” Perhaps those near Trump know that he’s zagging and will not zig, that the old team is out no matter what. Maybe the Mooch quoted a line from those SNL routines and expected Spicer to laugh. If it’s the latter, you’ve got to respect the departing hack’s team spirit. He “put on a happy face for a brief resignation meeting” and “even gave Scaramucci a half-hug.”

Trump was crafty while preparing his coup. “What struck one adviser who speaks to Trump frequently is that the president seemed calm—like he had a plan in mind all along—but just hadn’t shared it with many others.” Odd. Normally Trump has no plan and shares everything, at least everything that can come out of a person’s mouth. But those aides do seem to have been surprised. If there’s one time Trump can focus, it’s when he wants new viewing on his television. Now Spicer’s out, Mooch is in, and Saturday Night Live will be doing material about painful-looking face-lifts.