Trump’s Too Timid to Do His Own Dirty Work

Nobody’s afraid of the President. 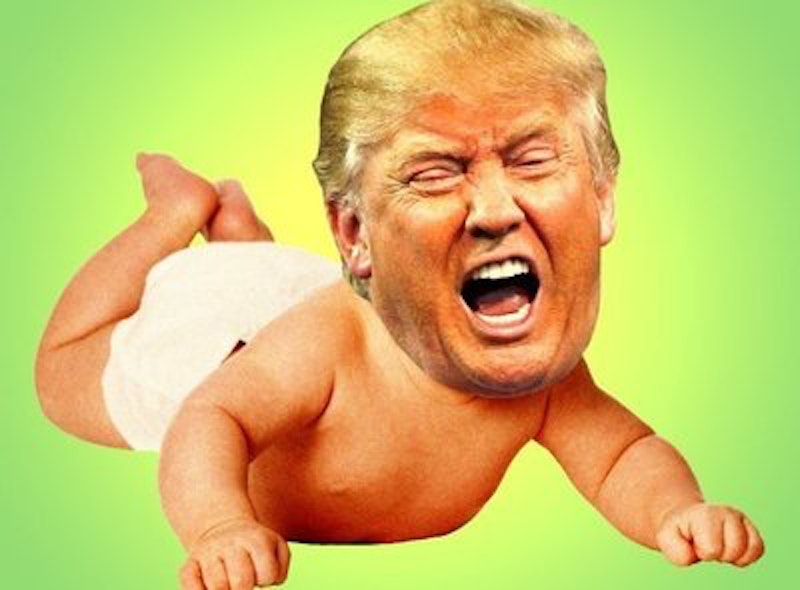 In the joyous jumble that is politics, there’s an unwritten rule to live by: it’s possible to make a horse’s ass out of a politician, but it’s impossible to make a politician out of a horse’s ass. President Trump is nonetheless trying. He’s hired a profane new rapmaster, Anthony Scaramucci, a Trump come-lately, to work alchemic magic on an impregnable substance that resists the assignment. But first, Scaramucci had better wash out his own potty-mouth with soap.

An American token to fair play has always been the axiom: if you don’t respect the man in the Oval Office, at least respect the office. No longer. Trump has so debased the presidency that many Americans have difficulty accepting one without the other, mainly because Trump has made the alternative an international laughingstock of the most powerful government in the world.

What’s more, Trump has proven to be a gutless version of his imitation of a tough-guy, too timid to do his own dirty work and too toothless to scare anyone into bending to his wishes. The modest attempt at health care reform, the “skinny repeal,” was defeated by three Republican senators who refused to be bullied, the tweeting of the demilitarization of transgenders, Congress has passed new sanctions on Russia and Trump had to bring in a character assassin to embarrass and fire his chief of staff. Nobody’s afraid of big, bad Trump.

The exception, of course, is the cohort of Americans who’re lumped into a new demographic class called Trump supporters. Though they’re having it tucked to them without realizing it by the very man they admire, Trump supporters see in their hero-president a man who attacks a common enemy that he falsely created (or resurrected.) The Washington Post’s fact-checker, for example, has kept a running tally of 836 false or misleading statements Trump has made since taking office six months ago. And only recently, the fact-checker clocked 29 Trump misstatements in only 26 hours.

Scaramucci, the new White House communications director, is an Uzi-fast talker with no communications experience. How’s that for openers. But’s he’s made a tub of money so he fits right in with Trump’s gold-plated yes-men. Scaramucci seems more of a hustler than spinmeister, though he’s been brought aboard to chip some teacups in the White House staff dining room.

Even the name, Scaramucci, is befitting for the job. It’s the Italianate spelling of the stock buffoonish character, Scaramouch, in the commedia dell’arte entertainment that was popular from the 1500s-1800s. The character burlesques the Spanish don and displays boastfulness and cowardice. He fits right in with the Trump world of bombast and chaos.

At his introductory appearance at the White House briefing room podium, Scaramucci concluded his remarks by blowing a kiss to the assembled reporters. Just before that pacifying gesture, Scaramucci spread his arms in inclusive fashion, as if embracing the press, and said something like: “We’re all going to work as a team to get the president’s message out to the public.” The expansive arm-stretch makes you wonder whether reporters felt sacrificed to appease Scaramucci’s patron who was no doubt watching from his West Wing lair.

In his initial few days on the job, and during his many appearances on talk shows, Scaramucci seemed hell-bent on proving that he’s looped in, with carefully chosen phrases—“When I was in the Oval Office, the president told me…,” “During my meeting with the president…,” “I talked with the president…” The impression conveyed is WOW! This guy must sit in the oval office all day with his feet propped on the president’s coffee table. Scaramucci’s opening days in Washington recall the lyric from My Fair Lady—“Oozing charm from every pore, he oiled his way across the floor.”

Trump was Scaramucci’s third shopping-choice for president, only after Scott Walker and Jeb Bush washed out. And in Scaramucci, Trump has hired a hatchet man whose utility to the president is the pursuit of leakers, a diversionary tactic of Trump’s to try and flip the Russia investigation in another direction. On assignment from Trump, Scaramucci has threatened to fire the entire White House communications staff and had even challenged chief of staff Reince Priebus to a loyalty oath over leaks. Homeland Security Secretary John F. Kelly, a former Marine general, was named Priebus’ successor in the White House’s top appointed job.

Yet in Trump, Scaramucci has a client that resists advice the way baloney rejects the grinder. The guilty party is in the mirror but Trump refuses to look. Within a couple of days after Scaramucci buffed his shoes, coiffed his hair and reported for work, Trump was at it again, creating straw men for others to chase.

Trump is a coward who hides behind Twitter. In rapid-fire order over a few days, Trump savaged his attorney general, Jeff Sessions, for not being a Kamikaze-like defender of the president who appointed him. Session committed the unpardonable transgression of recusing himself from the Russia investigation, which carries with it Trump’s implication that Sessions might have been the instrument to end the probe by firing Robert Mueller, the former FBI director and special counsel leading the investigation. Trump is mulling whether to replace Sessions. But Trump’s cruelty backfired. An impressive lineup of bipartisan defenders rallied around Sessions, who has more friends in Washington than Trump.

Trump’s inappropriate speech to a gathering of Boy Scouts compelled the organization’s national leader to issue a formal apology. Trump’s misstep was treating the Boy Scouts’ National Jamboree as a partisan political rally. Trump used the Jamboree to attack his political enemies, real and imagined, at an event as innocent as a youth camp-out. The tasteless attacks drew rebukes from across the spectrum and generations, from parents to CEOs, from chaperones to former Scouts who grew up to become civic leaders (including his own secretary of state, Rex Tillerson.)

Next came Trump’s questionable order to ban transgenders from the military, offensive more in the way he executed the directive and the manner in which he stated it. To paraphrase the order, Trump said that victory and virility far outweigh the cost of providing medical services to transgenders. Congress, the cabinet, the Joint Chiefs of Staff and the lower echelons of the armed forces were caught totally by surprise by the muddled order. The directive was widely denounced and temporarily halted by the chairman of the joint chiefs, Marine Gen. Joseph Dunford. But to add insult to injury, Trump’s Justice Department said civil rights law does not extend protection to gays—the opposite of the Obama Administration’s interpretation.

And when no other constituency is handy to bash, for Trump there’s always Hillary Clinton, his opponent and imaginary nemesis who his supporters love to hate, and whom he views as unjustly liberated while he and his family and campaign are being unfairly investigated for his favoritism toward Russia and its meddling in the 2016 elections. The Russians, led by Vladimir Putin, are playing Trump like a five-string banjo and he doesn’t even recognize it. So much for the dealmaker sizing up rivals. Trump’s caught in a bind over newly passed sanctions against Russia, although the White House says he’ll sign the bill.

As a coda, the Trump White House clumsily threatened Alaska’s two Republican Senators, Lisa Murkowski and Dan Sullivan, that their state would suffer unless Murkowski dropped her opposition to the proposed GOP health care reform. Alaska is heavily dependent on federal largesse and regulation.

Scaramucci, meanwhile, may have problems of his own. His business dealings are being intensely scrutinized, especially his connections to a Chinese philanthropic organization based in New York which lists a portfolio of $18 billion. Scaramucci may be able to patronize the press, but he’s shown no evidence that he can pacify his boss. And while all of this was happening, North Korea launched another missile. They’re getting closer and closer to our shores. Soon we’ll be asking who’s crazier—Trump or Kim Jong-un.