Honestly, why does NATO still exist? 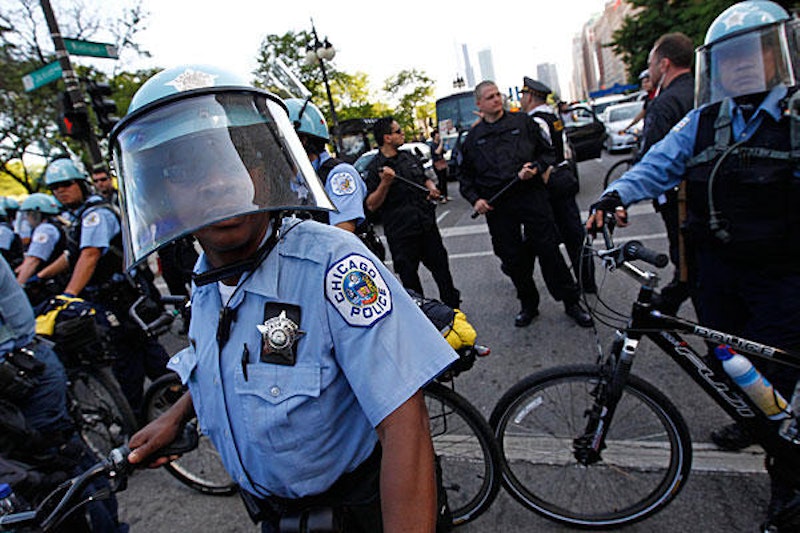 For the last few days Chicago has been under brutal assault by NATO motorcades and Mayor Rahm Emanuel's slobbering ego. Together they have brought us an un-navigable city, with one major artery (Lake Shore Drive) completely impassable, and the other (the Kennedy) opened and closed depending on when some French undersecretary decides he's ready to toddle off to the airport.

NATO has brought us the twin benefits of prosperity and peace. Downtown has been systematically emptied of workers, who can't get to the damn place, and filled to the brim with protestors and the brave police that club them. Despite early boasts that the notorious Chicago police force had decided to pretend not to be fascists just this once, there was, inevitably, a reversion to form at the first sign of trouble, accompanied with the usual cynical-masquerading-as-hysterical justifications about terrorism and anarchists and the safety of the public. The public was already perfectly safe, sitting in the fucking traffic on the Dan Ryan.

I live half a block from the President Obama’s house in Hyde Park, which means that the street I’d use to take my son to school has been closed down for four years and the bus stop my wife would use to get to work has been removed, so she has to walk an extra block and a half every morning. When the President is actually home, we have to show ID to get into our own house. All of which is really annoying and probably unnecessary—but at least I feel like there's some vague justification for it, however tenuous. Somebody has to be president, I suppose, and as long as that's the case, there needs to be some sort of security regiment in place. I get that.

But NATO? Forgive me if I'm wrong, but it was my understanding that we had NATO in order to scare the big bad Soviet Union and prevent Khrushchev from befouling the British Channel with his Red Army and/or personal cabbage-fueled flatulence. But then (news flash!) the Soviet Union keeled over… just about… oh, let me check my watch… more than 20 fucking years ago! Which means no Red Army. No cabbage flatulence. Huzzah!

And yet, NATO is still here, thrashing about gamely across the decades, bombing the Serbs because there isn't any genocide that can't be made worse with a sustained campaign of aerial strikes, or wandering into Afghanistan because that's what empires do when they long for drawn-out humiliation and massive economic collapse.

And then every so often, when they're tired of Serbia and Afghanistan and playing with all the toys they can't quite bear to give up even though there's really no one to point them at—NATO trundles itself off to some far corner of the world and fills some convention center with panel discussions on topics like, "Anticipating How High Before America Says Jump" and "More Guns, Less Butter." Occasionally, for variation, it will even make forays out into the city and wave to all the colorful local pedestrians being strip-searched.

But it's almost over, I guess. Soon the roads will be open again and the dignitaries will all be scattered back to their far-flung countries unless they're still (god willing) delayed at O'Hare. Rahm Emanuel can tell his grandkids that he's a real mayor now that protestors have been beaten on his watch, and Chicago can bask in the glowing assurance that NATO has been here and made us a real world city just like Kabul.

—Noah Berlatsky can also be found at hoodedutilitarian.com.