The Punditry of Personal Destruction

Given the opportunity, I'd publish columns from fascists, Maoists and anarchists. 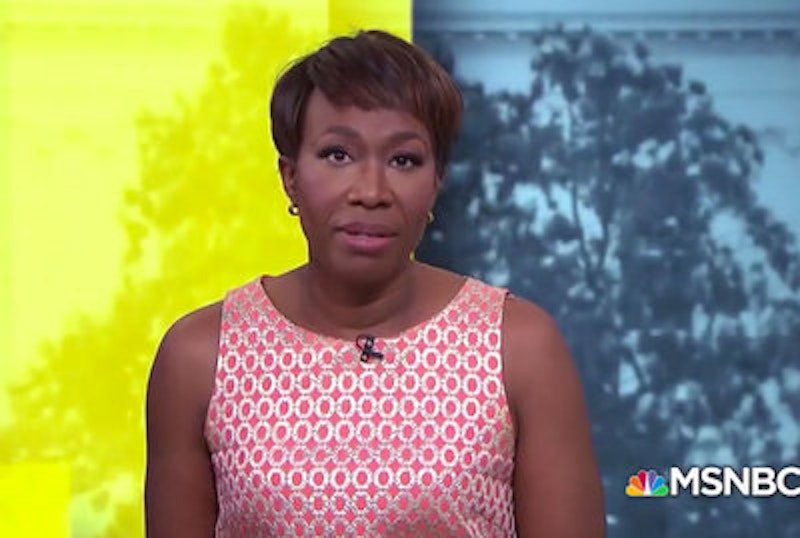 Kevin Williamson and Joy Reid—right white male and left black female—make a cute couple, a nifty little American yin-yang, emblematic of an era where the goal is to destroy people with whom you disagree by examining every sentence that has emerged from them over decades. Williamson, after people dug up certain of his Tweets about punishing women who have had abortions, was himself aborted by The Atlantic, one column into a new gig. Reid, after people uncovered homophobic blog posts, has so far survived. They've both tried with mixed success to explain their situations, Williamson in The Wall Street Journal and Washington Post, Reid on her own Saturday-morning show on MSNBC.

I swallow some bits of their explanations more than others. Reid’s still indicating that she may have been hacked, which puts one in mind of Anthony Weiner, circa 2011. Williamson isn’t very clear on what he has in mind. He sort of opposes capital punishment, but if he didn't, he might endorse it for aborters, if practical. He was engaged, he says, in a "thought experiment."

But I also think that Williamson and Reid are skilled advocates of their positions. I'd welcome them both onto my op-ed page or cable network, if I had an op-ed page or cable network. That Reid appeared this weekend at all, and spent the better part of an hour in self-reflection, speaks well for her, even if it began to feel self-congratulatory (because of her “evolution” to a more perfect politics).

A lot of people who work in opinion journalism have a very long record of carefully or instantaneously expressing their deepest convictions and impulsive reactions, on blogs, social media posts, videos, podcasts, and every other possible medium, all of which are liable to be archived somewhere. I’ve been doing this since 1991, when I started writing columns for The Nashville Banner. Through the 1990s and 2000s I wrote hundreds of columns for everybody. I started blogging in 2004 and have written thousands of entries. Twitter says I have tweeted 12,100 times or so.

It’s very likely that, if you thought it worth the trouble, you could find something in that morass with which to take me out. You might look, for example, at the "Farm Report" country music column that I wrote for New York Press in the early-2000s, in which I presented myself as a 300-pound, then a 400-pound, then a 500-pound right-wing farmer. In 1999 I published an academic paper with the unfortunate title "Why the World Trade Center Has to Explode." (Email received 9/12/01: "Happy now, asshole?") Indeed, without entering into details, the sort of crisis where a blog entry crashes your world has already happened to me. You could probably Google it. Let me just say, with Reid, that once upon a time I had asshole issues. The thoughts and words of a real asshole emerged from my head, perhaps onto your screen. Now I'm fully and finally cured, of course.

Noah Berlatsky accuses me of having the view I have on this primarily because I think they might be coming for me next. That's definitely in there. One way I'm going to try to survive is the Kanye West approach: be so off for so long that nobody has any clear idea what you're doing, if anything.

A lot of what I might say if you bring me something bad from my own past is the sort of thing Reid said: Well, I've been wrong a lot; I'm trying to be a better person; I've developed. On the other hand, I might have to try to walk you through the irony, sarcasm, persona, moment, provocation, or thought experiment that I was trying to accomplish, and why you shouldn't pluck that sentence or embedded video or re-tweet out of the mass and regard it as flatly expressing my opinion. Putting it mildly, people don't seem able or inclined to follow such complications, or really, to read for any reason but to wipe the floor with you. They're looking for a cosh.

There are few people who could get away clean after an examination of 20 years of non-stop opining, or who could even remember everything they've ever said that might be a problem now (that seems to be Reid's fallback; I don't remember writing some of those). But the people who'd get a clean bill of health from both sides (which are “polarized” and hence purist and self-righteous and oppressive) are also the people whom it would be most boring to read, precisely the people whose opinions are most unexceptionable, who write more or less the riskless common wisdom, whose first question isn't what's true or what's bold or what's provocative or what's fun, but what's safe.

If you say exactly what everybody else is saying, even if it's ridiculous or empty, you’re not particularly blameworthy, or at least won't be for another 10 years.

We're already seeing this. CNN, for example, puts on a string or array of pundits all of whom say the same words in the same order ("This is not normal," or "It's social media," or "There is a disconnect"). Big voices, idiosyncratic voices, independent voices, are notably missing. The Washington Post op-ed page consists largely of the safest possible spokespersons for the establishment, people like Max Boot, David Von Drehle, and Ruth Marcus. For some reason, the Post thinks Joe Scarborough and Fareed Zakaria need another megaphone. One rarely reads something that one’s not expecting to (though Marcus expressed grudging admiration for Williamson's "intellectual honesty").

There could be a far broader and more imaginative array of opinions and voices in all these outlets. I'd publish columns from fascists, Maoists, even anarchists. I don't think that would harm anyone, just as I don't think Williamson's tweets on abortion have harmed anyone. I might even publish Noah Berlatsky, though of course that's drifting awfully close to the line, and he doesn't feel the same about Williamson. My first question would be, Can they write? (Actually, Splice Today, which stretches from the woker-than-thou to the paleocon, is a good role model.) Perhaps, on the other hand, Reid's survival (if she does survive, if no other tweets emerge, etc.) signals that people are thinking twice about the punditry of personal destruction. Randa Jarrar survived in academia, even if Kevin Allred at Rutgers and George Ciccariello-Maher at Drexel did not. Williams got the axe from The Atlantic, but will not want for outlets. I hope right and left wrongspeakers can survive equally.

What I'd really like is for everyone to adopt a general principle: it doesn’t harm me to be exposed to opinions that outrage me, and everyone should be free to speak their mind. Or as an asshole might put it: This thing on my face? It's my mouth. That one on yours is yours. I control this one. You control that one. I intend to speak freely, and to permit you to do so. Only please, for God's sake, say something I haven't already heard.