Unable to refute Ayaan Hirsi Ali, writer smears her instead. 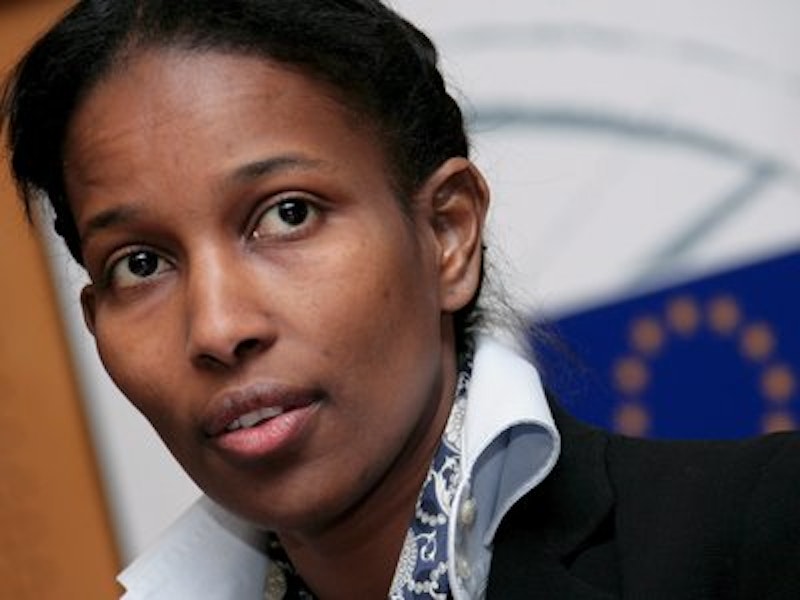 A recent Vox article, "The Ayaan Hirsi Ali problem: why do anti-Islam Muslims keep getting promoted as "experts"?" bemoans the fact that some of Islam's most influential critics are either disaffected Muslims or Muslims who’ve left the religion altogether. Reading between the lines of this article by Wardah Khalid, one senses frustration toward the debate over issues about Islam which is not being conducted strictly from the ranks of believers, and that these "outsiders'" opinions are being taken seriously.

In answer to the question in the Vox headline, I'd tell Khalid that people who were once insiders are often in the best position to offer insights that observers simply don't have the experience to make. Take Leah Remini, for example, the actress and former Scientologist who is now an outspoken critic of that religion. Remini claims that Tom Cruise has become such an important asset to Scientology that any criticism of him from within is seen as "evil." Who, other than an insider, could offer such a first-hand, devastating revelation?

Former members of tight-knit, closed groups are feared because they have "secrets" that are often revealed once they've left the group. Organizations facing situations where former members speak frankly often attempt to discredit the messenger, as the message itself is not so easy to debunk. It becomes an "us against them" situation. The actress Kirstie Alley, another Scientologist, has called Remini a "bigot" for her temerity in speaking frankly on a "taboo" topic, just as any critic of Islam is often casually called an "Islamophobe." Khalid knows that playbook, as her article demonstrates.

She takes special aim at Islam’s vocal critic Ayaan Hirsi Ali, who was subjected to female genital mutilation as a five-year-old Muslim in Somalia. Although she continued as an adherent to Islam into her young adulthood, she began to become disenchanted, especially when Osama bin Laden cited passages of the Qur'an as justification for the 9/11 attacks. Despite being raised a Muslim in Somalia, Saudi Arabia, and Kenya, Khalid describes Ali as a "pseudo-expert." The implication is that she herself is a "true expert," although she provides no evidence of either claim.

The writer then moves quickly to the tired argument that right-wing lunatic Anders Breivik, the shooter who killed 77 people and injured 319 in Norway, cited her as a source of inspiration in his manifesto (she doesn't mention that he also cited John Stuart Mill), and that Ali even defended his obscene violence. Ali, in fact, did not defend Breivik. She denounced his views as an “abhorrent form of neo-fascism." Merely speculating on his motives, she suggested that he may have felt his views had been censored, and that maybe this contributed to driving him to violence, while excusing it in no way. Ali's intention was to criticize the political correctness that stifles debate on such matters as immigration and religion, but regressive leftists twisted her words to make it appear she was championing a mass murderer.

Khalid continues: "Despite these horrific statements and her dubious background, she was recently awarded the Lantos Human Rights Prize by the State Department. She provides no evidence of the "dubious background" beyond a link to an Alternet article by "Vast Jewish Conspiracy" theorist
Max Blumenthal."

Blumenthal accused Ali of a series of deceptions in his hit-piece article, which was warmly received among regressive leftists and Islam apologists. Even though Hirsi Ali has openly admitted that she misrepresented herself when applying for asylum in the Netherlands, giving her name as Ayaan Hirsi Ali instead of Ayaan Hirsi Magan, and claiming she was born in 1967 instead of 1969, Blumenthal tries to impugn her integrity for this, not mentioning that these lies sprang from her fear of being detected by family members who believed she had brought dishonor to her clan and religion.

Wardah Khalid, Max Blumenthal and others of their ilk (many of them share a common hatred of Israel) such as Glenn Greenwald love nothing more than tearing down a black woman from the third world who has experienced suffering in addition to receiving repeated death threats from Islamists. Hirsi Ali speaks out for women's rights, children's rights, and human rights, but she’s a threat to them, so they need to discredit her, because they cannot debunk her actual views. In Scientology, if you speak out like she has you're called a "suppressive person." Regressive leftists and Islam apologists call you a liar and champion of a mass murderer, but it's the same thing.