Republicans Can’t Get Along 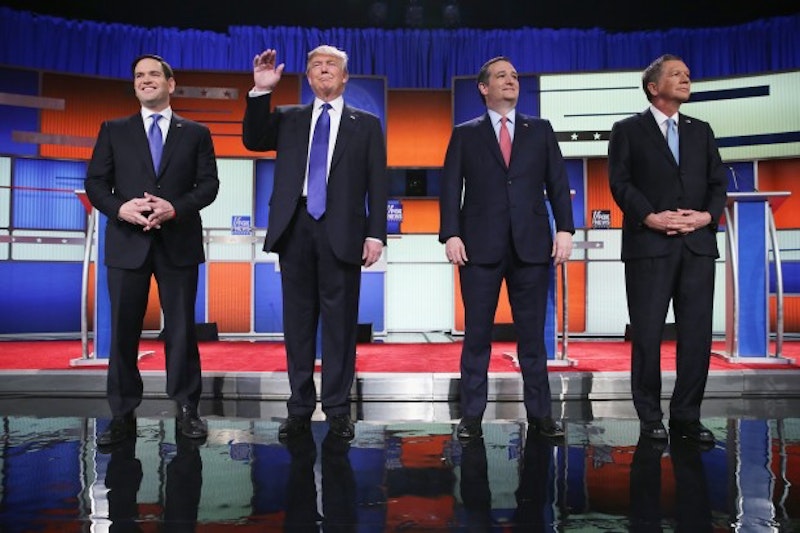 Thursday night's GOP Detroit debate devolved to the level of schoolyard taunts for long stretches. “Lyin' Ted”; “Little Marco”; and “Big Donald” were only three mocking epithets the top three candidates hurled at each other. Donald Trump at one point responded to Senator Marco Rubio's innuendo about the size of his manhood. Satirists could not make this stuff up, folks.

Ohio Gov. John Kasich won by default by standing above the fray. When the Fox News moderators played a humorous YouTube ad that his campaign had put together suggesting Trump-Putin '16, he chuckled and said, “I'm not biting.” Tired of all the cringing, the Republican audience roared with laughter. Yet amidst all the taunting, interrupting and inane dissection of poll numbers, a debate occasionally threatened to break out. Rubio said he wanted to change the subject and “talk about Donald Trump's strategy and my strategy and Ted's strategy and John Kasich's strategy when it comes to ISIS” and other pressing issues.

Foreign policy talk was more illuminating, if depressing. Brett Baier got Rubio to admit that he’s willing to put more U.S. troops on the ground in Iraq, Syria and Libya to fight ISIS. This would include possibly a huge number of troops in Libya, where the Obama administration got egg on its face in 2012 after an assault on the American consulate in Benghazi left four Americans dead.

Kasich pointed out that, “Hillary Clinton worked aggressively to depose [Libyan strongman] Moammar Gaddafi. We had no business doing that. He was working with us. He was cooperating with us. He de-nuclearized. And now they pushed him out”—with the support of most Republicans in Congress including Rubio—“and now we have a fertile ground for ISIS.”

Unfortunately, Kasich only advocated more of the same: death from above, special forces, likely a full-scale invasion, whether or not we call it that. The question never came to Ted Cruz, which is too bad because he might’ve been more skeptical. Discussion got sidetracked instead with discussion over whether America ought to torture accused terrorists and their wives and with attempts to make Trump explain a few of his foreign policy-related flip-flops.

The only other surprising statement of the night came out of Trump's own mouth, when he was trying to rebut the idea that he idolizes Putin. Not so, he said but, “Wouldn't it be nice if actually we could get along with Russia, we could get along with foreign countries, instead of spending trillions and trillions of dollars?” he asked. It was an awful debate but not an awful question.

—Jeremy Lott is a senior fellow at the American Security Initiative Foundation.