The stiff denounces the phony. 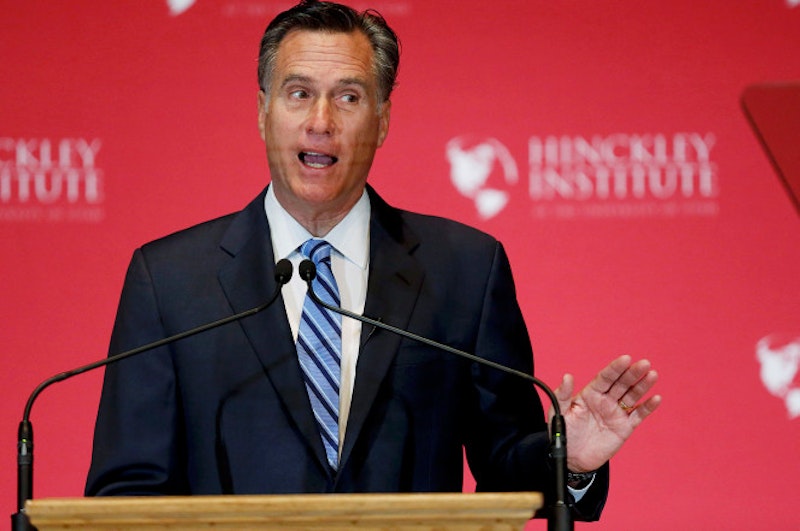 Yesterday, Mitt Romney gave an impressively feisty speech denouncing Donald Trump, the leading Republican presidential candidate, as a big fat phony who’s duping the American people, leading the Republican Party to ruin, and imperiling international trade, all of which is probably true. Romney recalled Ronald Reagan declaring the Goldwater election of 1964 as a “time for choosing.” (Romney also gave the strategically wise advice to vote for Ted Cruz or Marco Rubio depending on who is closest to topping Trump in your state.)

I’m sometimes haunted by the question: what if Romney—who I ended up voting for in the New York primary in 2008 just to protest McCain, if memory serves—was our last, best hope for a mostly-sane, somewhat market-oriented president? Maybe we will only realize it decades from now, after multiple socialist presidents, fascist presidents, and robot uprisings. What if he was as good as it got?

Then again, Romney tweeted how much he’d miss Sen. Lindsey Graham when Graham dropped out of the presidential primaries this year, so what does Romney know? Romney was also rightly mocked by Trump on Twitter once word of yesterday’s speech leaked for having run a terrible 2012 presidential campaign. Oh, and Romney basically invented Obamacare—and denounced Gov. Rick Perry as too radical for wanting to privatize Medicare and Social Security. That last bit was the reason I vowed never to vote for Romney in the general election in 2012 (and instead voted for former Republican Gary Johnson, as it appears I’m destined to do again this year, and as all disgruntled Republicans—and Democrats—probably should this year as well if Trump is nominated).

Romney isn’t so much a living reminder that the establishment is better than the current populist insurgency as a reminder that, as is so often the case, both sides are awful and deserve each other. Can’t they both lose, as (Hillary Clinton pal) Henry Kissinger once asked about Iran and Iraq?

But one wise strategy left to play, a follow-up suggestion from libertarian law professor Randy Barnett to the third-party notion of his I mentioned yesterday, might be if Cruz and Rubio each vowed to make the other a running mate if one of them drops out or if they end up pooling delegates to back one candidate at the convention. Romney has just made it more acceptable for the candidates to talk anti-Trump strategizing in public, I’d say, so Cruz and Rubio might as well get to it while they have a tiny, tiny window of opportunity left.