Even with a mayoral race coupled with the presidential contest. 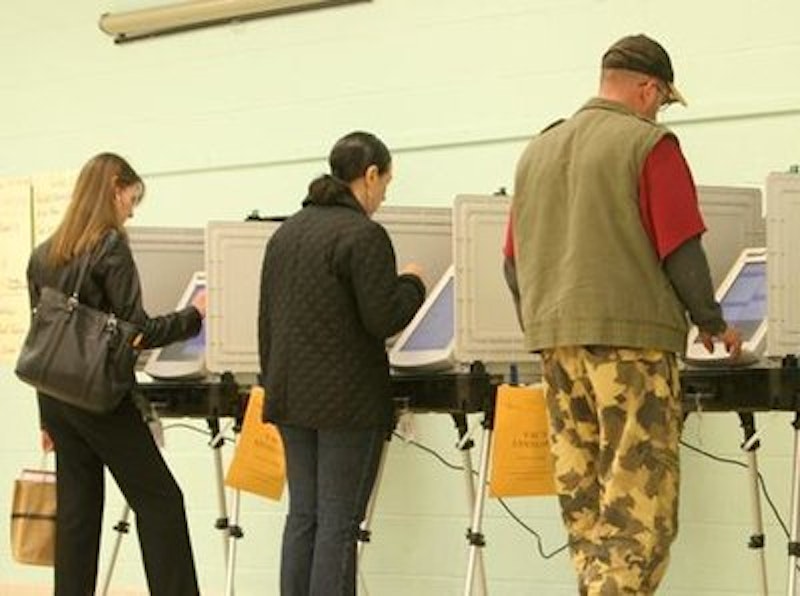 Maryland is slouching toward its April 26 primary election with no massive or discernable shifts or defections in voter registration that other states are experiencing. About the only detectable rumbles occurring in the state are in Baltimore City, where the decibel level is high and voter interest is measurably low, and two congressional districts in the state’s suburbs around the District of Columbia where two seats are open and sharply contested. And the incumbents in the two congressional districts are locked in one of the nation’s most closely watched senate races. A week of early voting in Maryland begins on April 14.

The most stunning contrast in voter mobility is happening in Pennsylvania, Maryland’s neighbor to the north, which shares the April 26 primary date as do three other states—Connecticut, Delaware and Rhode Island. So far this year, 214,000 Keystone State voters have switched party affiliations. That number, on pace for a record, constitutes about three percent of Pennsylvania’s 8.2 million registered voters. About one-half have become Republicans, one-third have registered as Democrats and around one-eighth are labeled as unaffiliated (independent) or with a minor party. That’s a staggering number of switches in a key swing state along the pathway toward nomination.

But Pennsylvania is politically a strange state. It’s been characterized as Pittsburgh to the West, Philadelphia to the East and Alabama in the Middle. It currently has a Democratic governor but retains a stubbornly Republican legislature. In Maryland, regarded as a one-party state, a Republican governor is an aberration that occurs only when Democrats present an unacceptable candidate. The state’s Democratic core is clustered in five subdivisions along the I-95 corridor while the outlying counties are conservative but not necessarily Republican. Maryland’s black population is 33 percent, the largest outside the deep South; Pennsylvania’s blacks make up 11.6 percent of that state’s population.

Pennsylvania is not a crossover state. None of the analysis indicates whether the huge voter shift is mischief or heartfelt political commitment—Democrats registering Republican to vote for a GOP candidate who would be easier for a Democrat to defeat, or the Archie Bunker vote shifting to legitimately support a Republican more akin to their views than either Democrat. The migration in the opposite direction could be disgust with the overall Republican presentation. In either case, no such effort appears underway in Maryland, another closed primary state.

The split-image of states with contrasting activity as well as importance is occurring as some states ease voter guidelines while others, mainly Republican and Southern, attempt to limit voter access following the Supreme Court’s gutting of the 1965 Voting Rights Act. Voter suppression has assumed a variety of forms, most notably voter ID requirements and a reduction in the number of polling places. Pennsylvania’s recent Republican governor tried to complicate voter ID requirements but was rebuked by the courts.

But the reverse is also true. Maryland is among 31 states and the District of Columbia that offer online registration. Maryland is a state of foregone conclusions. It is, as the numbers consistently reveal, better than two-one Democrat and predictably midnight blue, has little to offer in total convention delegates or electoral votes, is a presidential campaign pass-through state and is, on the Democratic side, largely committed to Hillary Clinton at the officialdom level. The state’s own offering, Former Gov. Martin O’Malley (D), dropped out after a dismal showing and has been politically quiet since his departure except to perform with his rock band.

Thus, neither party has put on a display of campaign energy or a voter registration drive that may help account for low interest or a measureable change in the voter rolls. Yet this is the first year in modern Maryland history wherein the mayoral election was superimposed on a presidential contest and was considered an adventure in human motivation to increase voter turnout. Even the spirited mayoral contest has not sparked early enthusiasm except among the 21 candidates competing to succeed the departing Mayor Stephanie Rawlings-Blake.

At stake on the Maryland ballot in addition to the candidates are 105 delegates on the Democratic side and 38 on the Republican roster. The outsized number of Democrats includes the so-called automatic super-delegates, elected and party officials who are spared from having to appear on the ballot for fear of an embarrassing rejection. Here, again, the contrast is remarkable: On the same day, the winners in Pennsylvania will pick up 181 Democratic delegates and 71 Republicans. In the Democratic Party, delegates are awarded proportionally by congressional district if a 15 percent threshold is met.

Slates of delegates must be filed on behalf of presidential candidates. For, in effect, voters are voting twice in the presidential primary —once for their preferred candidate and again for their chosen candidates’ delegates. One begets the other.

While political hobbyists and odds-makers are busy following primaries and totaling delegates, Republican Party officials are engaged in quiet connivance over how to salvage the wreckage of their party. One of the ways is denying the nomination. And therein is the paradox of this political season: The Democratic party’s convention rules are fixed and unchangeable; the Republican party’s rules can be changed at any point before or during the convention. The protests on the streets could be more revealing than the convention in the hall.