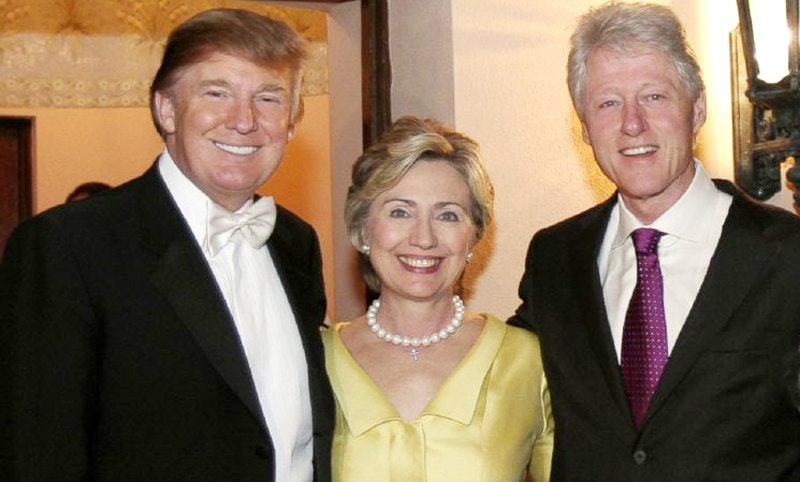 I’d think the fact that Trump’s and Clinton’s daughters remain good friends would be a hint to the Trump supporters that this is all meaningless theater.

It might be more sinister than that. If—I’m just saying if—I were a celebrity rich and famous enough to waltz in and snag the Republican nomination as part of a secret plan to get my friend Clinton elected president in the general, my three-pronged strategy would be: (1) alienate female swing voters with offensive sexist comments, (2) drive away the Latinos (or other watchful minorities) at least some of whom might have been won over by either a Rand Paul- or Rubio-style approach, and (3) play the authoritarian to crush the fragile flowering of libertarian sentiments in my own party (in part by treating the one libertarian among my rivals for the Republican nomination as if he’s just a dweeb).

Trump is a walking death knell for hopes of permanently broadening support for the Republican Party, even if he draws in a few inattentive moderates this time. Trump is such bad news that even the establishment has begun thinking about the unthinkable: trying to turn the Libertarian Party into a serious contender, at least while we more hardcore libertarians await the complete collapse of all government and an eventual end to voting. In fact, you can see the three leading Libertarian Party candidates for that party’s nomination debate tonight at nine Eastern on Fox Business Network, moderated by the guy who wrote my book’s foreword, John Stossel.

You have to admit that whatever happens among those Libertarians is bound to make more sense than major-party politics now does. Ironically, one side effect of a Trump-dominated election cycle is that our political shows have become even likelier to feature the blustering lack of subtlety I used to associate with Mexican television. Maybe Trump is bringing us all together after all.

But as I’ve said before, Trump’s background in professional wrestling and reality TV are his real models, and both those genres teach people that the best way to be noticed is to have an enemy worth fighting. You don’t need to be diabolical Nazi theorist Carl Schmitt, concocting ways to depict the Jews as villainous, to know that people are more likely to cheer for you if you can knock down an enemy such as the Iron Sheik.

In what may be the emergence of a new locus of cultural power, there are a few wrestling-linked political figures now who’ve gotten big boosts from having cool villains to fight. Hulk Hogan toys with entering politics just after he bodyslams reviled Gawker with a lawsuit. Jesse Ventura has the various conspiracies that he exposes or theorizes about. Trump has the Republican establishment, Mexican rapists, Muslim terrorists, “China,” stupid protestors at his events, the press, Michelle Fields, etc. He just might ride their villainy all the way to the White House—or maybe, just maybe, take a good-natured dive when it comes time to fight Clinton and the press urges America to cheer for her in the final round and see him as a hero turned villain.