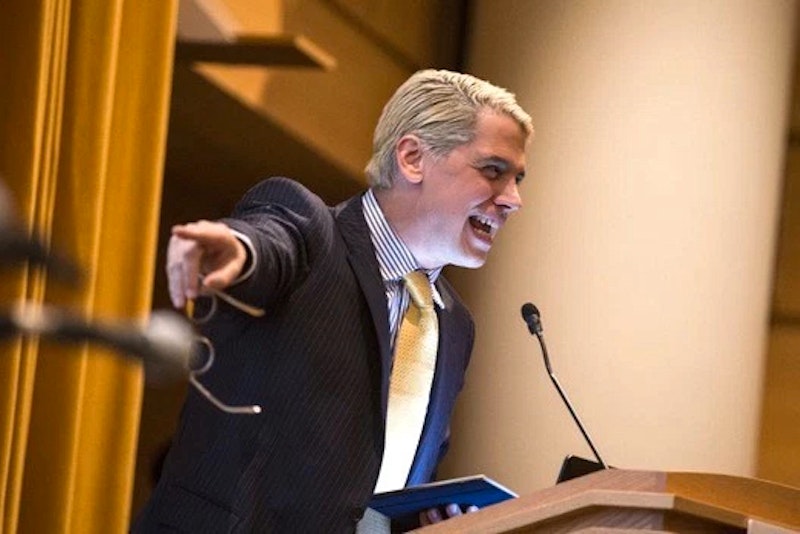 A brash new group of conservatives, the "alternative right," has recently emerged from the shadows, and they're attracting enough attention in the mainstream to be attacked from both the left and the right. The left hates them for what they see as the blatant bigotry of their race-based Nativism, while the right is bothered by their refusal to use "dog whistles" when discussing racial matters.

The "alt-right" now has a new guardian angel to protect them, in the form of Breitbart writer Milo Yiannopoulos, who also went to bat for another widely-disparaged group—the Gamergaters. The narcissistic British professional provocateur teamed up with his regular writing partner, Breitbart's Allum Bokhari, to write "An Establishment Conservative’s Guide To The Alt-Right," a 5000-word breakdown of the incipient movement aimed to assure the stodgier members of the right wing that there's no need to panic over these new conservative enfant terribles. The authors classify the alt-right into four separate subcategories: The Intellectuals, Natural Conservatives, The Meme Team, and The "1488rs."

The Intellectuals are "dangerously bright," having descended from such thinkers as German historian Oswald Spengler, H.L. Mencken, and Richard Spencer, former editor of Taki’s Magazine, who founded the AlternativeRight.com website in 2010. The Natural Conservatives eschew diversity, preferring "familiar societies, familiar norms, and familiar institutions." The Meme Team are young, 4chan-type Internet punks attracted to the alt-right for the "lulz." While they may find Holocaust jokes hilarious, Yiannopoulos and Bokhari assure us they're not really racists. Racism and hatred are confined to the lowest caste, the "1488rs" (nomenclature derived from Neo-Nazi slogans), which the authors claim is used to discredit the entire alt-right movement, even going so far as to claim this “toxic mix of kooks and ex-cons” is some kind of plot to discredit the reasonable white "identitarians" who are truly representative of the alt-right.

Every ideology has their group of mouth-breathers who aren’t welcome in the movement, but are the 1488rs the sole representatives of hardcore racism from the alt-right? To believe this requires accepting that the vast majority of the hateful rhetoric emanating from the alt-right is just meant in jest. There’s a limit to the number of genocide jokes directed at particular groups (Jews and Muslims) before you start think there's more than the thrill of transgression going on. Once you're out of your teens, that sort of talk tends to set off warning bells. The writers claim they've spent the past month tracking down the "elusive, often anonymous members of the alt-right, and working out exactly what they stand for," and they want us to take them at their word.

In 2012, one of Yiannopoulos' Intellectuals, Spencer, published an article on AlternativeRight.com entitled "Is Black Genocide Right?" The article stated that the black race "has contributed almost nothing to the pool of civilization." The writer, Colin Liddell, then asked, "Shouldn't the debate really be focused on whether Black Genocide is something worth considering?" Now that would be a hard one to spin in a positive direction, and it didn't come from the 1488rs. It's right from the heart of the movement this article was written to assure us is populated by reasonable "alternative thinkers."

While the alt-right has recently raised its profile, the movement is still in an inchoate stage. As Yiannopoulos and Bokhari admit in their article, at this stage of ideological development it's easier to say what the alt-right opposes than what it's working towards. The race is on now to define this emerging political movement, and the Breitbart writers are trying to sprint to the head of the pack. They obviously feel an affinity for many of its ideas, and want to make sure the "brand" doesn't get soiled by those emphasizing its dark side, which I'd suggest is much more widespread than this puff piece would have us believe.

Yiannopoulos, whose mother is Jewish, doesn’t want to believe that the alt-right is anti-Semitic, so when he hears the "kike" jokes, he's sure it's just light-hearted banter. His article puts it this way: "The alt-right openly crack jokes about the Holocaust, loudly—albeit almost entirely satirical —expresses its horror at “race-mixing,” and denounces the “degeneracy” of homosexuals… while inviting Jewish gays and mixed-race Breitbart reporters to their secret dinner parties. What gives?"

That doesn't sound like a party I'd want to attend if I were a gay, mixed-race person, but maybe I'm too sensitive. It's difficult to trust Yiannopoulos’ depiction, based on his "thorough research," of the alt-right as a collection of reasonable people who are just unsatisfied with the status quo. Maybe that's because he rationalized the actions of the man who murdered 10 people at an Oregon community college last year as a suicide by a victim of a society that doesn't treat boys well. He also told Joe Rogan on Rogan's podcast that he'd take a "gay cure" if it were possible. I wonder if he'd choose not to be Jewish too. Maybe it's his self-loathing as a gay Jew that makes him happy to attend these secret soirees thrown by Jew-baiting gay bashers. This was a good try by two Breitbart writers to give the alt-right a warm and cuddlier persona and welcome them into the mainstream, but I'm not buying it.