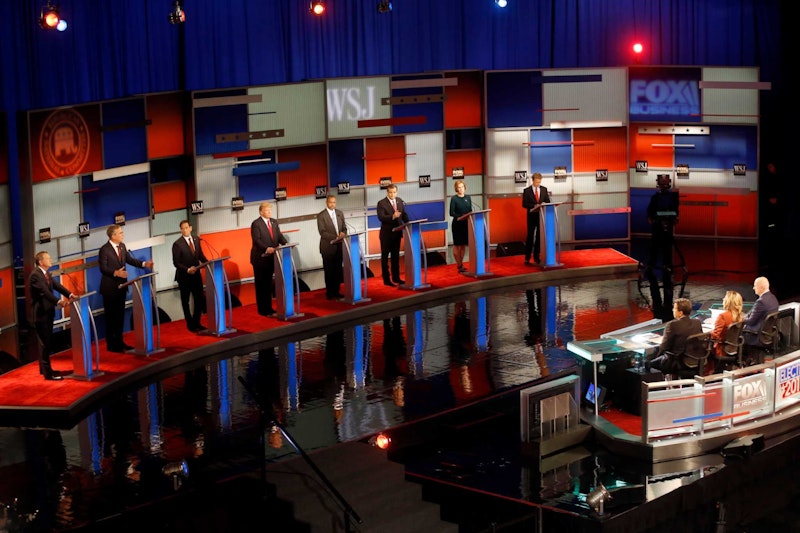 “It sounds like a game show, but it's not,” says Neil Cavuto. He means the sort of ding-song sound they use for cutting off candidates. I guess they wanted something intrusive but not overbearing. The ding-dong was friendly but giant size. It was homey but seemed like a hallucination. And loud as it was, it was only sort of there, kind of there. The candidates' vivid, unlikely faces—Carly Fiorina's was especially choice—fidgeted and mouthed until a merry pealing was triggered. But no one could hear the pealing. Whichever face that was dancing, it continued to dance. Ted Cruz sailed through, his voice lofting higher as the ding-dong lifts it. Only John Kasich seemed to live with an awareness of the thing. He raced defiantly past it, piling on words after he finished his list of Middle Eastern countries that he knew something about. He was having his triumph against the machine.

People complained about CNBC's management of candidate time. Candidates ran over, candidates didn't get heard from. The Fox Business Network debate was supposed to show how the trains should run. But candidates still took too much time. The big difference between this debate and CNBC's is that this debate gave the candidates questions they liked. Of all the year's debates, this one was the least challenging. Pre-debate, the Fox Business moderators took pains to warn the candidates against seeming like whiners and crybabies. But the babies sure got their bottle. The mods offered up subjects and left it at that, except when they worked in some points against the Democrats. Post-debate, Donald Trump and Ben Carson were burbling their pleasure at the questions. Cavuto, modest, kept letting everyone in on the secret. The moderators knew it wasn't about them, he said.

The moderation was so obliging that the candidates could work in subtle bits of business. Cavuto asked what was supposed to be a reality-time question, and Cruz answered “Well,” with a reflective dip in his voice, and then proceeded. The dip gets me. It was such a precise shading: it had a friendly, indulgent sound, and an air of let's-all-think-together. Cruz was relaxed enough that he could work this inflection into his voice. For Cruz, Cavuto's get-tough question was like something a feed would say. There you have the debate. The candidates were there to be seen as they wanted. They modeled their goods and cut their swashes.

Fiorina hauled zero-based budgeting from history's shelf (what mileage Jimmy Carter got from that gag in 1976) and talked about it as if this were the operation that would save you from stomach cancer if only you would listen. Fiorina and Marco Rubio both went hard for imperial glory and America the Dominant. One gave the gong a whack, and the other did, and both received good hands. Rubio threw in some “They hate us for our freedoms” (not a direct quote, a description of theme) about the Muslims. One reads that he calls Sheldon Adelson every other week.

Rubio made an interesting lateral move. Instead of slashing at Jeb Bush or Trump, he took a swipe at Rand Paul. “I know that Rand is a committed isolationist,” he said, and a blade was in his hand. Yet his move didn't work out. If you want to push somebody around, and show your imperialist leanings at the same time, Paul seems like a good target. But he isn't a cooperative target. He was ready to mouth off in response and scored his best string of moments in any of the debates. For once Paul sounded like he was running for some purpose beyond broadcasting his voice. “You can be strong without being involved in every civil war around the war,” he said, and it was the best policy line of the evening.

Of course, Paul also felt free to be his drawling wise-guy self, the kid who cuts through dorm room debates because he's read half of Adam Smith. “Hey, Gerard, you know, we might want to point out China is not part of this deal,” he said, truthfully (the deal was the Trans Pacific Partnership, and Trump was laying into it) but insufferably.

The Big Two, plus one.  Ben Carson said Hillary was a liar. Trump played mellow and at one point remarked loudly that everybody on stage had a better tax plan than the disaster in place. Snagging the good sport award is usually a Rubio thing, but Trump wants to look more like a leader and less like a rolling grievance.

Being Trump, he mentioned at one point how well he and Putin had got along backstage at 60 Minutes. The good vibes may explain why Trump feels so perky about Russian fighter planes in Syria. He talked about their doings while Jeb Bush tried to protest. “They blew up—” Trump began, and then, because of Bush, he said, “Hold it.” Trump started again. “They blew up—” he said, and Bush tried again. Trump got a bit peeved around the edges. “Wait a minute,” he said, very New York.

What had Bush been trying to say? The transcript records only “BUSH: (INAUDIBLE).” Jeb had that kind of debate.