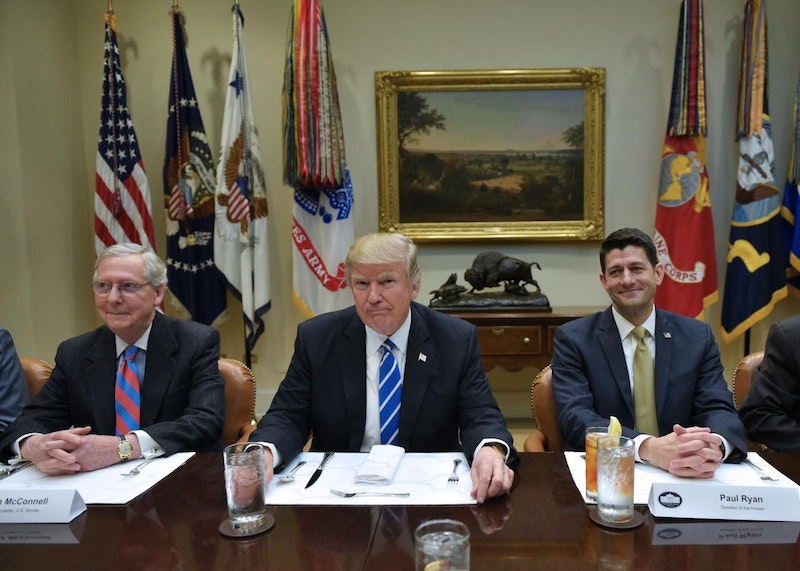 Having Donald Trump in power is good for the Republican Party. Anyway, that’s what members of the Republican National Committee told McClatchy: “In conversations with RNC officials from across the country, gathered here at a sprawling resort this week, the vast majority of them expressed positive views of Trump, pointing to his help in fundraising for the party, his work on rolling back regulations and his appointment of Neil Gorsuch to the Supreme Court.” The story offers this vignette: “Two RNC members were even overheard in a heated hallway argument over just how strongly one had initially supported Trump. The right answer in that conversation, clearly, was: from the beginning.”

On the other hand, Politico tells us the White House is having trouble filling jobs, and that one reason is this: “The easy pipeline to RNC staffers, which existed under former RNC chair Priebus, has dried up with his departure from the West Wing.” Reince Priebus was chief of staff until Trump kicked him out. He lasted just half a year, and at one point Trump had him chasing a fly that was buzzing around.

The RNC makes money off the Trump presidency: the contributions come in. But the RNC’s people will be a distance from the White House. Arrangements like this come about when respectable people depend on dangerous, unstable forces. How unstable? Well, consider this. It was raining the weekend of May 5 and the President couldn’t play golf. Instead he dictated a letter saying just what he thought of Mr. James Comey, his uppity and disloyal FBI director. On Monday he presented this letter at the office, making it clear that he was going to fire Comey and that here were his reasons.

Staff prevailed on the President to substitute a different letter, this one citing Comey’s mishandled investigation of Hillary Clinton and her emails. That’s the one that went before the public. But the first letter continued to exist, and now the special counsel has a copy. The New York Times, in reporting this, admits it has not seen the letter, which Trump dictated to the highly verbal Stephen Miller. Still, the Times says, “Several people who saw Mr. Miller’s multi-page draft described it as a ‘screed.’”

Most people assumed that Trump lied when claiming he’d fired Comey over the emails. They didn’t assume that he would’ve dictated a document laying out his true state of mind. One can’t call this the Trump touch, since merely firing your FBI director for a false reason counts as the Trump touch. But that first letter demonstrates how we underestimate the Trump touch. Following Trump, we turn a corner from the normal, and another. What we have to realize is this: the sidewalk isn’t going to go straight. It’s just going to be corners for a while, and behind every one of them will be something new and not easy to deal with. That’s the situation the RNC has landed in because of Trump. The Rankers deal with this by keeping their distance from the White House. Unfortunately for them, the whole country is in a similar mess, and they’re in the country.