Ricky Javon Gray gets lethal injection or the electric chair. 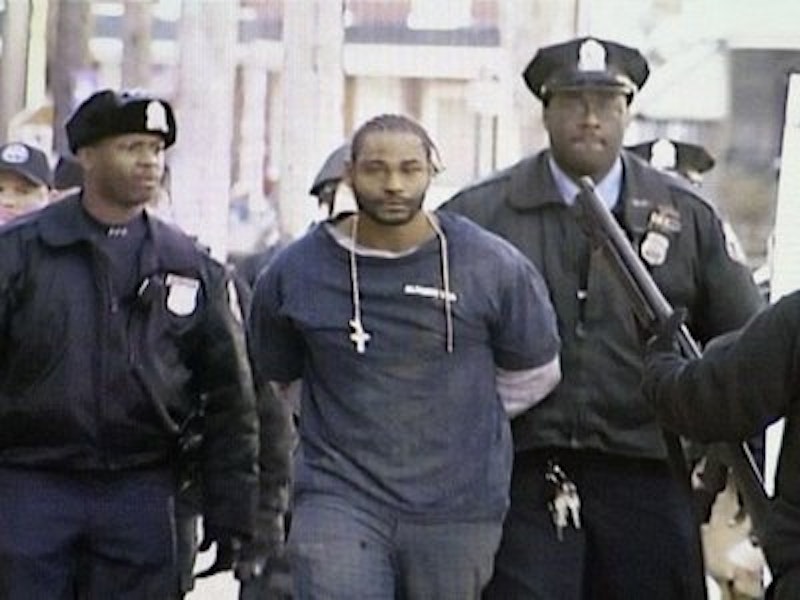 The state of Virginia has a problem, or so officials claim. Convicted murderer Ricky Javon Gray is scheduled for execution on March 16, but the Virginia Department of Corrections is now suggesting they don't have the right drugs to get the job done. Virginia "accommodates" those it sentences to death by giving them a choice of the electric chair or lethal injection, and Gray now has until March 1 to state his preferred method of death. If he chooses not to do so, lethal injection is the default method, by law.

Presumably, Gray hasn’t been informed of a possible drug shortage, and I assume the Department of Corrections is hoping he'll choose the chair, as they have plenty of voltage. That wasn't always the case, however. In 1952, a lightning bolt struck a power line at the Virginia State Penitentiary, and Albert M. Jackson couldn’t be executed on schedule. Jackson was a black male sentenced to death for raping a white woman. His lawyers argued that since the electric chair was first used in 1908 in Virginia that 50 black men, and no whites, had been executed for rape. Virginia has a long history of executing whites only for murder. Although a prison official at the time called the lightning strike "an act of God," repairs were quickly made, and Jackson was electrocuted.

Official statements from the state regarding the lethal drug issue are now arousing the suspicions of anti-death penalty activists, who suspect that the real intent is to get legislation passed that would make the electric chair the default killing method. In 2015, Virginia Department of Corrections got three vials of pentobarbital from Texas (repayment for Virginia doing the same for them in 2013) and it appears that it used only one of them to execute Alfredo Prieto. Nobody has been executed since, so that leaves them with two vials, but Virginia officials are claiming that’s not enough, although they have refused to provide an explanation.

American drug manufacturers have stopped making drugs for executions and European makers won't sell them to prisons. Texas used to trick pharmaceutical companies into sending the drugs to a hospital, but once that ruse was exposed they had to turn to in-state "compounding pharmacies," which are not regulated by the FDA. Compounding pharmacies exist to provide drugs for specific patients that can't be obtained commercially. They’re regulated by the states so, in essence, Texas is producing its own pentobarbital to be used for its imprisoned "patients."

This brings up Eighth Amendment issues regarding cruel and unusual punishment. The FDA, which is charged with ensuring the quality of most medications sold in the U.S., now has no role in controlling drugs made specifically to kill people. As Texas does not divulge the drug compounder it uses, public scrutiny of whether or not the quality or potency of the pentobarbital varies from batch to batch is impossible. Just the sort of public scrutiny that could have helped in such debacles as Oklahoma's botched 2014 execution of Clayton Lockett. On April 29, he was tazed in his jail cell and taken to a gurney, where he was strapped down and injected with a cocktail of drugs never before used for an execution. Lockett died 43 minutes later, after writhing and convulsing in agony. The experiment was a massive failure, not to mention moral abomination.

Ironically, executions were initiated in Virginia as the white man's response to lynchings. Speedy trials and the death penalty against blacks meant Virginia had fewer lynchings than any other Southern state from 1880 to 1950. Alfred Wright, a black youth charged with raping a white woman on June 27, 1912 in Appomattox County, was tried, convicted and sentenced to death two days later. While accused blacks at least got due process before they were executed, a racial disparity remained. Rape in Virginia, for example, was still a capital crime for blacks only, when the victim was white that is.

Virginia wants to execute Ricky Javon Gray to satisfy some sort of visceral need for retribution. However they end up killing him, it won't make the state safer, even though it may make the victims' families feel better. He and his accomplice killed at least nine people in 2006, including girls nine and four years old. Gray should have to die an old man in prison, but now he's being asked to choose how to be killed. Let's see what happens if he picks lethal injection, which is the more "humane" alternative. Virginia says they can't accommodate him, but they do owe him that one last final favor.