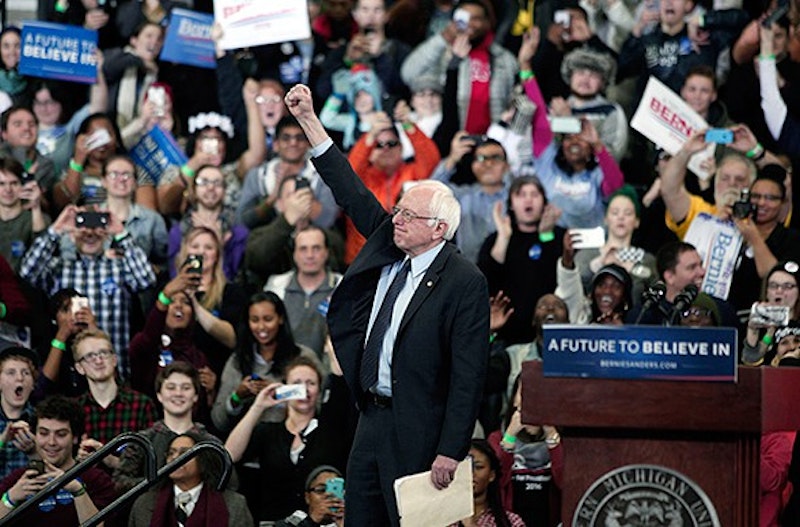 Remember the campaign flap earlier this month in which civil rights legend-turned-Congressman John Lewis criticized Bernie Sanders, saying he didn’t remember ever meeting Sanders back in the 1960s? This was followed by a wave of stories about the vicious response to Lewis’ comments from Sanders loyalists, in which these “supporters” called Lewis a “sellout” and “Uncle Tom.” In writing about this, the website Atlanta Daily World used the headline “John Lewis called ‘sellout’ and ‘Uncle Tom’ for endorsing Clinton over Bernie Sanders.” The Daily Beast, in a piece called “Bernie Sanders’s Big Problem With Black Democrats,” said, “campaign loyalists… called Lewis a liar and an Uncle Tom.”

The problem was, the Atlanta Daily World story quoted precisely no one as calling Lewis either slur. The Beast piece quoted no one calling him an “Uncle Tom,” and attributed the “selling out the African-American cause” position to one guy with 85 Twitter followers.

Did anyone who supports Sanders call Lewis an Uncle Tom or a sellout? Someone probably did. But does such a comment by a blog or YouTube commenter or Twitter user with an egg avatar amount to news? Does it convey anything about the campaign or candidates? No, it doesn’t. And if you’re a reporter filing an article about how supporters of Candidate X used Racial Slur Y, you’d better make sure to quote such a supporter saying that thing.

This used to be called “nutpicking,” in the early days of blogs. It’s a popular trick of Bill O’Reilly’s: Pick out a random comment from a random nut from a 1000-comment thread on the Daily Kos or the Huffington Post, and attribute that comment to “liberals.” Then, if you’re feeling particularly bold, go ahead and ask why so-and-so political candidate hasn’t yet denounced such an outrageous comment. The rise of social media has made nutpicking even easier.

There’s a lot I love about Twitter. It makes following politics (and other things) more fun and informative. But one of its major downsides is that if you’re looking for a particular terrible opinion, somebody on there probably has it. And the way Twitter is structured makes it difficult to determine whether something is a legitimate, widespread phenomenon, or merely a tiny subculture that’s very loud, and may not convey anything in particular about those with whom the subculture likes.

We saw this with the “Bernie Bros” phenomenon. Are there sexist jerks who support Sanders and respond to Hillary Clinton backers with misogynistic vitriol? Sure! Is there any reason to think there’s more of this with Sanders than any other candidate, ever? Not really.

The right-wing version of this is “cuckservative,” the porn-derived insult seemingly directed at pretty much every Republican besides Donald Trump, by “alt-right” tweeters with active sexual imaginations who sincerely believe that the biggest problem with the right in the Obama years was that they weren’t overtly racist enough.

I’ve read dozens of articles in the mainstream press in recent months about both Bernie Bros and the anti-cuckservative crowd. But I’m still not convicted that either is any type of widespread phenomenon—the “cuckservative” references, in particular, seem to always come from the same dozen or so people. And besides, it’s hard to think of any political figure (or a band, or a movie series, or really anything else that’s even slightly popular) that doesn’t have a coterie of terrible, hateful online fans.

(Trump, meanwhile, is different—in his case, the hateful comments come not from random supporters with 25 Twitter followers, but rather the candidate himself.)

Also, Twitter isn’t that important. Most people aren’t on it. Compared to Facebook, its reach and importance are minimal. But do you know who is on Twitter? Every journalist. And journalists know that they can always write a story based on 15 embedded tweets and call it a day.