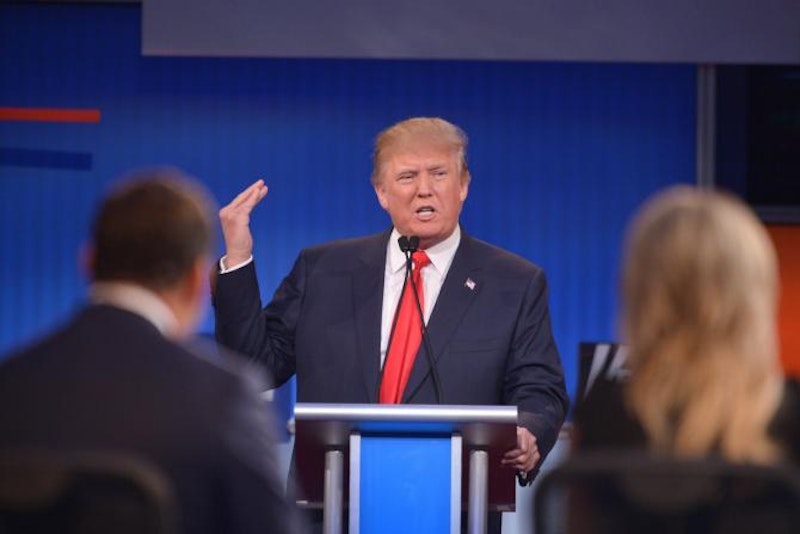 Yesterday morning, while I was lying in bed listening to Beetlejuice play “Five” (the game where every answer is “five”) on The Howard Stern Show, the audio dipped out and a bulletin ringtone bounced out from my phone. “What’s two plus three?….seven..thirteen!….” I figured someone else had kicked it—famous people dying is the new spree shooting—but no, it was just a ***SPECIAL REPORT*** from The New York Times about Donald Trump. Wonderful! Did he end up punching that protestor in the face? Did he shoot someone on 5th Ave.? Has his mongoloid clementine-colored illegitimate child come forward looking for college tuition money? Can’t wait to see what this is all about… “Donald Trump considers himself a power broker of influence in New York. Our reporting suggests otherwise.” Snooze. As Bob Grant used to say, get off my phone!

I know Times employees need to justify their salaries, but this piece is about as urgent as a Ben Carson speech. It might fit as filler, but to blast it out as a “Special Report” as if it were the catalyst that would finally set Donald Trump’s campaign aflame is sensationalism. The Times looks foolish and dated, because in case you haven’t noticed, Trump’s supporters don’t really care about the details. On CNN yesterday, before the caucusing began in Nevada—and eventual landslide win—I saw a reel of diehard Trump fans explaining why they were voting for him. “He’s a do-er. You can’t make it in this state if you’re not a do-er. He was the chief executive of an international corporation, and I know he can get things done and make deals.” These people don’t care if Trump’s real estate holdings in New York are “modest,” or that he isn’t considered one of the Top 10 developers or power players in the city. He shoots from the hip and he says what he’s thinking—and that’s enough!

Who is this piece aimed at? A chunk of New York Times readers have felt the Bern so bad for months they’re starting to wonder if it’s venereal, or they’re dyed-in-the-wool Clinton supporters who are convinced she’d trounce Trump in the general election. Times editors must know they’re pissing on a house fire, so what’s the purpose of this special report? There’s nothing of note, except for this fabulous Trump line: “Though he portrays himself as a major developer, his companies’ highest profile ownership stakes in real estate in New York include an office building on Wall Street; part of another on Avenue of the Americas; commercial space at Trump Tower on Fifth Avenue, where he lives; and parking below the Trump Plaza on East 61st Street. ‘It’s a very successful garage,’ he said in a telephone interview.”

As Super Tuesday approaches, it’s unbelievable the media is still chasing its own tail when it comes to Trump. He could have the nomination wrapped up by March 2. Perhaps the Times is already playing for the general election, attempting to dissuade moderates and Democrats who are considering voting for Trump but would never admit it in public. Perhaps those voters might care a bit more about the details, but maybe not. For those people, Trump is the “fuck it” vote, not so much a Hail Mary pass as a gesture of patriotic gallows humor. The Times embarrasses itself with pieces like this that clearly appeal only to those readers who revel in turning their noses up at others who they perceive as dull or under-educated. They could have a very rude awakening come next week, and maybe in November.