Because of the Iraq War, you GOP morons. 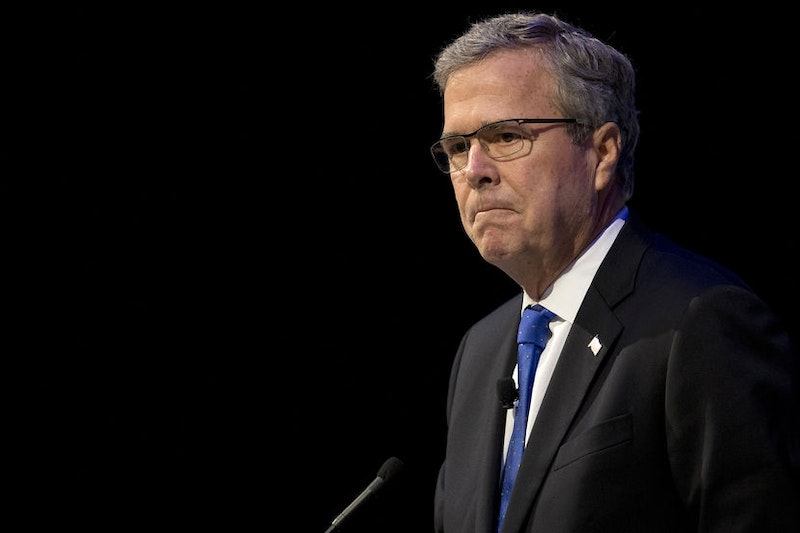 Some clever people designed a poll in which voters gave the first word they thought of on hearing various candidates’ names. As you might imagine, the choices were neither flattering nor surprising. For Hillary, the first word was “liar.” For Trump, it was “arrogant.” For Jeb, it was “Bush.”

After the disaster of Jeb Bush’s candidacy, some backseat drivers told The Washington Post his big mistake was to spend the six months of his pre-campaign raising money instead of broadcasting his unique appeal. “We didn’t use that time to introduce him as a unique brand,” mourns a GOP hack who kibitzed the Jeb! effort. Presumably the fellow means nobody made clear that Jeb was running for bigger reasons than his last name. What the fellow doesn’t get is that Jeb should have changed his last name.

This realization had to sneak up on Jeb’s band of sure-handed, seasoned, hardened professionals (“most of Bush World are pros… we have the experience on our side,” a heavyweight donor said in September). A couple months of freefall wasn’t enough to clue them in, they needed some internal polling. Then at last the penny dropped. “Bush stuff was holding him back,” a Jeb apparatchik told the Post. “We obviously knew it was an issue, but even still, the gap between it and other issues—I don’t think we thought it would be that big.” It was big to the tune of 66 percent or so of voters surveyed. That’s how many had, in the Post’s phrasing, “issues with Bush’s family ties.”

Running wasn’t Jeb’s idea, or so we’re told now. The New York Times announces that “old friends and a powerful network of Bush donors pleaded with him to become a candidate, assuring him they would raise the required money.” On the other hand, a Republican macher says he met with Jeb in 2014 and found him gung ho. “He definitely wanted to run,” the macher said. “He’s always had it in him and knew this was his last chance.” Either way, not just Jeb but a bunch of other wealthy, important Republicans with their hands on the national levers all thought that another Bush candidacy was just the thing. They saw no big risk to the idea, nothing that would keep them from putting up $120 million.

I think most other people in the country could’ve spotted that risk and pinpointed its nature. Maybe not political reporters, whose Jeb obits use delicate phrases like “Bush fatigue” and “a pedigree he could do nothing to erase or dilute.” But everybody else. Being the son of George H.W. Bush, man of long ago, wasn’t such a problem. Being the brother of George W. Bush was a huge problem. It was crippling. As soon as Jeb became a candidate, he had his foot in his mouth regarding the Iraq War. Shortly before Jeb stopped being a candidate, Donald Trump told the voters of South Carolina, land of military bases and supposed Bush diehards, that George W. had bobbled 9/11 and lied us into Iraq. Trump finished as the primary’s winner; Jeb finished with seven percent and a shallow grave.

Note that the man the establishment gave $120 million never polled well with his party’s voters. As of April 2015, a month before he became a candidate, 538 found that the alleged frontrunner averaged just 54 percent approval among Republicans. Mike Huckabee, nobody’s frontrunner, managed 58 percent. Jeb’s negative rating was the highest of any Republican except the traitor Chris Christie, the man who helped Barack Obama look good when Sandy hit just before the 2012 vote. Trump doesn’t show up on the polls’ list of contenders. Jeb was ready to bleed; then Trump came along and Jeb bled plenty.

Last spring the Republican establishment didn’t see a problem, and even now they don’t know what the problem was. Here are some quotes that bob up in the Jeb post mortems. “The rules all changed this year. It was all about taking on the establishment.” “The biggest thing they did miss was miss just how angry the American electorate was…” “At a time when so many voters are anti-establishment and angry at the government…” Oh, “At a time when”! The dopes eating lobster roll at Kennebunkport talk like the leaves changed color or hemlines fell.

Ask Tea Party types, or just about any GOP voter, and you’ll hear a different story. Republican voters are furious at the Republican Party because the party has spent a dozen years or so doing things that the voters don’t like. Notable among these things is the war that Jeb Bush’s brother gave them. Notable among the things the voters like is, well, nothing. The Republican Party has done a poor job of gauging realities and coming up with policies, and George W. Bush has been the flagship of this failure. Naturally the party bigshots figured another Bush was just the ticket.

Looking over Jeb’s stumblebum march, big-league Republican insiders have told reporters that the candidate was “coddled” and that “he’s insulated from what’s actually happening out there.” He was, yeah. I’d say there’s a lot of that going around.