Get Ready for President Deadpool

Democrats are kidding themselves that Clinton would destroy Trump. 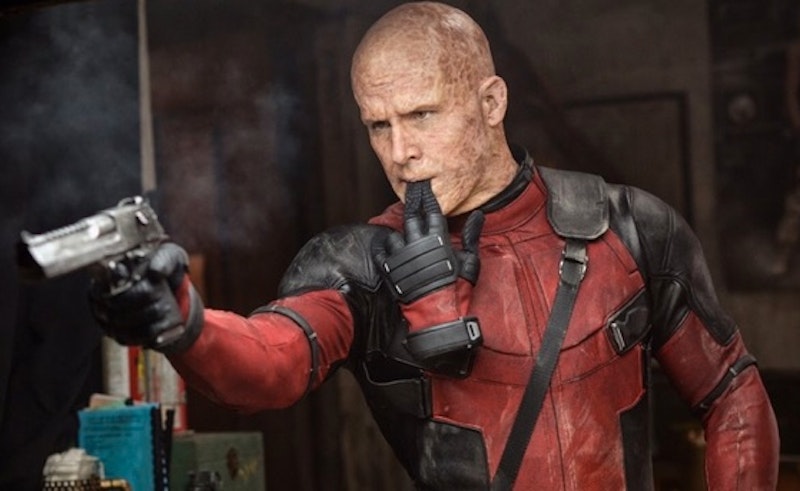 It’s an imperfect political analogy—what isn’t in 2016—but in the increasingly likely general election match-up in November, Donald Trump is Deadpool’s madcap/villainous/fun Wade Wilson to Hillary Clinton’s “thee” and “thou” Katherine in the stultifying The Witch. So let’s suspend, at least for now, all the handwringing and ostentatious display of worry beads, and just admit that if Trump and Clinton compete this fall it’s a crapshoot as to who will win. Let’s sit back and have a ball! That’s Trump’s plan—and now obvious that he’s run his campaign on the fly since last June—and ignore the media scolds like NBC’s Chuck Todd who tweeted yesterday that the vicious rhetoric had to be dialed back, for the sake of democracy, of course. (Never mind that the TV stations, greedy for ratings like Trump’s greedy for attention, are a de facto Super Pac for the obnoxious candidate.)

I saw both The Witch (Saturday) and Deadpool (Sunday) this past weekend, and while the former—set in 1630—made me feel like I was back in a particularly dull and pious Sunday School class, the latter was a dumb, often hilarious romp, a pastiche of American culture from the 1980s to the present time. Deadpool, a surprise blockbuster, pulling in $235 million in its first two weeks, zips by, as its star Ryan Reynolds chums it up with an immigrant cabbie, kills enemies with crazy weapons, bags a smoking babe, references Sinead O’Connor and Wham!, zaps social networks like Twitter and says whatever’s on his mind, no matter how offensive. Sort of like Trump. The audience I was part of roared at most of the 518 jokes, and though this kind of film is not my usual fare, I left in a good mood, appreciating a ramshackle farce.

If Trump is denied the GOP nomination, I have no clue how that’ll happen. His remaining competitors—we’ll skip Veep hopeful John Kasich; and don’t think for a minute he wouldn’t jump at joining Trump’s ticket—Ted Cruz and Marco Rubio certainly look like Deadpool victims. Cruz miscalculated with his dirty tricks, first against the hapless Ben Carson, then Rubio, and couldn’t even draw enough Evangelicals in South Carolina to finish better than third place. Rubio, for his part, has regressed as a candidate: every week it seems like he loses a year and is now rapidly approaching a second adolescence, with his constant (I mean fucking non-stop) invocations of God, not to mention his brownnosing Eddie Haskell demeanor or flip-flops on just about every single issue. I’ve lost my enthusiasm for the Florida senator—whom I thought at the outset was really a pro-immigration tax-cutter who’d put his noxious moral values in his back pocket. Cruz is just a scumbag, a mean demagogue who pretends he’s a hayseed Bible Belter instead of a well-educated politician who yearns to lead the “new” GOP establishment.

God is not going over well in this election: Trump got into a scrape with the Pope last week and it didn’t matter. He claims he’s a serious Christian, but that’s baloney and, like voters, he knows it. It’s just something to say. Trump’s also dabbled in 9/11 Truther jabber, but that’s shtick: just like all the nonsense about forcing the Mexican government to pay for an enormous wall, or his boast that he’d be the best president ever, aside, maybe, from Lincoln. He’s an entertainer and that’s what Americans apparently want in a president.

The media, both liberal and conservative, is going bonkers right now, and anyone who doesn’t get a kick out of it was denied a funnybone at birth. What I especially relish are Democratic writers, who admit they’re voting for Clinton, lecturing the GOP on how to stop Trump. My latest political jam is a barrel of monkeys jumble of words from Harvard’s Danielle Allen in The Washington Post. She sets the tone in the first paragraph: “Leave aside whether a direct comparison of Trump to Hitler is accurate.” Okay, I will, you ninny! Then Allen pleads with Rubio, Cruz, Kasich and essentially all well-connected Republicans to pledge they won’t support Trump if he’s the nominee. She concludes: “Donald Trump has no respect for the basic rights that are the foundation of constitutional democracy, nor for the requirements of decency necessary to sustain democratic citizenship. Nor can any democracy survive without an expectation that the people require reasonable arguments that bring the truth to light, and Trump has nothing but contempt for our intelligence.”

Trump also has “nothing but contempt” for Hillary Clinton’s hypocrisy on income inequality (her six-figure speeches, sleazy Clinton Foundation) or championing women’s rights when she famously enabled her philandering husband.

As of right now, as Super Tuesday beckons, Democrats are in deep denial, believing that the Clinton Machine would destroy Trump in November. (I admit that a change of course might occur: Trump melts down from some unforeseeable gaffe, Clinton gets indicted and The Bern takes over, and, it’s only February.) But here’s what Democrats don’t get: Hillary’s a fine-tuned politician who has money, organization and institutional support, but she’s like an American soldier in Vietnam who’s stymied by Vietcong shooting from trees. Trump’s all over the map: he’s courting union votes now, has all but abandoned a pro-life position, and says he’ll punish countries like China and Mexico, which are stealing jobs. Will he really impose a 45 percent tariff on Chinese goods? Not likely: even if he really wanted to, Congress would thwart him. Like the film Deadpool, Trump’s throwing everything out there, and Americans are lapping it up, even if they won’t admit it to friends. Of course, Trump might lose in a landslide, but he could also pull a Reagan in 1980—remember that Democrats were delirious he was the candidate against the feckless Jimmy Carter—and win comfortably. I don’t know how any honest person could look at this likely fall race and not admit that it’s a toss-up.