Venezuela’s Not Simply a Failure Of Socialism

Conservative pundits fail to identify non-socialistic contributors to the catastrophe. 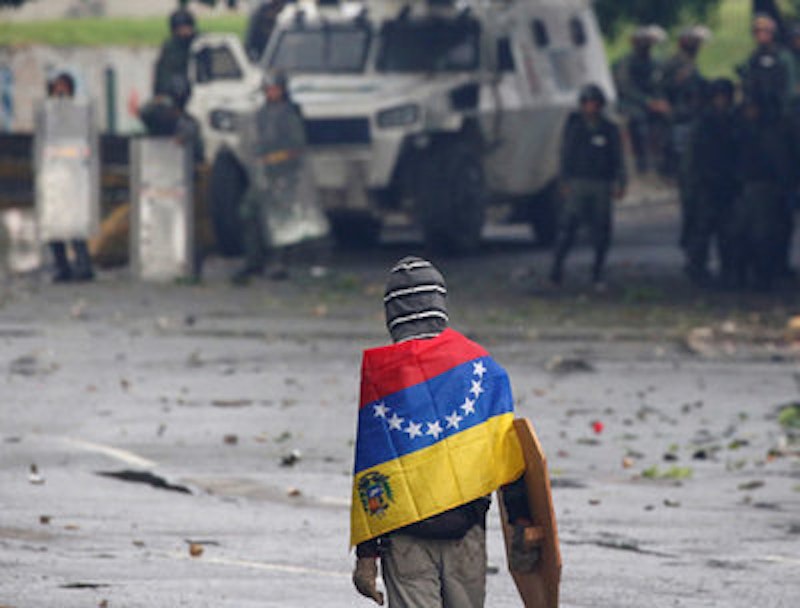 Now that Venezuela has descended into such chaos and misery that war’s become a very real possibility, right-leaning pundits are saying, “I told you so.” To them, the current 700 percent inflation rate and dearth of basic necessities is the inevitable denouement to the same old socialist story that always starts off so full of hope of prosperity shared by all. Venezuelans are so hungry they're hunting dogs in the streets of Caracas and eating out of dumpsters, all because of Marxism. You can read countless articles on the topic, but too many of them are generic. They read as if a software program generated them.

Barton Hinkle, writing for last Sunday’s Richmond Times-Dispatch, offers a prime example of this cliché. “Venezuela,” he writes, “provides... a stark warning for socialist sympathisers on the left.” Then he explains that the current emergency state of that nation is “the inevitable outcome of the Venezuelan government's policies.” What he fails to address is that far more than merely socialist policies has contributed to this economic catastrophe.

Building your nation’s economy around an abundant, valuable commodity isn't a socialist principle, but that's exactly what Venezuela did when Hugo Chavez was in charge. It was a critical mistake, as one of the key reasons the nation can't escape from its economic death spiral is its lack of economic diversity. Now that oil prices have tanked, the petrodollars have dried up just like the food supply. Hinkle writes that socialism apologists blame low oil prices on the crisis, but that many nations depend on oil revenue and haven’t sunk to such depths as Venezuela. “Maybe the problem lies elsewhere,” he says.

The problem is multi-faceted, but Hinkle only mentions the ones that fit his storyline. While he makes valid points about socialism’s role in wrecking the Venezuelan economy, and calls out “useful Hollywood idiots” like Sean Penn and Michael Moore for mooning over the Venezuelan socialist paradise, there's much more to the story than he’s letting on. The economy of what was not long ago the wealthiest nation in South America hasn't crashed and burned simply because of socialism. If it did, then why aren't the citizens of Bernie Sanders’ beloved Sweden losing 19 pounds per year like Venezuelans? Some might argue that Sweden isn't really a socialist country because the state hasn't nationalized the means of production. It provides all the “free stuff” that the same people go on about when attacking socialism. They can't then turn around and say Sweden’s not a socialist country because they're eager to prove another point.

Scandinavian democratic socialism is one form of socialism, and Venezuela has another. Chavez’s, in many ways looks more like Bonapartism than socialism. Bonapartism (a term birthed in 19th-century French politics) describes a situation in which the upper classes are exploiting the have-nots, and a military, police, and state bureaucracy intervenes to establish balance. Under such a regime, there's a “new sheriff in town” who’s going to crack down on the elites and make sure the common people are provided for. The proleteriat make a bargain to sacrifice their agency in exchange for economic security. Chavez, nicknamed "el Comandante,” was a former military officer with a strong authoritarian streak that was tempered by populist rhetoric. He was right out of Bonapartist central casting.

Chavez, obsessed with power, curtailed media freedom and put his opponents in prison. He supported gangs that disseminated propaganda and physically intimidated poor communities. Any person or institution he wanted to get was an agent of American imperialism. Chavez built his power base around a cult of personality, and kept his ties with the military as insurance. Dictatorial wielding of power is not inherent to socialism, but it's been a major factor in dooming Venezuela's failed experiment in 21st Century Socialism.

Hinkle, by way of explaining why socialism alone has wrecked a once-thriving nation, quotes three paragraphs verbatim, written by Dario Pays, former Chilean ambassador to the Organization of American States. In short, socialists want to spread wealth so they print cash because that's easy. This weakens the currency, prices spike, so they impose price controls, which disincentivizes businesses to produce things for sale. Then the government takes over the business and runs them poorly, and when there's unrest, the government responds tyrannically.

The above scenario has, in fact, played out in Venezuela, but that still doesn't mean that “socialism” itself has produced hyperinflation and all those empty shelves in Venezuela grocery stores. Why has Sweden averaged only 3.58 percent inflation from 1980 to 2017 with all the free stuff it's handing out? Nicolás Maduro is now President of Venezuela, but he inherited Chavez’ mess. It was Chavez’s socialism/Bonapartism hybrid that sucked the life out of Venezuelan democracy and weakened its institutions to the point where the nation’s not strong enough to pull itself out of an abyss. When a cult of personality, rather than just an ideological set of ideas, brings on a political disaster, you can't blame it all on the ideas.