And he’s getting ready to rumble. 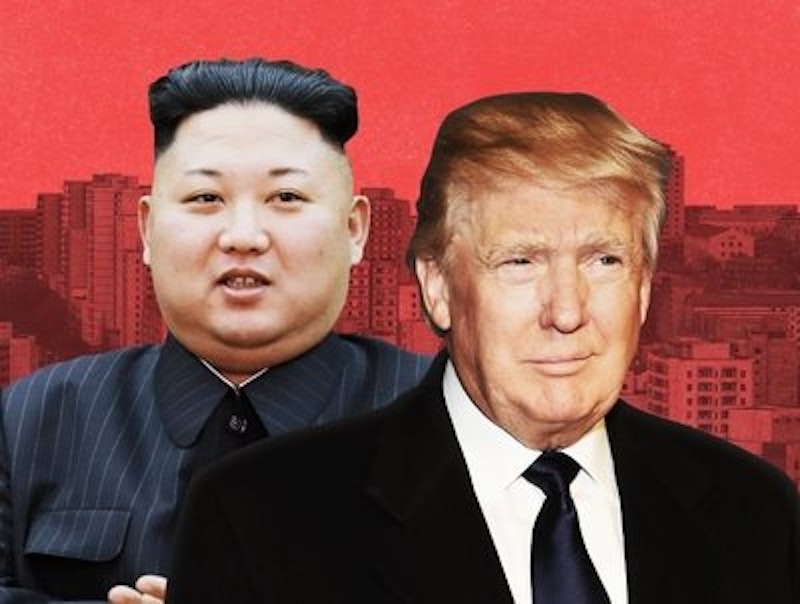 America hasn’t settled the first war in Korea and President Trump’s belligerent words could start a second. Or would it be a continuation? Baptist Pastor Robert Jeffries, a Trump confidant, claims the Bible gives Trump the authority to blast North Korean leader Kim Jong-Un out of his undershorts. And Secretary of State Rex Tillerson tells Americans to get a good night’s sleep because the nuclear bluster is all just talk.

Huh? Just who, it is fair to ask, are Americans supposed to believe when the nation’s leaders are talking past each other and some consecrated Elmer Gantry says his countrymen don’t know how to read the instructive scriptures. Trump said North Korea’s provocations will be met with “fire and fury like the world has never seen,” and it’s his finger on the button. The White House, of course, tried to air brush the statement by saying it was merely Trump’s colorful way of speaking. But the voters are justified in asking whether we really have two loose cannons out there.

Warming to the global attention and nuclear shouting-match, Trump torqued up the noise level instead of toning it down. Contending that maybe his initial statement wasn’t tough enough, Trump offered that “things will happen to them [North Korea] like they never thought possible” if they attack America, its territories [Guam] or any of its allies. Trump issued still a third thunderclap, warning North Korea that the U.S. Military is “locked and loaded” and ready to strike.

We’ve seen this before. Jong-Un, when not murdering relatives or getting Vaudevillian haircuts, trots out a few missiles to un-nerve the civilized world. Only this time he’s playing with live warheads that could possibly reach American shores. And it’s equally true that two superpowers, America, along with Russia, possess the world’s deadliest nuclear arsenals, which Trump claims, upon taking office, to have ordered inventoried and updated, which is untrue. So, we are down to this coin-flip choice: Which of the two leaders is more volatile and unsteady and likely to go off the ledge?

It has generally been assumed, as a matter of policy, that nuclear weapons are negotiating tools and not actual weapons to be used. There are nuclear treaties of all descriptions and degrees—de-escalation, arms agreements, non-proliferation, disposal, and alphabetized others, to minimize chances of destroying the only planet we have. There are only nine nations with nuclear capability and they have a total of 15,000 weapons.

The Obama Administration, for example, spent months, if not years, talking down Iran’s nuclear development program until it finally won an agreement. And America launched a foolish war and a total destabilization of the Middle East over a substance called “yellow cake” that didn’t exist.

But North Korea has generally been ignored, bought off, in some cases, with essentials such as fuel and food to warm and feed a starving nation while the southern half of the peninsula prospers. But all the while, other nations have been slipping North Korea the chemistry set to eventually assemble the rockets and the fissionable material to render the isolated nation and its unpredictable leader a nuclear threat.

Behind Jong-Un’s madness, it was thought, was his insistence on being treated as an equal at the table of world powers. Put another way, he wants to be taken seriously as an equal among equals. And now with his Dr. Strangelovian powers, the question is whether Jong-Un is still willing to negotiate an arms deal with a president who has yet to prove he’s the peerless dealmaker he claims.

With the support of the UN Security Council’s unanimous condemnation and punishing sanctions, Trump has enlisted Russia and China to apply even more pressure by withholding vital supplies from the isolated nation. Both nations have told North Korea to back off and be quiet. China has pledged neutrality if North Korea strikes first. But if American launches first, all hell might break loose.

There are 28,000 American troops bivouacked in South Korea, across the legendary 38th parallel, and another 7000 sitting in Guam, an American territory, which Jong-Un has threatened to blow to smithereens if Trump doesn’t calm down his rhetoric. Guan is a 14-minute missile ride from North Korea’s launch sites.

And caught in the crosshairs are Japan and nearby parts of China’s real estate, which is reluctant to risk collateral warfare. Hanging over it all is the threat of poisonous nuclear clouds drifting with the winds over the entire planet, defoliating everything in their path and mutating the human race as the fallout did in Hiroshima and Nagasaki. The clouds take years to dissipate.

But Pastor Jeffries, an evangelical, says that’s okay, the Bible says so. Jeffries, fundamentalist pastor of the First Baptist Megachurch in Dallas, TX, told The Washington Post: “When it comes to how we should deal with evil doers, the Bible, in the book of Romans, is very clear: God has endowed rulers full power to use whatever means necessary—including war—to stop evil. In the case of North Korea, God has given Trump authority to take out Kim Jong-Un.” That’s poor theology, but just the kind of uninformed reinforcement Trump encourages.

Jeffries, citing Romans 13, says government has the right to deal with evildoers. “That gives the government the authority to do whatever, whether its assassination, capital punishment or evil punishment to quell the actions of evildoers like Kim Jong-Un.” Jeffries considers himself an adviser to Trump. Jeffries was among the handful of evangelical preachers who laid hands on Trump during an oval office meeting in July.

So ordered and so ordained, Trump may have met the moment he’s been wishing for. It is an established but unwritten rule of politics that when internal problems beset a president, there is solace in seeking refuge in foreign affairs and travel abroad. Trump is bedeviled by a Congress that won’t do his bidding and undermined by a White House that’s in disarray and chaos. He’s surrounded by generals who can’t agree and won’t guarantee him certain battlefield victories because they know better. His poll approval numbers are smaller than his hat size. If Trump were a son in certain cultures he would be branded a disgrace.

Trump’s a man who claims to recognize opportunity when it does a paradiddle on his gilded door. Americans have a history of uniting behind their president in times of national crisis. They rallied around John F. Kennedy during the Cuban missile crisis. They cozied to Richard Nixon when he opened the door to China. They sympathized with (but rejected) Jimmy Carter when the American rescue helicopter crashed in the Iranian desert. They supported Bill Clinton when he intervened in the ethnic cleansing in Bosnia. And they even backed George W. Bush’s invasion of Iraq until the lies began to trickle out. But they were highly critical of President Obama for failing to act on the genocide in Syria.

Now is Trump’s one great chance to engage the American people seriously in foreign policy and, perchance, to distract them from the disaster of a president he’s been for the past six months. Blow this chance and the Russia investigation looms larger. Lyndon Johnson liked to say, “Come, let us reason.” Trump can put an end to taunting diplomacy by iPhone and do the same. Reason, if he can understand that, might get us to where we should be and end the infantile rants about scorching the earth into nuclear waste. But Trump dismisses history as a dustbin for losers. It takes courage to back down from a fight. But Trump’s ear once again rings with the voices of the people—his people. He’s telling them what they want to hear. And that is, let’s get ready to rumble.