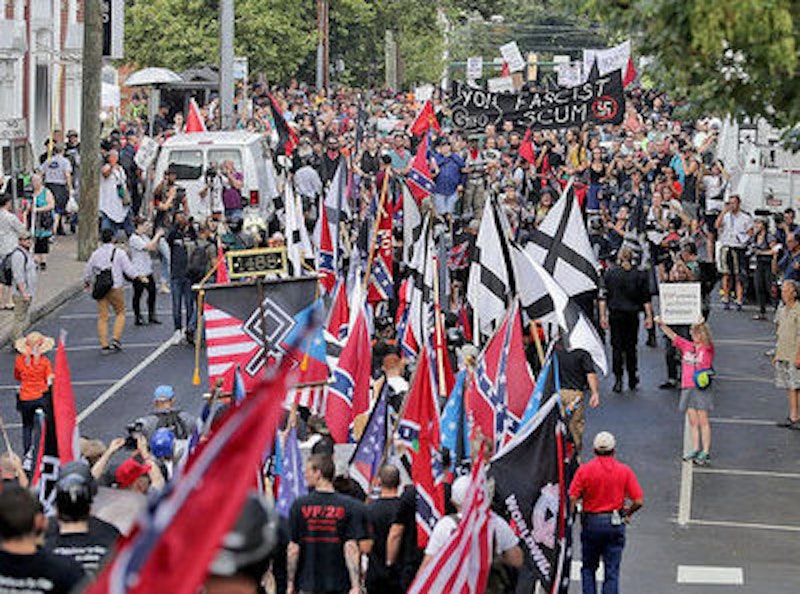 Watching cable news and reading op-ed pages, you get the feeling that there’s only one question at this historical moment: what will the President say? People didn't seem particularly worried about what the events in Charlottesville show about American culture or the shape of American history, what they show about all of us, or how we should react to them, if at all. They were worried only about how Donald Trump responded.

They spent all weekend—as though this were explanatory, or was itself the breaking story, or was the most important set of events—talking about what Trump didn't say, what he should’ve said, what he really meant, and so on. They went over his statements and tweets word by word for hours, and wrote scripts for him of what they would’ve liked him to say. Many blamed him for the whole set of events and hence the deaths and injuries.

At moments like this, as several thousand pundits have observed, you need leadership. At any rate, people who say things like that show that they themselves desperately need it. They are, obviously, obsessively concerned to find someone to tell themselves and you how to feel or what to say about any particular matter. It often absurdly narrows down to a cult of the presidency, and half of every news story, no matter how remote from the White House, is about how the president responded.

One thing about pundits on television: they really, really want to be led. They’re always looking around for someone to tell us what to do, how to feel, what to say. They think that's a necessary condition of a social life and a common culture, and the basic question isn't who we are or who they themselves are or what we think or what they themselves think, but what the president says.

I don't know whether the country cries out for leadership, really, but Cornell William Brooks or Van Jones or Thomas Roberts sure does, and events are only real or significant as they are represented by “the President of the United States,” who is supposed, cosmically, to be all of us together, or to have the power to shape reality with his words, who is the God that can redeem or destroy us.

Then again, they want to operate the leader like a sock puppet. They are outraged that he didn't use the term “white supremacy,” talking instead about racism, for example. Many people on television just dictated what he should’ve said aloud, which makes you wonder whether there's any real point in him saying it. The leader is imagined both as god and as slave. It's hard to grasp the psychology: I want someone to tell me what to believe; as they do, I want to dictate to them what to say.

That the conversation lurched onto this one topic and fixated there shows why there's really no hope for creatures like us. We don’t want to deal with race, with history, with one another or with ourselves; we just want someone to murmur reassuring words and make us feel inspired. Then, when things go wrong, we want someone to blame. Often these turn out to be the same person.

The leader is god and slave, but also scapegoat. We might think of Hitler, for example, who allegedly mesmerized the German people into participating in the holocaust with his super-human powers, and then retroactively took on an infinite responsibility for a situation that millions of people created together. Trump's tone, or his travel ban, “emboldens” actual white supremacists. If a leader tells us what to do, or somehow determines who we are, then each of us is not responsible for what we are all in fact doing together.

How you can look at events like those in Charlottesville and work it primarily as a story about how Trump reacted is beyond me; it's certainly no way for CNN or anyone else to cover an actual breaking news story. The obsession with Trump, whether he's the embodiment of American hope or the white nationalist destroyer, shows little but how desperate and incoherent we are, at once servile and imperious.

Instead of focusing obsessively on whom to follow and whom to blame, or finding someone to re-narrate us into a story of hope, we’re going to have to deal with our own racial and political polarization, which is lurching into violence. Donald Trump is just another chump, like Barack Obama or John Kennedy or Warren G. Harding. He can't save you or damn you, and the situation we are making together is the responsibility of each and all of us.