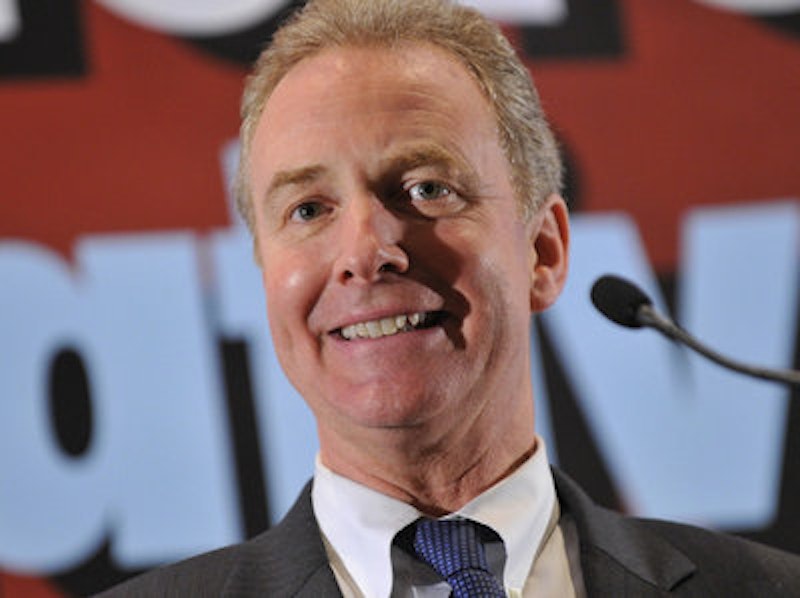 Rep. Chris Van Hollen’s been the national face and voice of Democratic fiscal policy in the House of Representatives for a half dozen years. Rep. Donna Edwards has limited herself mainly to Prince George’s County politics and community affairs. In what is advertised as among the most closely watched Senate races in the nation, Van Hollen and Edwards are dueling to replace Sen. Barbara Mikulski as U.S. Senator from Maryland.

The contest is critical for another reason: Democrats lost control of the Senate in 2014—and four years before that control of the House—and are hoping to regain at least a majority of the Senate in 2016. To do so, Democrats must recapture four Senate seats (five if Republicans win the White House) in addition to retaining the 44 seats they already hold and two independents who caucus with Democrats. There are 24 GOP seats up for election next year, with five incumbents considered endangered. They are: Sens. Patrick J. Toomey (PA); Mark Kirk (IL); Rob Portman (OH); Kelly Ayotte (NH); and Ron Johnson, WI).

Now that that the preliminary results are in, the divergent career paths in the House of Van Hollen and Edwards, two liberal Democrats, are beginning to reveal themselves as their campaigns intensify. A recent Baltimore Sun/University of Baltimore poll gave Van Hollen a 14-point edge over Edwards, and a two-one advantage in the Baltimore area boosted by a recent blizzard of TV ads. Their campaigns, too, have begun to resemble time-tested techniques of Maryland politics, relying heavily on endorsements as a public display of organizational strength and support more than the invisible politics of outreach by social media. They both appear to understand that primary elections are won by organization strength and an efficient delivery system to get out the vote on Election Day.

Most recently, Van Hollen pocketed a coveted endorsement by the SEIU (Service Employee International Union), which abandoned its previous support of Edwards in the battle between two suburban Washington candidates whose votes are crucial to government workers. Edwards’ loss is Van Hollen’s gain of thousands of dollars in campaign contributions and a network of about 40,000 members to do volunteer legwork in the immediate Washington suburban campaign area. The Teamsters in Baltimore and Washington have also endorsed Van Hollen, who represents most of Montgomery County which makes up the bulk of Maryland’s Eighth District.

Even as significant, Van Hollen has been endorsed by CASA of Maryland, the Hispanic advocacy group, which carries with it the imprimatur of the fastest growing population in Maryland as well as the nation and the potential of brigades of activist volunteers.

But, tit for tat, Edwards has received her share of campaign bounty as well. She picked up the endorsement of Emily’s List and its pledge to spend $1 million on advertising by the organization that supports Democratic women for elective office. And she also has the support of the Teamsters as well as the aerospace, machinists and electrical workers in Prince George’s County that, together with a patch of Anne Arundel County, makes up the Fourth District. Several members of the Congressional Black Caucus have endorsed Edwards, but many are withholding support until Rep. Elijah Cummings (D-7) decides whether to enter the race as time to organize a statewide campaign runs down.

Nonetheless, despite Emily’s List’s substantial pledge of money to Edwards campaign exclusively for television advertising and for no other purpose, the promise of $1 million is no match for Van Hollen’s cash on hand of $4 million. Edwards has had difficulty raising money while Van Hollen’s position on the Budget Committee affects every constituency and interest group and are likely to produce contributors.  Van Hollen’s cash provides more political flexibility than the promise of TV ads which could vanish if Edwards’ campaign begins to fade.

While each candidate represents a bulging populace and heavily Democratic adjoining counties, Van Hollen and Edwards have been competing for votes in the Baltimore area, especially in the city which is nine-one Democrat and in Baltimore County which in recent elections has been a decisive factor. Van Hollen’s investment in television appears to have paid off in poll numbers and support. Van Hollen is viewed as a giant-killer. In his first run for Congress in 2002 after 12 years in the Maryland House and Senate, Van Hollen defeated Mark Shriver, a member of the Kennedy clan and cousin of then Lt. Gov. Kathleen Kennedy Townsend, in the primary election. And by dint of a little help from Congressional redistricting that year, Van Hollen advanced to defeat Montgomery County’s revered and legendary congresswoman, Connie Morella.

The federal budget is Van Hollen’s calling card. Van Hollen found his mark on the House Budget Committee, where he eventually ascended to ranking Democrat and public debunker of its chairman, Rep. Paul Ryan (R-WI) (now House speaker) and the conservative fiscal policies Ryan advocates. Along with way, Speaker Nancy Pelosi (D-CA) designated Van Hollen as the special negotiator and spokesman for Democratic fiscal policy which gave him an almost daily presence on television during partisan budget debates. Van Hollen also served as chairman of the House Democratic Reelection Committee which raises funds and supports candidates for Congress.

Edwards took a different and more tortuous route. A single mother, she ran against her former boss, Rep. Albert Wynn, after the Fourth District was reconfigured as a minority district (76 percent black). In 2000, Wynn faced a nasty election in which his ex-wife served as campaign manager for his Republican opponent and appeared in a TV ad in which she stated that Wynn “left me for a white woman.” In 2006, Edwards ran against Wynn, the man she worked for in Annapolis when he was a delegate. Hers was a one-note campaign, Wynn’s vote as one of only four of 36 members of the Black Caucus to support the Iraq war. Two weeks before the primary The Washington Post endorsed Edwards. The endorsement was thought to have trimmed Wynn’s victory margin to only 2725 votes. In 2008, in her second attempt, Edwards defeated Wynn by two-one in the primary on a wave of heavy endorsements. Wynn then announced the he would leave Congress before his term ended to become a lobbyist and Edwards was elected in a special election in June to finish Wynn’s term. She was elected on her own in November. (In 2012, Edwards joined Republicans in a losing lawsuit claiming that redistricting had diluted the black population of her district.)

Edwards’ work in Congress has been mainly at the subcommittee level with no distinguishing assignments to give her the cachet and exposure that Van Hollen has achieved through his work on budgetary matters. Both Van Hollen and Edwards are lawyers. Van Hollen is the son of diplomats and has traveled widely. He is a graduate of Harvard and Georgetown Law and was a professional staff member of the Senate Foreign Relations Committee in addition to his 12 years in Annapolis and 12 years in Congress. Edwards has worked mainly in public advocacy and community affairs. She graduated from Wake Forest and the University of New Hampshire Law School. She was executive director of the National Network to End Domestic Violence. She also worked at Public Citizen and was executive director of the Center for New Democracy and also the ARCA Foundation.

While Van Hollen and Edwards have spent months skirmishing for the Democratic nomination, Republicans have only lately begun step forward to compete for the seat. They include: Chrys Kefalas, an openly gay former aide to Gov. Robert L. Ehrlich Jr., Del. Kathy Szeliga, minority whip of the Maryland House, Richard J. Douglas, a former Senate candidate and pentagon official and Anthony Deda, a Navy veteran. The last Republican to represent Maryland in the Senate was Charles McC. Mathias Jr., who Mikulski succeeded in 1987 upon Mathias’ retirement.