Neither Republicans nor Democrats can deal with Islamist terrorism. 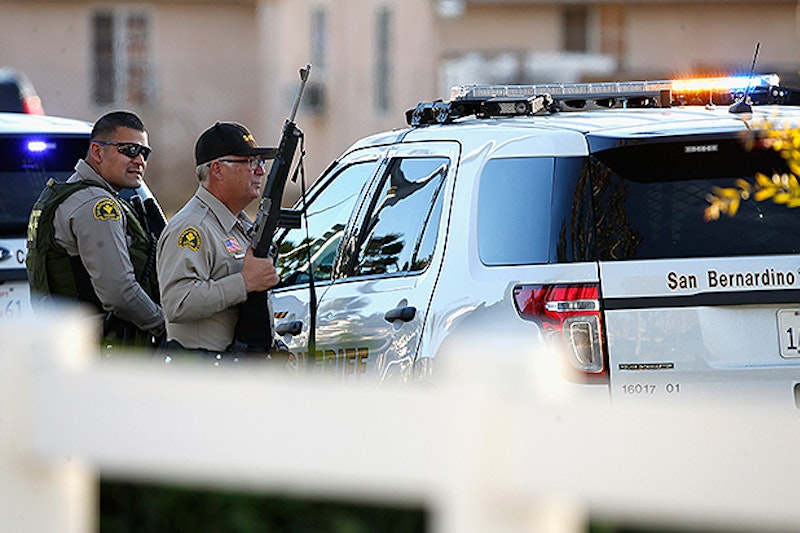 The mass shooting in San Bernardino on Wednesday was this nation's deadliest since the 2012 massacre at Sandy Hook Elementary School in Connecticut, when 20-year-old Adam Lanza fatally shot 26 people, 20 of them children. When Lanza—a psychopathic killer—mercifully killed himself, there was nobody waiting to step in and fill his shoes for the next big shoot-up. This time it's different.

In the immediate aftermath of the California bloodbath, things played out politically as they always do. That is, the Democrats called for stricter gun control (two .223-caliber assault rifles were used in the attack) and Republicans sent their thoughts and prayers. This scenario is now as predictable as Columbia University losing a football game on Saturday, and you'll see it as a repeating loop at all the mass shootings that are in store for the U.S. in 2016.

Democrats would be better off not railing against those offering "thoughts and prayers," as this phrase is the standard, pro forma offering of condolences these days, at least among people of faith, or those pretending to have it. Criticizing "thoughts and prayers" accomplishes nothing, and opens the door for right-wingers to accuse the left of "prayer shaming," which fits in with the current conservative narrative that Christians are a persecuted group.

Neither Republicans nor Democrats have been able to coherently respond to this latest slaughter, however, as both are crippled by their respective biases and political realities. The GOP blundered almost immediately when, the day after the shootings, every Senate Republican except Mark Kirk of Illinois voted down a proposed law to deny people on the FBI's consolidated terrorist watchlist the right to buy guns or explosives. After the next Islamist-inspired attack, however, sticking to this position will be risky, no matter what parts of the Constitution are invoked. The rights of suspected terrorists aren't vigorously defended in such a political climate.

The Democrats also look weak now, unable to come to grips with the reality that the U.S is facing a serious Islamist terror threat. Listening to NPR's Diane Rehm show, which was devoted to the San Bernardino incident on the day after the killings, I was shocked that the topic of terrorism of any kind was not even broached. The fact that the attack didn't "make sense" was discussed, due to how prepared Syed Farook and his wife—the perpetrators—were when they returned to the workplace, with their masks and bulletproof vests. One of Rehm's guests pointed out that the crime was very "unusual" because Farook had a solid job, a wife, and a baby, but he didn't elaborate. The word "terrorism" was not mentioned once during the broadcast.

Listening to the podcast, I concluded that Rehm had explicitly instructed her guests not to mention terrorism. The only issue they discussed relating to the murders was gun control. This, in spite of the fact that it was known that Farook had recently traveled to Saudi Arabia and Pakistan, that he’d planted pipe bombs in his workplace, and that this attack had obviously been well-planned. Rehm tipped her hand on her next show, saying, "I think we're splitting hairs here when we call a killing by a white man slaughtering children simply a problem of mental illness and we call what happened yesterday terrorism." Stunningly, the liberal icon (whose recent exchange with Bernie Sanders has opened her up to charges of anti-Semitism) has demonstrated, with one statement, she does not understand the concept of terrorism as being defined by a political motivation, like many of her liberal fans.

Liberals like Rehm have their blinders on when it comes to Islamist terrorism. The New York Times on Thursday: "Investigators now believe that what initially seemed a workplace shooting in San Bernardino, Calif., was a well-planned attack by a married couple with at least some contact with Islamic extremists." Has anyone ever seen a mere workplace shooting with this level of preparation behind it? This was possibly a hybrid workplace/terrorist attack, but regular workplace shooters do not bring their wives along in a mask and bulletproof vest, and the wife doesn't shoot an illegally modified .223 caliber Smith & Wesson M&P assault rifle out of the back of an SUV at police.

The worst take from the left I've seen came from The New Yorker's Adam Gopnik, in an article ridiculously headlined "Our Shared Blame For The San Bernardino Shooting." Gopnik rambles on aimlessly for about 1200 words, but his intended point is encapsulated in this nonsensical sentence: "The collective responsibility that all Americans share is the responsibility of allowing too many people to have too many guns." Sorry, but that weight falls squarely on the shoulders of the Republican Party that, cowed by the NRA, successfully fights every single attempt to control firearms. Gopnik mentions Syed Farook once, assigning no blame to him or his wife, or any terrorist group.

Articles like Gopnik's tell the reader nothing, but The New Yorker felt compelled to weigh in on the event to appear relevant. He neglects to even mention Islamist terrorism, blames everyone for the U.S. not having better gun laws, and offers no solutions. The media’s reported that the Farooks had been in touch with Islamist extremists on social media. Little by little, the authorities will be able to put the pieces together and understand how Syed Farook became radicalized (probably through his wife) and ended up with an arsenal deadly enough to kill hundreds in his apartment. Any efforts to limit such events in the future must start with sensible gun legislation (not confiscation) and closer scrutiny of radicalized American citizens such as Syed Farook. Unfortunately, the former is off the table at the moment, and the latter is no simple task.