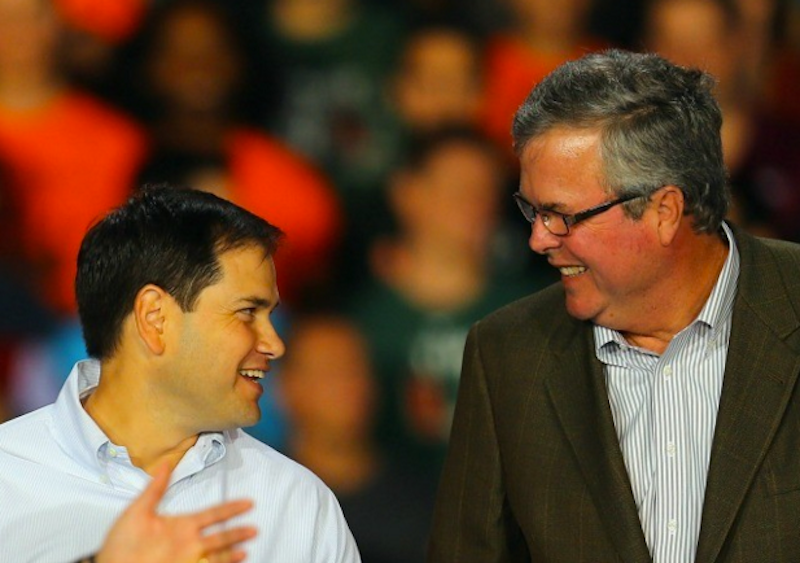 BuzzFeed has a big article online: "Whisper Campaigns and 'Zipper Problems': How Jeb Bush’s Allies Tried—and Failed—to Stop Marco Rubio." The article presents little evidence of such a campaign; next to none, really. Instead it demonstrates that Rubio's people will say very bad things about Jeb Bush if you keep their names secret. Not a single Rubio aide or operative is named anywhere in the excerpt. (The piece is taken from Coppins' new book on what the Republicans are doing pre-2016.) We hear from "the senator’s camp" and "many in Rubio's orbit" and "most in the Rubio camp." Even the harmless stuff is blind: "Rubio’s operatives found these stories impossible to reconcile with the devoted family man and conscientious careerist they knew and admired." Nobody wants their names in the same text as the Jeb stuff. Unless you're talking about whistle-blowers or Mafia informers, that's not a sign of people who know what they're saying is true.

That's fine by Coppins. He doesn't even say why the names are kept back. Maybe he thinks readers are as cooperative as he is. Here he is on how the Rubio team knows that Jeb's people have been talking smut: "Eventually, word got back to the senator’s camp that Jeb’s close allies in Florida were working to revive the 'zipper problem' meme." That's the proof, all of it. The Rubio team says they heard stuff. If you use this standard, you can say that we know Rubio had affairs. After all, word got back to a lot of people about that stuff.We do know, no thanks to Coppins, that Jeb's team is spreading something about Rubio. There was that leaked memo for the donors ("Those who have looked into Marco's background in the past have been concerned with what they have found"). But the only scandals the memo got into were financial. Coppins and the Rubio team say Bush is dealing in nastier stuff than that, and they finger two Bush loyalists by name. There's a trail of ironclad proof, by which I mean this vapory sentence: "They now regularly heard about her dissing Rubio to the important power brokers and politicos who filtered in and out of her boyfriend’s hotel, and at least one of the senator’s advisers was convinced that she was fanning the infidelity rumors." That's it. They heard something, or say they heard something.

That's for one of the alleged smut spreaders. The other woman (I won't give either name) gets even less. Rubio's team just kind of figures she did it. She got fired from his Senate campaign, so she's bitter. On the other hand, we're supposed to think the first woman—the one they regularly heard about—must be guilty because she gets Rubio's people so worked up, so steaming. In short, so bitter. "They resented how she had allowed reporters to quote her as a 'confidante' or 'adviser' to Rubio for years, only to bolt to Jeb the second he decided to run for president," we are told.

That would be a motive to lie about her, but Coppins can't process it that way. His reporting is pure Method. Not only does he hand out anonymity, he channels point of view. He's pretty damn sure about everything that the Rubio team is pretty damn sure about. For example, that somebody they don't like must be doing bad things because they don't like her. “That woman couldn’t say nice things about her mother,” says "one of the senator's advisers."

Up at the top I weaseled. Here's why I couldn't say straight out that the article provided no proof. Coppins talks to Joe Scarborough, who says that some of Jeb's people told him they had Rubio dirt. Like, zipper dirt? Sex rumors, as alleged in the piece's headline and throughout the article? Maybe. Here's what Scarborough said: “Everybody who runs against him says he has girlfriends, or financial problems. They throw a lot of shit at the wall. It's the same thing from the Jeb Bush camp. They keep telling me, ‘Oh, we’ve got the thing that’s going to take him down.’ But nobody’s ever produced anything that we all haven’t read in the Tallahassee Democrat.”

Notice that Scarborough says Jeb's people told him Rubio stuff, but he doesn't say it was sex stuff. Girlfriends or financial problems. McKay Coppins says Jeb's people are spreading sex allegations. Scarborough doesn't quite back that up, and this is the only—I repeat, only—piece of evidence in a long article full of anonymous assertion. The key fact the article really establishes is that Rubio's people are willing to spread sex talk about Jeb. "After all, Jeb had faced his own rumors of adultery in his day," Coppins writes, giving the view of "many in Rubio’s orbit." There follows a paragraph of references to "unsubstantiated Jeb rumors swirling around Tallahassee." This technique is the same that Scarborough mentioned, with people bringing up old press coverage of rumors. Coppins is letting Rubio's people do it right in front of us.

They also play the race card: "Some of Rubio’s advisers came to believe that racial stereotypes were part of what made the speculation so persistent." They even throw Rubio's mother and father under the bus. The Washington Post didn't catch the senator in a lie about his parents fleeing Castro, or so we're told, because "the truth was that the paper’s findings had genuinely surprised him: He had never heard the full story from his mom and dad." Oh, "the truth." Nice to have that nailed down.

Very few people could make me doubt that a Bush ordered vicious personal rumors to be spread against a rival. But McKay Coppins has done it.