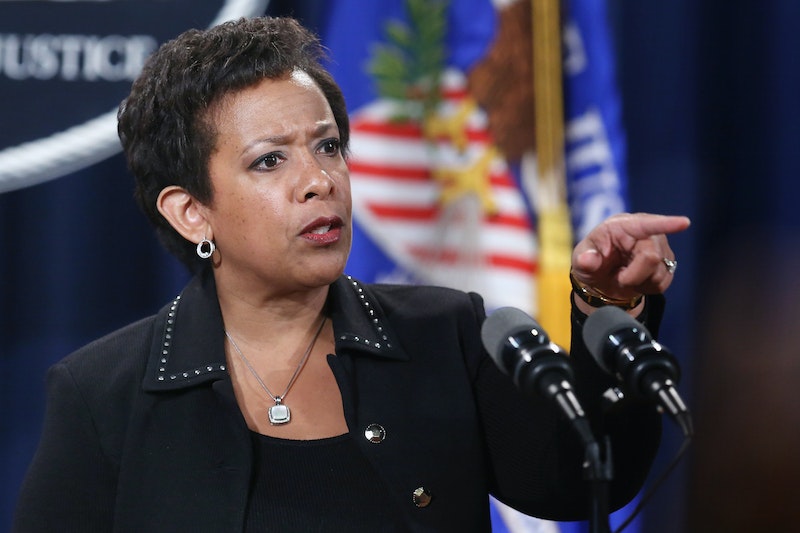 On September 12, 2001, the George W. Bush administration began thinking about how it could make America safer, and the plan it eventually came up with involved depriving citizens of numerous liberties. Bush's spokesman, Ari Fleischer, infamously said, "Americans need to watch what they say, watch what they do." While Fleischer's comment, in context, is rather benign, he took a lot of heat at the time. Before making it, he'd been asked to address what a dumb Republican congressman from Louisiana named John Cooksey had said: "If I see someone come in and he's got a diaper on his head and a fan belt around that diaper on his head, that guy needs to be pulled over and checked."

While it was widely interpreted in some circles that Fleischer was referring only to Bill Maher's assertion that the 9/11 terrorists were "brave," he could’ve been referring to Cooksey's buffoonish statement as well, which would’ve made his message much less chilling than people like Dana Milbank of The Washington Post portrayed it. I no longer believe Fleischer meant anything sinister.

The current U.S. attorney general, Loretta Lynch, is poised to become the new Fleischer in the American imagination—at least on the political right—but this time what she is said is clear, and hasn't been taken out of context. And it is sinister. After the attack in San Bernardino, she vowed to prosecute anyone guilty of what she described as violence-inspiring speech. Liberals were dyspeptic after Fleischer's probably innocuous comments, but they haven’t reacted similarly to Lynch's, of course, because they came from a Democrat.

The Bush administration made no attempt to prosecute John Cooksey for his offensive statement, but what would Lynch do about someone talking like the Louisiana politician? It's not a stretch to imagine her labeling similar words "hate speech" as a prelude to prosecution. The key test of whether you really believe in free speech is if you’d defend someone whose remarks you find abhorrent, a test many Americans on left fail miserably.

Soon after 9/11, Bush secretly authorized the National Security Agency to eavesdrop on Americans and others inside the United States without court-approved warrants, and he didn't stop there. You'd have to go back to The Sedition Act of Woodrow Wilson's administration to find wartime limitations on civil liberties comparable to those of the Patriot Act. President Obama, running for office, promised major changes in reversing Bush's poor civil liberties record, but he’s done nothing of the sort. On the contrary, he’s expanded the security state, even claiming the right to execute American citizens abroad with drones. Liberals would’ve been outraged had Bush done that, but many give Obama a free pass because he's a Democrat.

It now appears, with Lynch in as attorney general, Obama will expand his poor civil liberties record. How will Lynch determine what can and cannot legally be said about Muslims now? She's in dangerous territory: take a look at the UK, where a school employee of 20 years was recently fired for "liking" a Facebook joke about a burqa. Nita O’Dell lost her job at Billesley Primary School in Birmingham, England because she was amused by a photo that showed a dog wearing wearing something resembling a burqa, with the caption: “Guide dog for a Muslim woman. It’s called a Barka.” She hit the "like" button, some zealot reported her, and now she has no job. Nor does her husband, who’s too ill with diabetes to work.

Normally intelligent people become very confused when addressing religion. They say all religions should be respected, but they’re wrong. "Tolerate" is a better word. Scientology is a religion, but I don't respect it. Catholicism is one too, and I don't respect it either. Religions pretend to have all the answers, and presume the authority to instruct people how to think, dress and behave. For such pomposity, they deserve to be mocked. The same goes for the burqa, which is demeaning. Buying a candy bar from a woman in a burqa in Binghamton, New York a few years ago was one of the more chilling experiences of my life. One eye-slit was all of herself that she was allowed to expose to the world, but I'm supposed to respect this? But if you like a joke about the burqa, the thought police in the UK will hurt you badly and pat themselves on the back afterwards.

This is the path Loretta Lynch puts the U.S on with her threats of prosecution. For all the criticism George Bush took, the path he took was far superior to Obama’s. He regularly reminded Americans not to take out their anger over 9/11 on innocent Muslims, and often included Muslim leaders in White House events. This was a positive accomplishment that many hard-liners in the GOP disliked, but Bush, to his credit, ignored them.

I enjoy criticizing political parties and politicians, Dallas Cowboys fans, residents of Florida, and even religions, which are not in a separate, inviolable category. I especially enjoy criticizing people or institutions that tell me, or others, what to do. Even though I voted for him twice, I'm glad Obama will be leaving office soon, taking Lynch with him. We can't do much worse when it comes to civil liberties.