“Respectable” people think they're equally bad, but they're wrong. 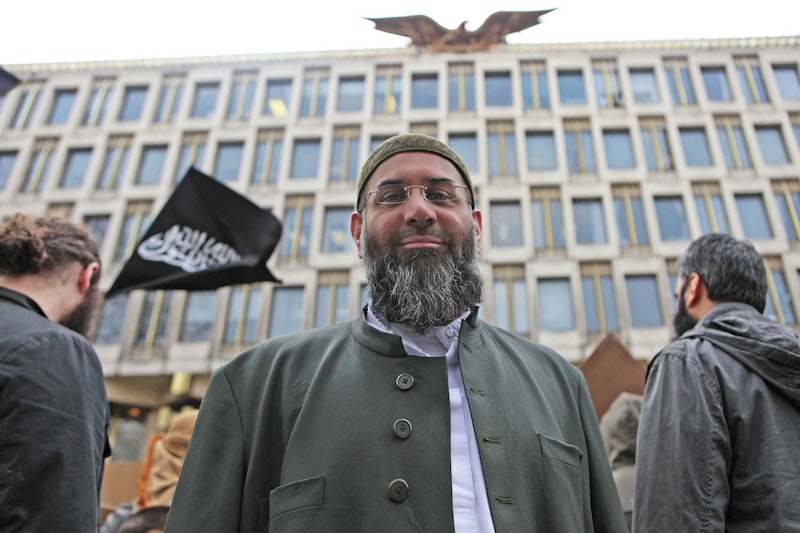 On a BBC television show called Free Speech, a Caucasian man in the audience who said he was representing an “Islamic diversity center” said he thought British anti-Islamist activist Tommy Robinson (who was sitting nearby) and jihadist Imam, Anjem Choudary, should be murdered with anthrax. The host accepted it, and the audience cheered. The message is that Robinson and Choudary are equally immoral. An analysis of this assumption, which many accept, reveals just how divorced from reality the current debate in the U.K. over Islamism has become.

Wikipedia describes Choudary, a hate preacher and active ISIS supporter, as “a British Muslim social and political activist. He served as the chairman of the Society of Muslim Lawyers until it was proscribed.” U.K. citizens don't have the First Amendment protection Americans enjoy. The government just bans groups it perceives as hate groups, which it calls “proscribing.” Choudary went on to form several similar groups, such as al Ghurabaa (“the believers”), Islam4UK, and al-Muhajiroun (“those who migrated in the cause of Allah”), all of which were banned too.

Choudary isn’t banned from television however, which is a good thing, as it's important that people are exposed to his vicious extremism. Commenting on BBC television on the 2013 murder of Lee Rigby, the British soldier who jihadist and Choudary disciple Michael Adebolajo tried to behead, the self-proclaimed “Sharia scholar” refused to say he was “horrified” by it, preferring to shift the conversation to the “right” things the murderer said, with the bloody meat cleaver still in his hand, about British foreign policy.

Choudary has spoken publicly about the U.K. populace “living like animals,” and he's said that U.S. Army officer Nidal Hasan, who murdered 13 fellow soldiers in the 2009 Fort Hood massacre, was carrying out his “responsibility.” The radical cleric is currently up on charges of recruiting online for a proscribed organization—ISIS. It's reported that he receives £25,000 annually in government benefits. Indeed, he once told a group of fellow fanatics that it's “the normal situation for you to take money from the kuffar,” referring to government benefits as “jihad seeker's allowance.”

It's important to note that jihadist Choudary is not representative of the British Muslim population, most of whom are horrified by his apocalyptic, binary Muslim/non-Muslim vision. These are the Muslims who want only to live in peace with their fellow U.K. citizens, while practicing their religion. Their version of Islam is not Choudary’s seventh-century approach to Islam of taking the canonical scriptures literally. They are content living under British law, and don't wish to replace the current government and enforce Sharia law. Choudary’s disdain for non-Muslims and chilling rhetoric makes them look bad, because they're often falsely associated with him, and feel uncomfortable.

The harsh reality is that there are still enough Islamists in the U.K. to cause serious societal problems, but in an atmosphere where anyone who dares suggest that some fundamental issues within Islam need to be addressed is called a racist, only people like Tommy Robinson, who’s strong enough to handle it, will speak out. The stifling of free expression leads to events like the Rotherham, England child sex abuse scandal, where it was discovered that 1,400 girls had been sexually abused over 16 years by Muslim men of Pakistani origins, but authorities concerned with “community cohesion” and afraid of being called racists covered it up. The grand multicultural experiment must have a more positive narrative. “Cultural sensitivity” trumped protecting girls as young as 12 who were abused in stomach-turning ways, pimped out on the streets of northern cities to depraved perverts.

Tommy Robinson’s cousin was an underage drug addict who fell victim to such horrors as well. He's from the rough town of Luton, and has been forced to experience a reality the cultural elites are sheltered from, such as physical attacks by Muslims, as documented on YouTube. Search for “Anjem Choudary beaten up” on YouTube, however, and nothing comes up.

Still, much of respectable British society regards both Tommy Robinson and Anjem Choudary as pariahs. They're just two different sides of a bad coin. There's evidence that plenty more Rotherham-style abuse has taken place in other cities, but I see much more focus on criticizing Robinson than concern for the underage victims and outrage that cowardly public servants systematically suppressed their abuse to further their own careers.

Robinson is merely the symptom of a large societal problem that he's been forced to deal with because nobody else will. He has to exist, because too many others have looked away. Both Robinson and Choudary are often brutally honest in that they don't hold back, but only Choudary is a brutal person. Robinson’s also shown the ability to evolve, but Choudary never will. It's a symptom of a deep-seated malaise when educated people use a false equivalence in comparing these two polarizing figures, because one of them wants to destroy the nation and subjugate non-Muslims, while the other is trying to make sure this can't happen.

France was horrifically attacked once again by people Anjem Choudary and his fellow British jihadists openly admire and assist. Can anyone doubt that he'd be happy to see the U.K. getting pummeled by Islamist terrorists as France has been since the Charlie Hebdo murders? If Choudary ends up in prison, that's a good thing, but the U.K. has been lucky so far to escape France’s fate.