Mike Pence Will Say Anything

And that’s why Mr. Trump picked him. 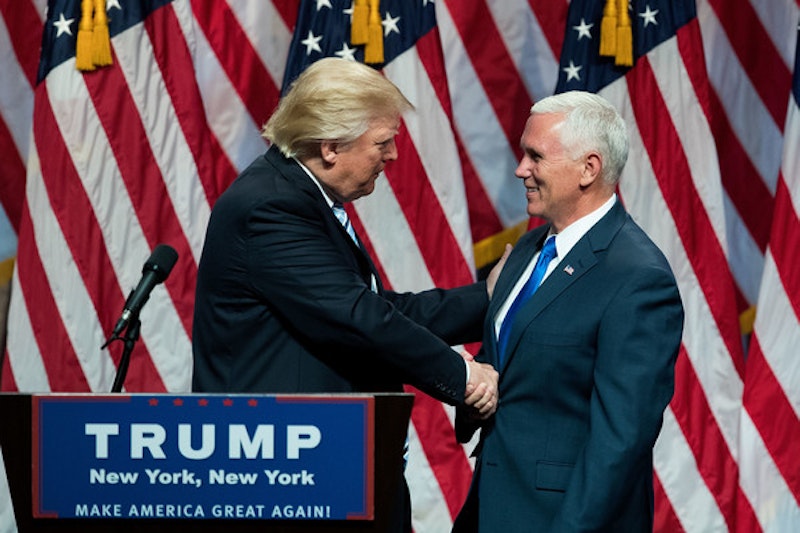 “Not only do I not recall this topic being discussed,” says Michael D. Cohen, “it does not even sound like something Mr. Trump would ever say.” That’s my favorite quote from the press stories about Mike Pence’s selection for running mate to Donald Trump. Pence is governor of Indiana, and his predecessor had attracted a certain notoriety because the fellow once lost his wife to another man and then accepted her back. Musing on this, Trump announced to Pence that he, Trump, could never do such a thing.

Or so The New York Times would have us believe. Cohen, a lawyer for Trump, says no and says it beautifully. A few months back Cohen told The Daily Beast (incorrectly) that the law doesn’t mind if men force their wives to have sex with them; this was in connection with his client’s first marriage.

Trump needs people who can look at a dog turd and say that dogs don’t exist, neither does shit, and sidewalks are still unproven. Cohen is the ideal of that type, but Gov. Pence is in there pitching. The facts can put him under whatever pressure they like; he will defy that pressure. For instance, the facts may insist that Pence is endorsing a particular candidate, but Pence will come very close to not speaking that way. Trump marveled at this ability when introducing his choice for vice president on Friday. He looked back on Pence’s decision to endorse Ted Cruz. “Governor Pence, under enormous pressure from establishment people, endorsed somebody else, but it was more of an endorsement for me, if you remember,” he said. “He talked about Trump, Ted, then back to Trump. I said, ‘Who did he endorse?’ So even though he was under pressure, because I’m so, you know, outside the establishment, it was the single greatest non-endorsement I’ve ever had in my life, okay?”

Pence’s most famous moment on the national stage was like that too. He had to tell George Stephanopoulos if it was legal or illegal for an Indiana florist to refuse the business of somebody planning a gay wedding. By one count, Stephanopoulos asked six times in 11 minutes and 36 seconds. No good: Pence acted like the question was whether or not people from Indiana are nice. Pence’s most famous moment on the international stage was a visit to Baghdad with John McCain. Pence said a market they toured was just like any open-air market in Indiana in the summertime.” His remark attracted notice when The New York Times revealed that the visitors had been protected by U.S. snipers, attack helicopters and armored Humvees.

Now his job is to make remarks of this sort for Trump, to use his sober dignity and defiance of facts to mop up Trump’s public blats. Normally a running mate attacks people, and Pence seems willing to do so. At breakfast in the governor’s residence, he gave Trump an earful about the awfulness of the Clintons, and he had done the same for the crowd the two men addressed the day before. But Pence’s rhetorical go-to moves come down to somberly deploring and stolidly avoiding. At any rate he doesn’t raise his voice, and he’s spent a couple of decades letting people know he’s against negative campaigning. “He’s almost like a white Ben Carson… which is excellent,” says a giddy Indiana voter. Even if Pence has stopped being against negative campaigning, he still hasn’t had much practice at it.

Trump, of course, is another story. “That’s the part that Mr. Trump seemed to relish,” says Kellyanne Conway, a pollster who’s done work for both Pence and Trump. She feels that Trump doesn’t need an attack dog, and apparently the big guy listens to her. According to Politico, Conway’s the person who first alerted Trump to the possibility of Pence as running mate. She also pitched him to Paul Manafort, the political operative who is (more or less) in charge of Trump’s campaign.

Manafort became Pence’s top booster, and Trump finally said yes, so possibly Conway chose the right angle for selling her man. Politico tells us Conway directed Trump’s attention to this quote by the governor: “Every American is entitled to a fair trial and an impartial judge, but of course I think those comments were inappropriate. I don’t think it’s ever appropriate to question the partiality of the judge based on their ethnic background.” Most of that statement condemned Trump, since he had said a Mexican-American judge, just by being Mexican-American, had to be biased against him. But notice the statement’s lead-in. Conway liked it because Pence staked out the idea that Trump’s rights were being infringed. Pence didn’t say they were, exactly, but he sounded as if they were. Apparently Conway and Trump found this a slick maneuver. There the Governor was, publicly fretting about discrimination, but he edged in the thought that, really, the judge was doing his job wrong.

Neat work. Now Trump has his man, a fellow who’s ready to talk like a sorrowful member of the clergy when explaining that a red light was really green. Normally this isn’t the top skill for a vice presidential candidate, but Trump has a special need for associates who can deny obvious truths. If you don’t think so, ask Michael Cohen. He’ll say I’m lying.