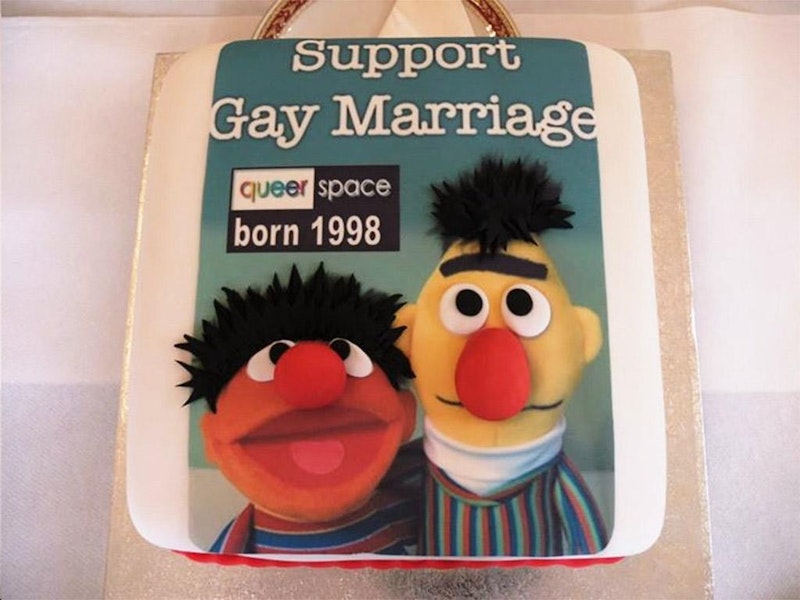 In 2014, gay activist Gareth Lee of QueerSpace asked Belfast-based Ashers Baking Co., a Christian-run business, to make him a cake decorated with images of Sesame Street’s Bert and Ernie, with the slogan “support gay marriage.” Ashers informed him that their religious beliefs prevented them from fulfilling the order. Another bakery, happy to get the business, decided to bake the cake.

Lee, who’d obviously expected this outcome, claimed the episode left him feeling like a “lesser person.” He filed a civil suit against Ashers, backed by the publicly-funded Equality Commission, and Ashers was found guilty in May of last year of violating the sexual orientation and political discrimination law and fined £500. Ashers filed an appeal that the Court of Appeal in Belfast rejected last week.

This decision’s been hailed by some as a victory for equality and LGBT rights, while criticized harshly by defenders of freedom of religion and free speech rights. Ashers should’ve been more forthcoming about what sort of cakes were off-limits, and whether or not Jesus ever opposed homosexuality is open to debate, but there's no logic that can be applied to what people believe. People tend to follow the lead of their religious leaders, and many of them oppose gay marriage, and homosexuality in general.

So what sort of discrimination is Ashers really guilty of when they decline to make a statement their church leadership tells them is sinful? Ashers is discriminating against a political idea, not a minority group. People who make no secret about being gay can walk into their store and expect service just like anyone else. Gareth Lee claimed the bakery’s actions made him feel small, but how much responsibility does a private business have for an individual's self-esteem when it comes at the expense of sacrificing the beliefs they ostensibly have the right to practice in a free society?

It's difficult to make sense of the U.K.’s political environment without coming to the conclusion that PC double standards have become the norm. In June, London’s Muslim mayor, Sadiq Khan, banned an advertisement featuring a fit woman in a bikini because “as the father of two teenage girls,” as he put it, he deemed it “body shaming.”

In the city of Birmingham, which has a high Muslim population opposed to displays of the female body, many of these ads were spray-painted over, so there's a question about what the true intention behind Khan’s ban really were. It's not as if an advertisement featuring a bikini is a terrible new trend that must be nipped in the bud. Choosing to weigh in on the beach burkini ban in terrorism-torn France, a controversy that gained much media attention after activists intervened, Mayor Khan lectured the French, saying, “Don't tell people what to wear.”

Dr. Michael Wardlow, Chief Commissioner of the Equality Commission for Northern Ireland, said Christians must recognize they’re not “the only people who hold strong values” and cannot expect special “exceptions” from discrimination law. Is the expectation of gay persons that all Christian bakers will violate their religious beliefs to make a cake promoting gay marriage a “strong value”?

Wardlow specified Christianity, not religions in general, perhaps because he knows that no Muslim baker in the U.K. is ever going to be forced to make a cake with pro-gay messages or images of Mohammed on it, because Muslims are classified along with gays as “victims” in U.K. society and treated as a special class. Wardlow must be aware of the religious exception to the law offered to Muslims in the U.K. who choose to wear a face-covering niqab into a bank, while wearing a ski mask or balaclava is not allowed for security reasons.

Just about every bakery in the U.K. would be happy to charge Gareth Lee for making his cake. Is it really worth it to make sure the few who believe they can't do this in good conscience get punished? The LGBT community and progressives celebrating this court ruling as a win for equality may soon find out they have a pyrrhic victory on their hands, at least if the law is applied equally, which admittedly is far from guaranteed.

By the precedent set by the Ashers case, Muslim bakers would be legally obliged to bake cakes celebrating topics considered “haram.” For example, they could be fined for declining to put an image of a dog on a cake, even though many Muslims believe dogs are “dirty” animals. Fining Christians for declining to participate in a celebration of gay marriage will not change their behavior, as they’ll choose to pay up. This makes the law purely punitive, and discriminatory. That's the price you pay for not being a protected class. Gareth Lee, if he's serious and fair about his mission, should now ask a Muslim-run bakery to make a cake celebrating gay marriage. I doubt he will.