Organization claiming to fight “intolerance” has lost its way. 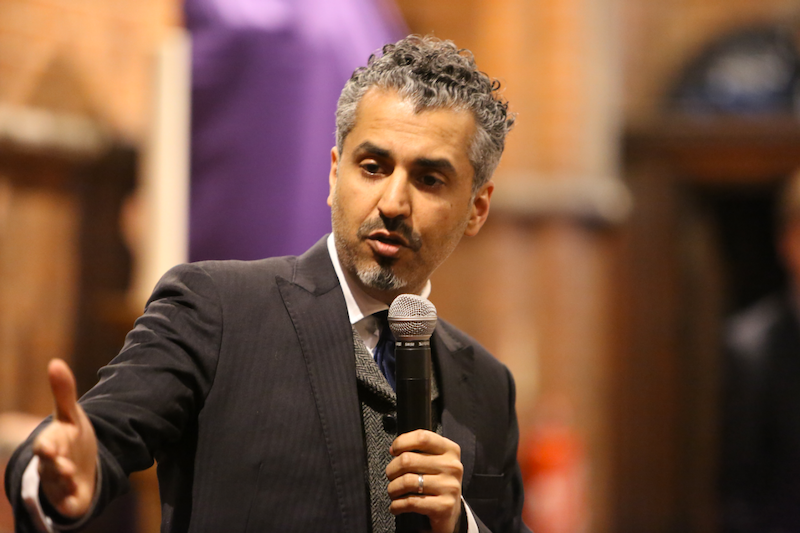 The Southern Poverty Law Center (SPLC), located in Montgomery, Alabama, owns the franchise on identifying the world’s evil. When the media reports that an organization has been designated a “hate group” by the SPLC, it’s then carved in stone. They curate the definitive hate group list for which they make all the rules. That this organization sometimes abuses that power should come as no surprise, even if’s staked out the moral high ground as a noble combatant against hate, intolerance, and discrimination.

In a move sure to be welcomed by the regressive left and established Islamic interest groups, the SPLC has just placed one of the world's most prominent Islam reformers, Maajid Nawaz, on its list of “anti-Muslim” extremists. Now that he’s blacklisted, his critics need only point to this fact in lieu of offering counter-arguments to his well-thought-out critiques of Islam, a gift to regressive leftists, who prefer censorious name-calling to actual discussion.

Muslims like Nawaz are feared more than anyone by the Islamic establishment. Unlike the many Islam apologists on the left, they actually know what they're talking about when discussing Islam, so they're dangerous. As their arguments cannot be countered by dismissing them as ignorant—by claiming, for example, that they haven't read the Qur'an or the hadiths—the strategy has pivoted to discrediting their characters. The SPLC has decided to play along with this dirty game.

Former Muslim and brash critic of the religion, Ayaan Hirsi Ali, who was placed on the blacklist along with Nawaz, has been so outspoken that her life’s been in danger for years. That the SPLC has chosen to stigmatize her is no great shock, but to identify a practicing Muslim as an enemy of Muslims is another matter. Nawaz now feels that the SPLC has also put his life in danger by blacklisting him. He knows what can happen when you tell the wrong kind of Muslims that someone else is “the wrong kind of Muslim.” Ku Klux Klan members firebombed the SPLC’s office in July 1983, so the non-profit organization that claims to fight intolerance ought to be familiar with what the “wrong people” are capable of if given any encouragement.

The SPLC’s blacklist is contained in the SPLC’s Field Guide to Anti-Muslim Extremists, a one-step reference allowing readers to quickly identify all the real Muslim haters in the world. Few will actually take the extra step of learning exactly why Nawaz has been called out, but the reasons listed in the Field Guide are appalling.

One thing that supposedly makes Maajid Nawaz anti-Muslim is his advocacy for “criminalizing” the wearing of the niqab, which covers the entire face, in public places such as banks, courthouses, schools, and airports. Nawaz wants the niqab banned in just these places for security reasons, just as facial masks and motorcycle helmets are. In his op-ed on the topic, he listed a number of instances when terrorists attempted to escape detection by wearing the veil, and he sees no reason only Muslims should be given a pass on matters of public safety. He never once mentions “criminalizing” anything. Outside of a handful of identity-sensitive locations, Nawaz calls for no legal restrictions on the niqab in public. Conversant with Islamic theology, he points out that even under the ultra-conservative, medieval interpretation of modesty requirements for women, the niqab is only required outdoors.

The SPLC Field Guide also points out that Nawaz tweeted an image of Mohammed, which “many Muslims” see as blasphemous. Many Muslims also don't see it as blasphemous (such as most Shiites), not to mention that blasphemy laws are now seen as antithetical to liberal Western principles. A Muslim tweeting an image of Mohammed is of no consequence, and a non-Muslim should be free to do it as well.

Finally, the SPLC Field Guide cites the Daily Mail’s report that Nawaz tried to touch a naked lap-dancer in a strip club last year. This is ridiculously offered as evidence that he's not the “religious Muslim” he claims to be, as if, even if this incident were true, it would justify his stigma as an “anti-Muslim extremist.”

The Southern Poverty Law Center has lost its way since the days it successfully battled white supremacists. Now it's a bunch of “progressives” in Alabama proclaiming that a Muslim man in the UK who’s publicly argued that Islam is a religion of peace should be known as a an anti-Muslim extremist. That's irresponsible. All of Nawaz’s arguments involve “Islam” as an ideology, not individual Muslims, but the SPLC can't even get this crucial distinction right.