While Bill Clinton would elbow his way into the act. 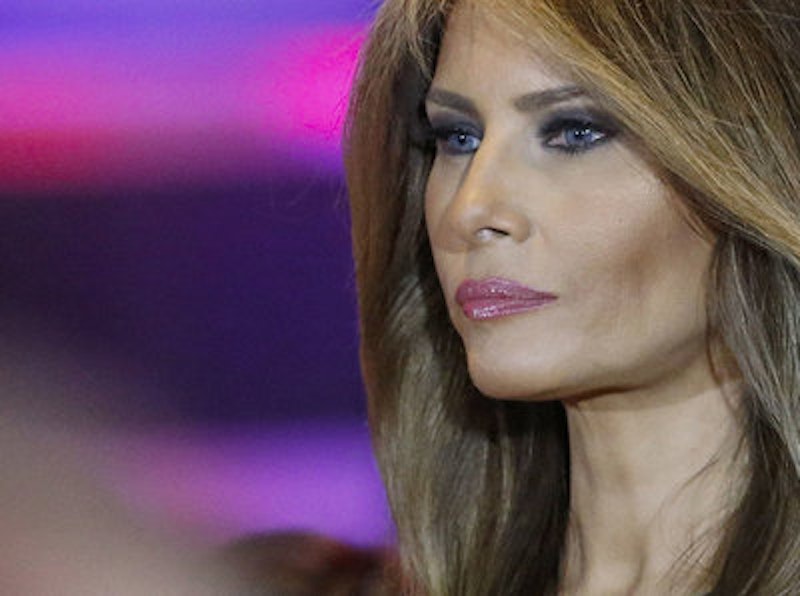 America’s headed for a major spouse problem. We know what to expect if Melania Trump assumes the role of First Lady. But what to do about Bill Clinton if Hillary wins. He is, after all, a man with a lifetime title of his own as well as a busybody who can’t resist meddling in politics or policy. Melania delivered one major speech and gave one interview, both of which received terrible reviews, until they dusted her off and sent her out on the final weekend of this endless campaign to validate her husband’s candidacy among suburban women. Bill Clinton won’t shut up, and he’s fumbled a few times, too, even with all the practice he’s had and his bona fides as an explainer.

Melania Trump is, by her own testimony, a mother and a very private person—very European traits she brought with her from Slovenia. So, chances are she’d busy herself making certain that Barron, the Trumps’ 10-year-old, does his homework and doesn’t hassle the White House help, especially the big guys with the steely eyes and the plastic earpieces. Where Melania would shine is on the imaginary runway the fashion industry will construct for a nation that will turn head-to-thread agog over her wardrobe, not to mention those resplendent state dinners. No alcohol will be served because Donald Trump says he doesn’t drink.

Little is known about Melania’s friends, or girlfriends, except that in most photo-ops she’s surrounded by the Trump gallery of family women. So, for state dinners, and other, informal get-togethers, the new crowd at the White House, if Trump’s elected, might include financiers, such as Carl Ichan, developers, wall builders, bankers, Kim Jong-il, landowners, deal makers, Vladimir Putin, attorneys, tax loophole experts and golf course designers. Excluded from the guest lists would be any NAFTA member-nations, women who fail his approving eye, Mexicans, currency manipulators, the media, NATO members who fail to pay dues, Muslims, members of Congress who voted for Obamacare and the Clintons (because Trump would jail Hillary.) State dinners might likely be held at the nearby Trump International Hotel instead of at the White House, where guests could bunk in—at going rates, of course—without having to leave the premises. (Guests stayed over under the Clintons, too, in the Lincoln Bedroom in exchange for campaign contributions.)

While Donald Trump would be busy shredding the First Amendment and allowing the NRA to use the Second Amendment for target practice in the White House gym, couturiers would arrive with dry goods by the yard and bolt, hoping to fasten their labels to Melania in the same way that Jacqueline Kennedy and Nancy Reagan gave rise to designers’ careers. To think that Michelle Obama, and daughters, Malia and Sasha, had the simple, but tacky, taste to order from the J. Crew catalogue. On the other hand, Melania doesn’t appear to have the attitude, or aptitude, for fluttering among the tea cups or fussing in a garden the way Michelle swooned over a couple White House lawn-to-table lettuce leaves. And it’s a pity that Melania would never be the rip-roaring speaker and crowd-pleaser that Michelle is, for, it goes with the legacy, that Michelle and Barack Obama are the two best speakers ever to occupy the White House.

Bill Clinton’s another matter. He’s a mere wisp of his former self and his clothes barely fit anymore, drooping, now, like sagging sails on tall spars. Life has changed since he left the White House in 2000. Back in the 1990s, when he was president, there were all-night policy discussions over pizza and burgers on the fly. Then his cardio circuitry went haywire, and open heart surgery forced him onto a healthy diet of greens and no grease. There’s the problem of protocol and what to call Bill Clinton, short of Bubba. First Spouse? First Dude? After all, Bill Clinton has rightfully earned the honor of being called Mr. President, as the title follows him through life. So, when it is announced on formal occasions, “The President of the United States,” how many Clinton heads will spin and smile. Or will there be just a quiet moment of nostalgia and the memory of who used to wear the pants in the family. To say the least, Chelsea and the grandkids may be twice blessed.

But for openers, the big problem with Bill Clinton will be the family foundation and all the other cumulative baggage that he shares with his wife. His peccadillos trail him like tin cans tied to a dog’s tail. First, the Foundation. America was promised transparency and none was forthcoming (while Hillary was secretary of state.) Several of Hillary’s State Department loyalists, i.e., Huma Abedin, Cheryl Mills, were on three payrolls simultaneously—their day jobs at State, the foundation and the consulting firm that advised the foundation. And while Hillary was doing her gig at the State Department, the Foundation was collecting millions of dollars from foreign governments and some reprehensible people. Do the revolving door, the foreign ATM and the obscene speech fees continue if Hillary’s elected president? And will there be vendible pardons on the way out the door the way Marc Rich grabbed his? Donald Trump dragged Bill Clinton’s sexual predations into Hillary’s campaign, forgetting that he, too, had a gaggle of accusers bird-dogging him as long as, if not longer than, Bill Clinton’s list of the aggrieved and groped.

Bill Clinton likes to brag about the booming economy during his eight years as president and that he’d like to have a hand at fashioning economy policy if Hillary’s elected. Here’s what Bill Clinton’s economic policy wrought: He let Robert Rubin, his Treasury Secretary, convince him that the free markets, unimpeded, should dictate economic policy; listening to Rubin again, Bill Clinton repealed Glass-Steagall, the bank regulatory law that had existed since the Great Depression, which led to near economic collapse during the following administration of George W. Bush and well into the years of President Obama; Bill Clinton reappointed Alan Greenspan as chairman of the Federal Reserve. Greenspan pushed for the creation of derivatives and swaps and oversaw the shift of investments from stocks to housing wherein the phony paper brought the housing market crashing down and millions of people lost their homes. So, the question is, would Hillary want Bill meddling in economic policy, or would she prefer to leave that to John Maynard Keynes.

And one other important fact: According to campaign reportage in The Washington Post, it was Bill Clinton who convinced Hillary Clinton to vote for the war in Iraq while she was a senator from New York. In war and peace, Bill Clinton just can’t resist.

It’s tough watching the Obamas wind down and pack to leave the White House even though the President seems to be having great fun campaigning these last days as a Happy Warrior. Agree or disagree with their politics, the Obamas are a stylish couple: hip and high couture rolled into a glamorous pair. And for what it’s worth, they’re a couple who have eyes only for each other. And one final sigh of relief: there’s never been a whiff of gossip or rumor about the Obamas during their eight years in Washington.