Thanks to Owen Ellickson, We Can All Die Smiling

Before the deluge, some tweets. 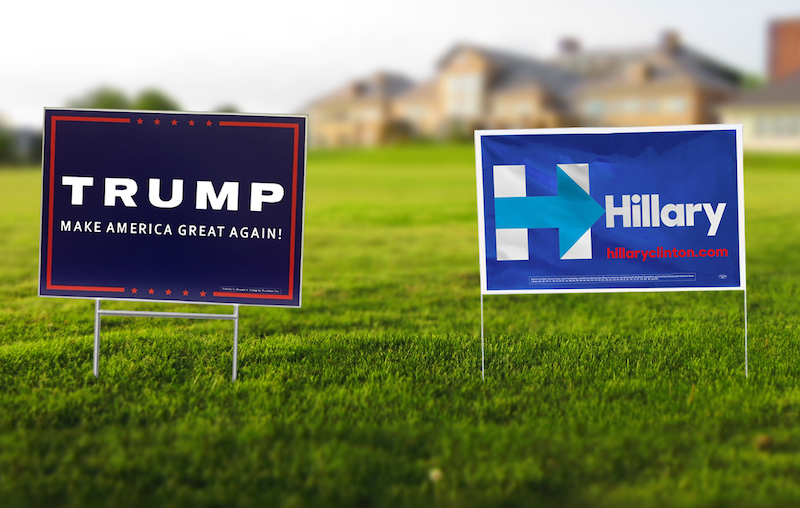 Just before Germany went under it gave us Walter Gropius, Fritz Lang, and several other culture-world hot shots. America’s coughed up a man named Owen Ellickson. He’s had a checkered career writing and producing sit-coms—checkered if you go by his page on IMDB—and he’s been tweeting my favorite political commentary of the election. This commentary takes the form of miniature skits, or perhaps comic strips without drawings. The characters are the names you see in the newspapers: Trump, of course, and Ryan, Boehner, Putin and so on. Twitter being what it is, nobody gets a first name except Hillary, who doesn’t get a last name.

Ellickson’s well up on the election’s twists and turns and presents them from a decidedly pro-Democrat point of view. Admittedly some of these twists and turns aren’t real. His Donald Trump recently taped a Latino outreach video with James O’Keefe while Ben Carson gave feedback. More disturbingly, Ann Coulter reached a strategic point under the earth’s crust and was awaiting Trump’s orders to trigger a nuclear device. This move would be in keeping with the Ellickson Trump’s private motto, one that he worked out with Roger Ailes. The candidate explains:

TRUMP: Me & Ailesy have this saying: “The age of man is over. It is the fire’s turn.” But I never gave much thought to what it meant.

RYAN: The blank space is no error. Ellickson’s artful in his use of the Twitter form, most notably in finding this simple manner (name, colon, nothing) of conveying private, unspoken thoughts, such as those of people on the brink of despair. More often than not, the person on the brink is Paul Ryan, whom Ellickson presents as a simple, workaday figure who wants to gut tax rates and the government without trampling on dark people or causing the apocalypse. In Ellickson World, Ryan appears shackled to Trump’s side, a situation that doesn’t always work for either. Ryan’s problems are as you might think:

RYAN: Looks like it’s tightening up. What do your internals say?

RYAN: And naturally the candidate requires some handling:

RYAN: The minority turnout in Florida is very high so far. If you lose Florida you’re toast.

Yet any couples counselor would grant that Trump has a side too:

TRUMP: Just did a rally in Orlando. The dump of all dumps!

RYAN: Did you check out The Wizarding World of H—

Sometimes the Ellickson Trump is merely brisk, as in the above example. More often he’s distinctively Trump-like, as when he chides his son for saying David Duke needs a bullet:

ERIC: I thought you wanted me to disavow!

TRUMP: This is a big overdisavow.

Trump also does a word smoosh to urge positive thinking on Ryan: “Think the thing that’s nice to think until it’s true!” and “Chase that feeling! Make your brain give that to itself!” That’s when Ryan’s having some trouble with Trump’s denials of sexual assault.

Another distinctive voice belongs to Vladimir Putin. Dialect humor doesn’t have the following it used to, but Twitter’s nothing if not hospitable. “Ground gemm?” asks Putin. “Vat iz dis?” A pensive Trump responds, “That’s the thing: I dunno. All I know is I don’t have it.” Later Trump congratulates Putin on Steven Seagal’s new status as Russian citizen. “That’s a big get for you guys,” Trump says. Putin: “Hyootch.” Trump and Putin have a third musketeer in Julian Assange, whose voice comes through thanks to another of Ellickson’s deft typographical gambits: capitalized words for history’s little big man. For example:

TRUMP: Do something, OK? I wanna seal the deal here.

Admittedly the hawk scream plays a part too. At any rate, the top two musketeers bend their thoughts toward their common foe. “Between my lies & the Feds we’re definitely hacking away, but that old bird can take a punch,” Trump says. The description matches well with Ellickson’s Hillary. A conversation with Robby Mook provides a quintessential moment:

HILLARY: OK, back to debate prep.

HILLARY: Donald fuckin’ Trump. Born on third base, fell down, sued the base.

In short, she’s hard-bitten, profane and smart. No, not just hard-bitten—she’s very hard-bitten, extremely hard-bitten. During debate prep she enjoys a rare moment of levity thanks to Trump’s famous confession (“moved on her like a bitch”) about furniture shopping with a married lady:

She’s also long-suffering, as no doubt she has to be. Among the many crosses she must bear is Lena Dunham. Having seen Dunham’s latest video for the cause, Hillary decides the best use for the girl is to look after campaign logistics in Alaska:

DUNHAM: Alaska. Got it.

HILLARY: Thanks. You’re the best.

There’s more that Hillary must deal with. Always there’s more. She shoulders the burden readily but without an excess of saccharine. For example:

MOOK: A Washington state elector refuses to vote for you. You need 271 now.

HILLARY: Ha! Of course I fucking do.

Her compensation is that she’s Ellickson’s one head-liner who always gets to be smart, never stupid. When she makes us laugh, it’s because she just hit the nail hard and square on. In fact, of all the Ellickson characters (and it’s quite a list: Rudy Giuliani, Chris Christie, Kellyanne Conway, Paul Ryan’s priest, Nate Silver, etc.) it’s Hillary who voices our thoughts about Election 2016. As we close, let’s have Hillary sum things up:

MOOK: Out earlier: polls showing you tied in Arizona and Georgia.