Tuesday, February 5, 2019: A day in the life of the first Hillary Clinton presidential administration. 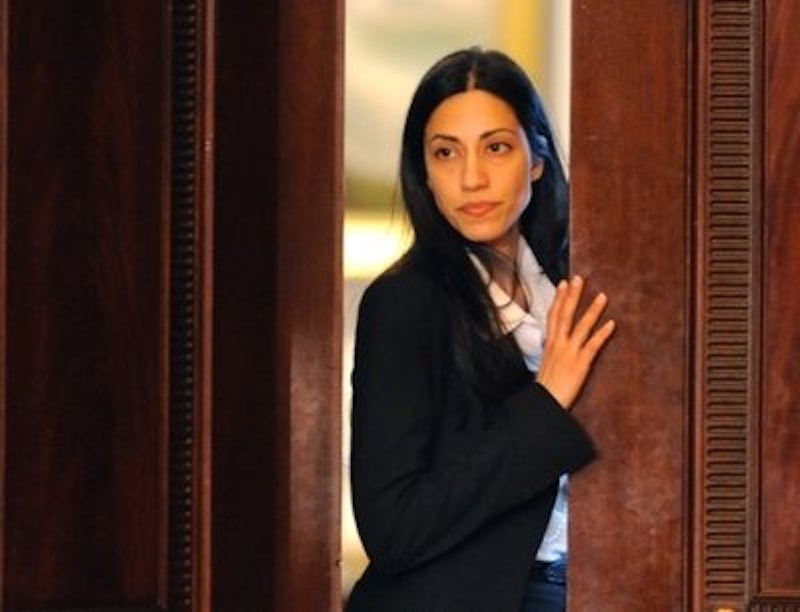 Huma Abedin woke early, dressed quietly, devoured half a grapefruit, and, after a few light words with the governess, crept out—cautiously—into a frozen Georgetown morning. Under her parka, she shivered, striding several icy blocks past various barricades and SWAT troops in huddles. The governess had asked “What will you do this today, and where will you go?” “I don’t know,” Abedin replied. “I never know.” On both counts, this was the truth.

Shuttered and dark, Betsy’s Bakery had seen better days; the surrounding neighborhood was fast asleep. Abedin scanned the rooftops, donned a handling glove, and yelled, “To me, Valkerie!” A large falcon descended from the sky, settling upon her arm. She stroked its feathers for a moment—then withdrew a slip of paper from a small tube strapped to one of its legs, subsequently replacing it with a different slip of paper she’d brought from home. Abedin whispered to the great bird, releasing it to a sky that had begun, inexorably, to fill with snow.

It was time to hail a cab. Never a Lyft or an Uber—always a cab. Always cash.

On the Mall, a cloaked, hunched figure slouched on a park bench was in the process of training and deploying carrier pigeons. He went about his work with the bearing of someone equally methodical and resigned, unaware of the increasing foot traffic around him. Abedin approached slowly and respectfully. The figure accepted her proffered croissant, smiling from beneath the hood, gesturing at the gradually accumulating snow.

John Podesta lowered the hood and considered Abedin, ruefully. With his hands, he mimed the initiation of “rock, paper, scissors,” raising an eyebrow. Abedin gave her head a quick, brisk shake, tapping two fingers on her lips. Podesta nodded, seeming to understand; he stood and paced for a moment, before slapping his thigh thrice and stomping once.

“The moon is high, Merlin,” she intoned in reply; she was shivering almost violently now. “The soldiers come to town for one harvest, but ultimately leave with another.”

“Why are the soldiers hungry?” Podesta asked, chewing his lower lip. “Why not thirsty?”

An anguished Abedin patted one shoulder three times, clapping her hands twice, attracting the attention of passersby. Podesta then beckoned her closer, and whispered “The pine fox somersaults Wednesdays at dusk upon the green” while sliding a fresh pigeon into her purse and pocketing the small Moleskin notebook she’d been instructed to give him.

Several stops and multiple security checkpoints later, Abedin entered the Oval Office. Hillary Clinton poured her aide a cup of coffee, then perched on the edge of her desk, frowning. Abedin rolled her eyes, then threw a Black Power salute. Clinton laughed, clearly delighted, and cracked her knuckles twice. Abedin dabbed sarcastically. Clinton grew grave and steely, and stood, walking behind the desk; she placed each palm flat and leaned forward, considering something, not looking at anything in particular.

“But what about the soldiers, Huma?” Clinton asked. She sounded worried.

And now Clinton nodded to herself, eyes unfocused, jaw clenched, a look Abedin knew very well: a consensus arrived at, a key decision made, a Rubicon crossed.

Abedin departed the Oval Office with a key inside of an envelope inside of a common bouquet intended for a particular undersecretary, who traded it for a Dead Kennedys cassette with an unlisted telephone number scrawled onto the insert, and later that evening, meeting Josh Earnest for drinks, a well-heeled admirer would ask “Did your efforts today help make a plausible case for Western democracy?” and “Is our country even prouder of you than yesterday?” And, in both cases, her answer was: “I don’t know. I never know.” That was always the truth.