There has been no shortage of people questioning the state of Trump's mental health. 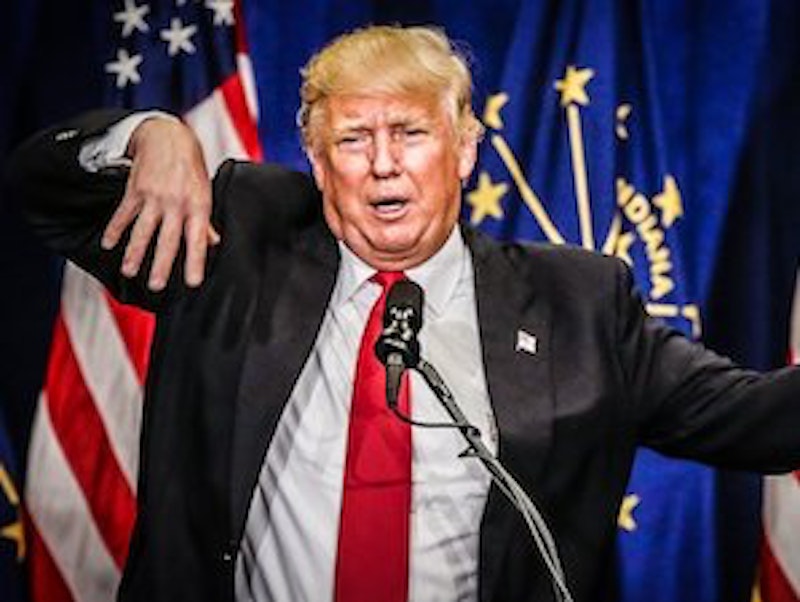 In the weeks just after the 2016 election, Keith Olbermann presented what he promised would be an easy way to remove a maniac president from office: Section 4 of the 25th Amendment. The amendment deals with the executive orders of succession, and Section 4 specifically details the removal of a living, incapacitated president. Olbermann optimistically suggested this "crazy man clause" would take less than a month to get Donald Trump out of office "as soon as the inauguration is over."

In the two and a half years since, there has been no shortage of people questioning the state of Trump's mental health, and some have the expertise to do it. Johns Hopkins psychology professor John Gartner began a petition to remove Trump office because "We... believe in our professional judgment that Donald Trump manifests a serious mental illness that renders him psychologically incapable of competently discharging the duties of President of the United States." Psychiatrist Bandy Lee of Yale compiled a book of essays by behavioral scientists on the "clear and present danger" Trump's mental health poses to the world.

The American Psychiatric Association (APA) defines mental illness as "health conditions involving changes in emotion, thinking or behavior (or a combination of these). Mental illnesses are associated with distress and/or problems functioning in social, work or family activities." The distinction is that personality disorders pertain to the external life of the mind and how it relates to the world, while mental illness applies more to the function of the brain as an organ. It’s also the APA, and their notorious "Goldwater Rule," that’s a source of debating the ethical dilemma of openly discussing the president's mental health.

In 1973, the APA added the Goldwater Rule to their Principles of Medical Ethics. "It's unethical for a psychiatrist to offer a professional opinion unless he or she has conducted an examination and has been granted proper authorization for such a statement." The rule was inspired by the attacks on Barry Goldwater when he was the 1964 Republican nominee for president.

Ralph Ginzburg, who was between obscenity trials for distributing pornography through the mail, stumbled upon a survey that found Goldwater was popular among medical professionals, but almost universally unpopular among psychiatrists. Ginzburg sent a poll to APA members simply asking, "Do you believe Barry Goldwater is psychologically unfit to serve as President of the United States?" Only 20 percent of psychiatrists returned the survey. Undeterred, Ginzburg ran a feature article in his debut issue of Fact magazine, declaring that psychiatrists across the country have deemed Goldwater unfit for office. One quote after another attacked Goldwater's mental state, calling him everything from a "compensated schizophrenic" to harboring "paranoid and omnipotent tendencies." Despite the small sample size, the ripple effect led the press to engage in questioning of Goldwater's mental fitness. Goldwater would go on to successfully sue Ginzburg, and serve in the Senate until 1987.

In regard to Trump, an increasing number of psychiatrists are citing the "duty to warn" to break, or at least amend, the Goldwater Rule. In an article for the Journal of the American Academy of Psychiatry and the Law, psychiatrists Claire Pouncey and Jerome Kroll wrote, "[The] APA's proscription on diagnosis without formal interview can be questioned, since third-party payers, expert witnesses in law cases, and historical psychobiographers make diagnoses without conducting formal interviews. Some third-party assessments are reckless, but do not negate legitimate reasons for providing thoughtful education to the public and voicing psychiatric concerns as acts of conscience. We conclude that the Goldwater Rule was an excessive organizational response to what was clearly an inflammatory and embarrassing moment for American psychiatry."

For the APA's part, they're continuing to uphold the principles of the Goldwater Rule. Other mental health professionals have also argued against what they view as a misuse of diagnostic criteria to attack the president, and fear the perpetuation of stigma around the mentally ill. One of the most vocal has been Allen Frances, a former chairman of the Department of Psychiatry at Duke, and an author of the fourth edition of the Diagnostic and Statistical Manual of Mental Disorders (DSM-IV). He participated in the creation of the criteria for diagnosing narcissistic personality disorder, and has expressed his disgust at the term flippantly flung around. In Frances' view, "[Trump] may be a world-class narcissist, but this doesn't make him mentally ill because he does not suffer from the stress and impairment required to diagnose a mental disorder... He can, and should, be appropriately denounced for his ignorance, incompetence, impulsivity and pursuit of dictatorial powers... The antidote to a dystopic Trumpean dark age is political, not psychological."

If one were to survey politicians, I don't think the general public would be surprised to find that they might tick more points of narcissistic criteria than the average person—it's the old joke that politics attracts the sort of people who shouldn't be in politics. And yet, in a profession that's a magnet to the self-serving, Trump is something different. One of the most interesting assessments of Trump's mindset came from a small video by Vice News, where Georgetown psychology professor Justin Frank was given 30-odd hours of Trump audio interviews to listen to. Frank concludes, "My diagnosis is he's Donald Trump. He's one of a kind. He shows lots of qualities that are very disturbing. He's impulsive, he has a very thin skin. He's paranoid. And every time he says, 'Believe me,' you have to say, 'Don't believe that,' because he's a professional liar, and he's our president. God help us."

The more I thought about Frank's assessment, the more sense it made. We've had presidents from highly affluent backgrounds before, but Trump spent his life uniquely sheltered from adversity. To read about the Roosevelts, the Kennedys, or the Bushes is to read about them overcoming illness, combat, and personal tragedy. Trump’s a combination of wealth, timing, and his unusual mentors—Roy Cohn and Norman Vincent Peale.

Cohn is probably best known for being Joe McCarthy's right hand man during the anti-communist hearings, but as attorney for the Trumps, he taught Donald that one must never settle, and hit back harder than they hit you. Peale was a minister and self-help author best known for The Power of Positive Thinking, whom Trump has credited with being one of the most significant influences in his life. As a child, the Trumps were frequent attendees of his sermons, and he officiated Donald's first marriage. An article by Trump family biographer Gwenda Blair explores the relationship between Peale's use of positive affirmations and Trump's self-promotion, which gives tremendous insight into his ability to overlook adversity in blind deference to his own self-confidence, as well as the uniquely repetitive manner of his speech.

Trump’s a salesman. His gift is making people believe his products will enrich the quality of their lives, whether it's luxury housing, a delightful vacation, an entertaining TV show, or his own butt in the Oval Office. Not all the people, just enough to keep him in business or in office. Trump’s an abnormal man in a crazy world, but he learned how to make it work for him.