Hill will bring him to heel. 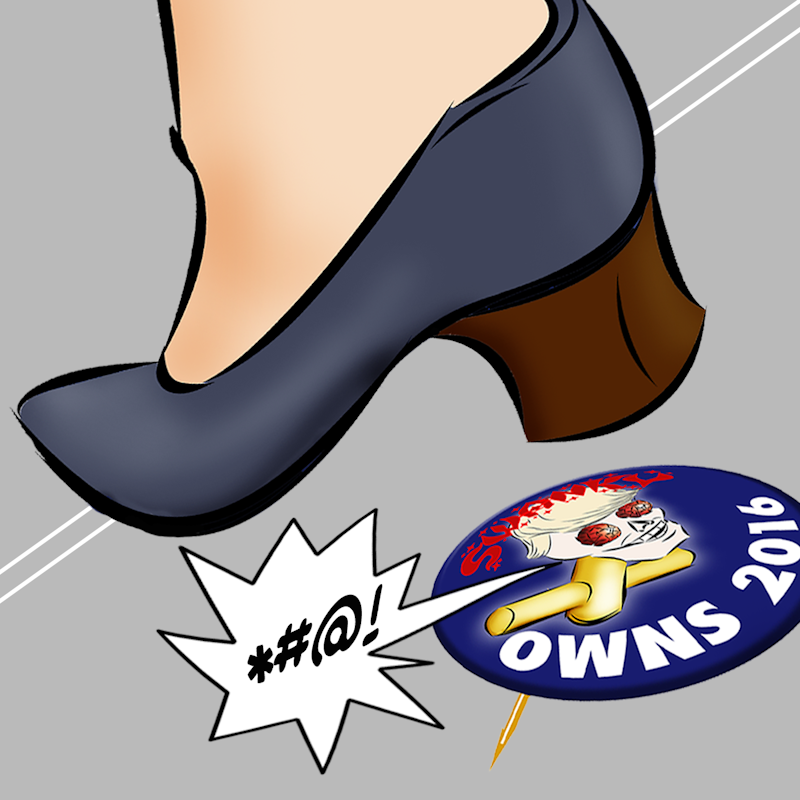 That Ruby-Eyed Skull Cufflink Big as Your Head has political columnists and commentators of every yellow stripe scared stiffless.

Pundits call him Hitler, Mussolini and Pol Pot in a bleached blonde B-52 weave. Pig Man, Bully Boy, Bad Taste on a Sharkskin Shingle, their fear and Double Stuff loathing is stinkin’ up the Chattersphere but not to worry, the numbers never looked better.

Can this reporter share something? Some months ago, I stepped off Swanky’s presidential campaign trail to spend more time with my family. But it didn’t take long before my family and I fell to bickering about dietary choices, so I’ve spent more time experimenting with radio talk show hosts.

Recently, I heard a story from one of those fusspots about Hillary Clinton having a lock on the national election, given Swanky’s overwhelming negatives. Something to do with polling, some weird trick invented by a local mom.

Point is, nobody likes Swanky. I mean, really likes, you know, like really-really and everything. It’s over. When it comes to the Ruby-Eyed Skull Cufflink Big as Your Head candidate for president, the American electorate is Full Negative Nelson. You know, statistically or something. Because, I guess, nobody likes Nazis, especially Nazis with New York Values. Nobody also likes deluxe luxury men’s jewelry, world-class cologne brands, and hand-tooled executive dresser caddies shaped like little penthouses, or anything else that remotely smacks of that rancid oozing pile of gauche gewgaws and fashion accessorizers. Down deep, people prefer the look and feel of truth and beauty. Oh yeah, don’t get your delicate sensibilities in a twist.

Bottom line, Clinton will step on Swanky and crush him into the Park Ave. pavement like some dirty little Chunky wrapper.

So what’s up with the Swanky hysteria? Frankly, this reporter got sucked into all that Hula Hoopla. Like so many fellow students of presidential politics, I got spooked by the Ruby-Eyed Skull Cufflink iconography of it all. Funny how that works. It preys on your subconscious, like spot illustrations in a HooDoo Dreambook Lottery Number Picker Guide. A goofy little owl here, some snake eyed dice there, maybe a Deviled Ham imp on the Secret Sure Thing page. Silly stuff perhaps, but it’s not in HooDoo Dreambooks for nothing.

All this means we chatterers can now breathe a class-wide sigh of relief. George Will can go back to writing about baseball as it relates to Beowulf. The New York Times can go back to writing about, well, I dunno, those creative Country Day School graduates always think of something—maybe exhaustive retrospectives about how distasteful Swanky was, including pages of letters from subscribers who remain disgusted and would like to schedule a MeetUp with those eager to share their vestigial disgust to over coffee and cake.

Thanks Hill, you know, pre-emptively speaking. Somebody must bring Swanky to heel and now that we’ve run his negative numbers, we have every confidence that you will do so. Nobody likes him. And everybody not likes you less. By the slimmest of such margins, the electoral process has always proceeded with all deliberate speed.

So that’s it, right? I know, some Nervous Nellies say it’s too soon to move on. Some credit Swanky with supernatural powers, the ability to cloud old, white, ugly, toothless, flatulent, dog track loitering men’s minds, that sort of thing. Others whisper that Hillary might not have what it takes to step on it by the time the conventions are over.

Relax. Hill’s heel will be tanned, rested and ready for that fateful day on the sidewalks of New York. And as far is this reporter and his dubious sources are concerned, what goes down won’t come as any October Surprise.