Mutually beneficial exchange is the key. 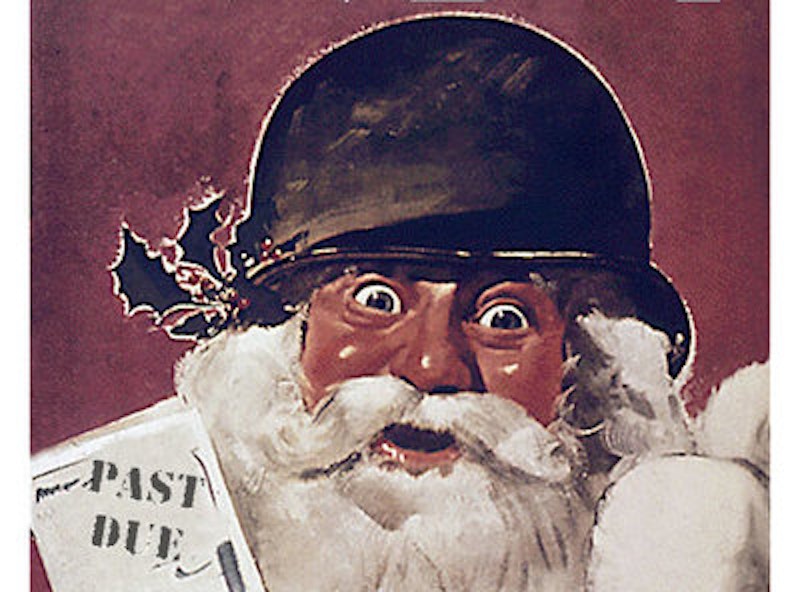 Peace on Earth would soon ensue if only people recognized that no one has a right to use your body or property without your permission (not even if they call themselves kings, senators, or tax collectors). Each interaction would then evidently be a mutually beneficial exchange (MBE), each party participating due to the expectation of being made better off for the exchange than had the exchange not occurred, even if they remained in (slightly less) impoverished, imperfect circumstances. Buying that bag of peanuts was good for both of you.

Instead of that simple model of constant incremental improvement, humanity comes up with endless ways to violate or deviate from the MBE pattern, like this dozen that crossed my mind during the holidays:

Some of my anarcho-capitalist friends declared the Friday before Christmas “Capitalistmas” and parodied anti-capitalists’ view of capitalists as self-absorbed by each giving themselves a gift. (There was no sign of the mean-spirited Christmas goblin named Krampus from Continental European lore on that day, and I read the news that one of those girls who blamed the fictional spirit Slenderman for inspiring her to stab a friend was sentenced to 25 years in a mental institution. I’ll take those as good signs for the season!)

I finished reading the funny and conservative essay collection Skirmishes by Neal Freeman, and one of his many insights gleaned from decades in politics is that people who create fortunes will tend to lean right, while their descendants who oversee foundations giving away all that money will tend to lean left. He suspects, reasonably enough, that this familiar (and tragic) pattern has something to do with the generations’ relationship to the money itself: create vs. redistribute. This doesn’t mean, say, Henry Ford was a wonderful guy, but he liked technology, whereas we have reached the degenerate point now where the Ford Foundation bearing his name laments that agriculture was ever invented. (Anarchist anthropologist James C. Scott may be wiser, suggesting that it wasn’t the markets, higher tech, or mastery of nature made possible by agriculture that led to the rise of tyrants at the dawn of recorded history but simply the centralization that came with it.)

Linguist Steven Pinker is exactly the kind of famous nerd with whom pushover mainstream libertarians are usually thrilled to be in the same room because, hey, he argues humanity’s getting more peaceful over the centuries, and that’s cool, right? Yet instead of just praising MBE, he still gushes over socialistic-geek stuff like “government data apps” and the hypothetical replacement of mass voting with focused “citizen juries” to avoid things like Brexit happening again. We can do better than this fashionable wonkery, comrades.

Maybe some of the very real horrors revealed by the Weinstein wave of sexual harassment accusations could’ve been more easily avoided had feminists not spent decades trying to convince us that, say, marketing high heels is “rape culture.” They should perhaps have focused instead on the more serious argument that rape is rape culture. How callous must some feminists be if they were denouncing things like makeup sales or overuse of the color pink when they could have been warning us all about the likes of Harvey Weinstein? Now that we’ve all learned a bit more about how widespread certain behaviors are, I do hope rape will become a bit less common—though at the same time, I hope we can become a culture transparent and intellectually honest enough to talk about nuanced footnotes to these issues, such as the fact that rape fantasies are more popular among women than among men.

New York City’s recently reelected communist mayor, Bill de Blasio, doesn’t want to leave journalism to MBE and dreams of a City-subsidized press (though, to be clear, I’m not pretending a politician like de Blasio, even while comparing himself to Gandhi, is as offensive as Paul Nehlen, the Bannon-backed Wisconsin GOP congressional candidate who warns that Jews feign whiteness to undermine white culture—and who will never, never be elected to anything in New York City).

Government pretends to give but mainly takes away, and I do not think I have seen a government action in the United States in my lifetime more predatory and insane than the City Council of Philadelphia banning bulletproof glass from convenience stores, lest the customers be offended. This does nothing to enhance MBE but wonders to enhance certain involuntary exchanges.

Oh, and if you’re keeping track of federal government expenses, here’s that missing/misappropriated $21 trillion you may’ve been looking for. That’s a great, big, underreported holiday reminder that if you condone the existence of government, you’re a moron.

Superstars often do MBE but coat it with the pretense of pure philanthropy, so I can’t help wondering whether Bono has yet had meetings about whether it would look warmhearted or exploitative to release an album (or single) called U2: #MeToo.

BuzzFeed editor Kelly Oakes isn’t waiting for MBE to occur and tweets, “All I want for Christmas is full communism now.” Okay, I hope someone put 100 million dead people, censorship, work camps, and chronic starvation in that quirky arty nerdy gal’s hip vintage stocking this year! (This is what liberal hipsterism has wrought, while half my fellow libertarians still ask, how can we be more hip like them?)

No matter how much fun you have this season and how decadently you treat yourself, just don’t end up decapitated in your Ferrari by the Devil disguised as a ghostly girl, the fate that befalls the character “Toby Dammit” (played by Terence Stamp, a.k.a. General Zod) in a segment of Fellini’s 1968 film Spirits of the Dead, out of which a fan cobbled a cool Roxy Music video.

And be grateful that social media services like Twitter remain free, despite all the griping we do about them—though we can hardly be blamed for griping after, say, their execs not only ban offensive accounts but, recently, even pause while doing so to condemn John Stuart Mill’s conception of free speech countering bad ideas as naïve. How much encouragement must censors be given these days?

But for those times when jerks (online or off) are so plentiful that MBE with them just seems impossible, I’m all for one of the most ancient traditions of all: shunning. The Amish have the right idea about how to handle the most annoying social entanglements. Just stop.