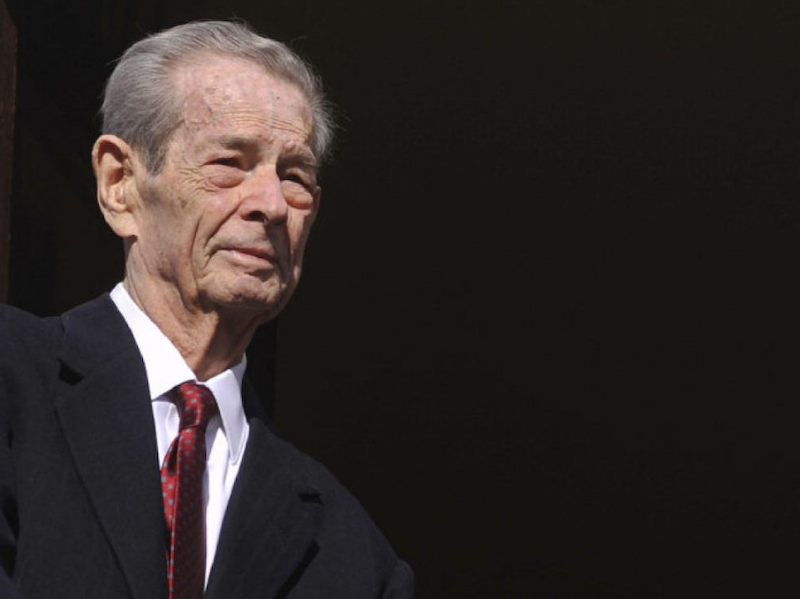 On December 5th, 2017, the former sovereign died at 96 in his private residence in Aubonne, Switzerland. He suffered from chronic leukemia and metastatic carcinoma. The burial took take place on the 16th, in the new Archdiocesan Royal Cathedral in Curtea de Arges, Romania. King Michael was the last monarch of Romania and the last in Eastern Europe.

His past, however, remains controversial. In 1940, field marshal Ion Antonescu forced King Carol to abdicate in favor of his son Michael. Antonescu was granted discretionary powers. At 18, Michael was proclaimed king. By that time, Romania had joined the Axis powers against the Soviets. Though Michael was the king, Antonescu had full power as “leader of the Romanian state.” Through the use of a legal technicality and elements of coercion, four years later, Michael managed to arrest Antonescu (through an internal coup) and appoint a new prime minister.

In August 1944, faced with the Soviet invasion, Michael sided with political forces hostile to Nazi Germany. The British, the Americans, and the Soviets offered a truce and Michael agreed to it. Given the geopolitical context, the Western powers didn’t intervene against the Soviet invasion. About 130,000 Romanian soldiers were captured and sent to labor camps inside the USSR. The peace negotiated by Michael’s people was seen by some as a national betrayal and a capitulation to the Soviets. Romania had to pay $300 million in war reparations to the USSR and accept unconditional surrender.

Still, peace with the Soviets allowed the Romanian army to liberate northern Transylvania from Hungarian occupation. At the war’s end, King Michael was decorated by Harry Truman with the Legion of Merit in highest rank and by Josef Stalin with the Order of Victoria for “the courageous act of decisively turning Romania’s policy away from Hitlerist Germany and joining the Allied Nations in a time where Germany’s defeat was not certain.” Some people think that Michael’s coup against Antonescu hastened the advance of Soviet troops across Romania and Europe, to the detriment of Allied forces. The absence of invitations throughout the years for Michael at Western events commemorating Victory Day is seen by some as a tacit condemnation of his coup d’etat. Michael wasn’t invited by any Western state to the 60th anniversary of Victory Day. He was only invited in Russia and at certain events in the Czech Republic and Slovakia. The truce or capitulation, however one chooses to look at it, did save many lives.

The Soviet military occupation of Romania ended in 1958, but Eastern Bessarabia still retains Russian troops to this day. Molotov’s pledges (made in ’44) to allow the country to choose its own government through democratic vote and retain its status as a constitutional monarchy were never honored by the Soviets. King Michael was forced to recognize a pro-Soviet cabinet, with Petru Groza as the prime minister. Seeing the abuses committed by the Groza government, King Michael demanded his resignation and Groza refused. His refusal was a stark violation of the country’s constitution, which gave the monarch the power to name and dismiss ministers. Michael attempted a “royal strike,” in which he refused to sign and promulgate government decrees.

In the end, through coercive means, the communists imposed their will. On December 30, 1947, they launched a coup d’etat and forced the King’s abdication. That spelled the end of the monarchy and the beginning of the so-called people’s republic. In an extraordinary session of cabinet on that same date, Petru Groza concluded, “We’ll make sure that the ex-king shall leave in peace of mind, as is proper, so that none may bring any offence to him who, understanding the voice of our times, chose to retire.”

There are critics who insist that Michael was not only blackmailed into abdicating and leaving the country, but also encouraged (bribed) to do these things in haste—the communists, allowing him to leave with expensive paintings, gold, and jewels. Confidential documents from the British Foreign Office reveal that when he left, Michael had only 500,000 Swiss francs. Claims to greater wealth taken out of Romania with him are typically dismissed as “communist propaganda.”

In January 1948, Michael began to call himself Prince of Hohenzollern, using for the first time a name denied to his house by the Hohenzollern family in Germany during WWI. Through this, Michael admitted he was no longer king of Romania. However, in March that same year, Michael denounced his abdication as illegal. The Romanian communist government retracted Michael’s citizenship that same year. As a key note of interest, in 2001, due to legal disputes over the name Hohenzollern-Veringen for his son-in-law Radu, as well as fearing the pretensions of the German Hohenzollerns over the royal house of Romania, Michael broke off the historical ties with the Hohenzollern-Sigmaringen family. He became known as King Michael of Romania.

Prominent voices inside the current governing coalition have expressed a desire for a return to constitutional monarchy. A consultative referendum is rumored for next year.