Some Tax Cuts are More Equal Than Others

Democrats hoping GOP’s hubris will hurt them in November. 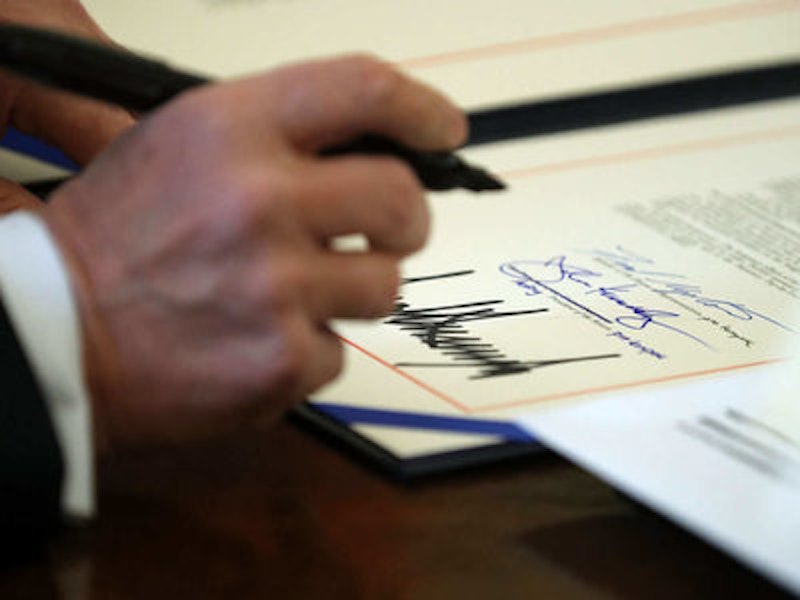 Hey, President Trump! Honk if you understand the Republican tax bill you’ve signed into law beyond how it will benefit you and your family.

When Gary Cohn, Trump’s ambassador to the wonderful world of money, asked at a White House conference for a show of hands on how many CEOs would use their tax windfall to create jobs and expand their businesses, very few arms went up. An embarrassed Cohn’s nervous giggle and second request failed to elicit more enthusiasm, suggesting that, one way or another, the captains of industry would pocket the loot.

Bernie Marcus, founder of Home Depot and a Trump cheerleader, described the Republican tax bill in an opinion piece as “the gift that keeps on giving.” Separately, Home Depot announced that it would include its tax savings as part of a $15 billion stock buy-back to reward shareholders as well as CEO Craig Menear and other executives—exactly the opposite of the GOP’s sales pitch for its hasty, largely unread singular legislative notch. Trump, cynically, in a characteristic oops, has admitted the deception.

However, in an unabashed suck-up to the Trump administration and an implied hint for favoritism, several major corporations, such as AT&T, Boeing and Comcast, announced almost immediately upon passage of the tax cuts that they’d award bonuses to employees and create jobs. Boeing relies heavily on government contracts and AT&T is seeking to acquire Time Warner and the Justice Department is suing to block the merger. Wells Fargo, which announced that it was raising its minimum wage to $15, has been heavily fined by the government for fraudulent acts. Sinclair Broadcasting, headquartered in Maryland, also announced $1000 bonuses for employees. Sinclair’s $3.9 billion merger with Tribune Media Co. is pending before the Federal Communications Commission.

Economics is about money in motion, not idle cash. Businesses are flush with stockpiles of unused cash. Michael Bloomberg, former mayor of New York, estimates that businesses are sitting on $2.3 trillion in cash they’re not investing, nor are they creating jobs. The economy is humming along nicely and needs no stimulus. In fact, many economists fear the cuts will overheat and could lead to inflation and high interest rates. But, Trump and his band of know-nothing Republicans, needed a win to justify their presence in Washington.

Yet the durable fable persists. Steve Mnuchin, treasury secretary and the Trump administration’s frequent flyer, is still pushing the myth of less is more. “We think as a result of lowering business taxes, wages will go up. So this is a huge opportunity for creating jobs, for creating tax cuts for working families,” Mnuchin said on CNN. That, to put it mildly, depends on what you do and where you do it—a lathe operator in a red state, maybe, an auto mechanic in a blue state, forget it.

Trump himself, encircled by the Congressional Republican gaggle and lapping up the adulation of his toadies, echoed the refrain: “Jobs… Jobs. Jobs Jobs.” Trump added: “This will be the biggest tax cut since Ronald Reagan.” Trump neglected to include that Reagan’s tax cut added trillions to the national debt, just as this cut is projected to do, and that Reagan, as a result, had to raise taxes. In fact, Reagan raised taxes 11 times—four as governor of California, and seven as president. Trickle-down economics didn’t work then, and there’s no reason to expect that it will now.

And trickle-down economics, it should be remembered, sent Kansas into bankruptcy and economic panic until its pie-in-the-sky tax cuts were repealed after devastating the Kansas economy. Arthur Laffer, the godfather of trickle-down economics, was the consultant to Kansas Gov. Sam Brownback (R), as he was for Reagan, and he peddles the loopy idea to state legislatures through the American Legislative Exchange Council (ALEC), which is funded by the Koch brothers.

As far back as 1896, William Jennings Bryan, the great orator and an authentic populist, had trickle-down economics pegged. “There are those who believe that if you just legislate to make the well-to-do prosperous that their prosperity will leak through on those below. The Democratic idea has been that if you legislature to make the masses prosperous their prosperity will find its way up and through every class that rests upon it,” Bryan said in his fiery “Cross of Gold” speech to the 1896 Democratic National Convention in Chicago.

To recap: Everybody gets a piece of the $1.5 trillion tax cut. But some tax cuts are more equal than others. Joe beer-drinker and his family’s deduction get doubled, but the corporate tax rate shrinks to 21 percent from 35 percent. But—and here’s the cropper—the individual tax cuts self-detonate after several years while the corporate tax cuts live on forever.

So, over the long haul, working Americans could wind up with tax increases. Republicans argue, however, that future congresses can extend the cuts. Without a future extension, 53 percent of Americans will be paying higher taxes in 10 years. Most Americans won’t find out how the tax bill affects them until tax time, 2019, when the first filing is due under the new law. It is, in a capsule, a massive shift of the nation’s tax burden from the wealthy to the working class.

But here’s the sneaky part, the loophole that benefits Trump and his family, and those in his business and financial class: The estate tax is lowered so that $22 million can be passed on without taxes, and developers with commercial real estate holdings get a huge tax break through reductions and write-offs through LLCs (so far no one has claimed paternity of that self-serving amendment. For now, chalk it up to some obscure lobbyist.) Passive investors and those who benefit from carried interest are huge winners under the GOP tax cuts. And Ivanka Trump and Jared Kushner benefit not only from the pass-through on inheritance but also on Kushner’s real estate business.

By now you’re wondering: The president and vice president are exempt from any conflict of interest rules. (All 50 states have some form of conflict of interest laws or disclosure rules that prevent interest or gain by their votes or actions.) Tax experts estimate that Trump’s benefits under the Trump-Ryan-McConnell tax cuts will be in the millions—as much as $11-15 million a year, according to the Center for American Progress—but the public may never know because Trump has upended 40 years of custom and history by refusing to release his tax returns or disengage from his businesses. (However, there may come a point where the special counsel’s investigation into collusion with Russia subpoenas Trump’s financial records and provokes disclosure. We may then find out that Trump’s not worth as much as he pretends.)

The nation’s current debt is $15 trillion, and was expected, before the tax cuts, to climb to $25 trillion in another 10 years. But the Republican tax cuts are estimated to add another $1-2 trillion to the debt. House Speaker Paul Ryan has the solution, though. His plans for next year include pushing for cuts in Social Security, Medicare and Medicaid. In other words, Ryan and the Republicans will try to cut social safety net programs for lower income Americans to pay for the tax cuts for corporate America and real estate developers.

States will receive windfall revenues from taxpayers’ lower write-offs under the new law. Mortgage interest and local tax deductions will be capped to help offset cuts. In Maryland, Republican Gov. Larry Hogan, no fan of Trump, promised to work with the majority Democrats to replenish taxpayer losses because of the lower deductions. Some Democrats said Hogan should’ve asked first.

And along the way, the GOP tax cut bill also eliminates the Affordable Care Act’s requirement that everyone have health insurance that eventually could leave 13 million people uninsured. This would revert to the pre-ACA system whereby those with health insurance pay for the health care of those without through additional premiums. (Trump called this the repeal of Obamacare, which it may eventually be. The mandate is what made Obamacare work. Does this guy understand anything? Or is it that he just doesn’t care.) Tax return on a post card is another fantasy Trump espoused and promoted. There are still seven tax brackets, which would require a very big post card.

The Trump-Ryan-McConnell tax cut plan is unpopular and downright suspect across a wide swath of America, as are Trump’s job performance and believability ratings, according to recent polls. Republicans are gambling they can reverse the negative view, and Democrats are betting they can translate the suspicion into congressional seats in the 2018 mid-term elections.

Either way, the tax cut law represents the total corruption of the nation’s political system. It is a dizzying roundelay of money that Washington is supplying to corporate America that will be returned, in part, as campaign contributions serving as thank-you notes.