It’s a disgrace we have virtually no say in who gets on the court for life. 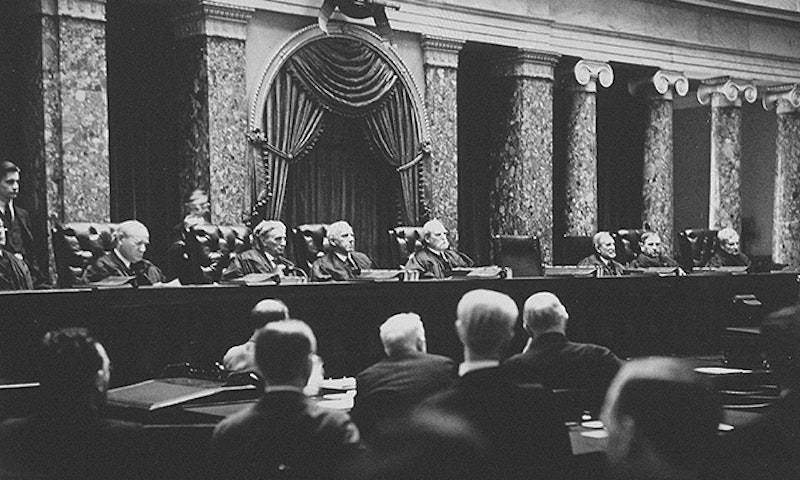 In an op-ed published by The New York Times yesterday, Anita Hill argued, more gracefully than anyone else, why an extensive inquiry into the accusations made by Dr. Christine Blasey Ford against Supreme Court nominee Brett Kavanaugh is necessary. This is a prime chance for the Senate Judiciary Committee, and by extension, the United States government, to prove that they’ve learned not only from Clarence Thomas’ fraught 1991 confirmation hearings and the more recent #MeToo movement: “In 1991, the Senate Judiciary Committee had an opportunity to demonstrate its appreciation for both the seriousness of sexual harassment claims and the need for public confidence in the character of a nominee to the Supreme Court. It failed on both counts.”

She continues: “As that same committee, on which sit some of the same members as nearly three decades ago, now moves forward with the Kavanaugh confirmation proceedings, the integrity of the court, the country’s commitment to addressing sexual violence as a matter of public interest, and the lives of the two principal witnesses who will be testifying hang in the balance.”

Whether they care or not about integrity is another question, and I doubt most of them do: Mitch McConnell may not have Kavanaugh pegged as his first choice, but you know he’s scrambling to cover all his bases behind the scenes in order to secure another conservative judge for a lifetime appointment. Kavanaugh’s advocates have already shifted to a reprehensible defense of dismissing sexual assault as “rough horse play.”

I’m even more dumbstruck by something Bari Weiss said on MSNBC yesterday: “What about the deeper, moral, cultural, like, the ethical question here? Let's say he did this exactly as she said. Should the fact that a 17-year-old, presumably very drunk kid, did this, should this be disqualifying? That's the question at the end of the day, isn't it?” Anchor Stephanie Ruhle pointed out that “We're not talking about should he be disqualified to be a dog catcher. We're talking about to be a Supreme Court justice.”

Stating the obvious, appointments to the Supreme Court are as serious if not more so than presidential elections, considering they’re lifetime appointment. But the American people have no say in who is nominated or appointed to the court—all we can do is vote for a president that will select nominees consonant with our own beliefs and hope for the best. It’s a terrible system made even worse by that cartoon turtle gullet Mitch McConnell refusing to hold any hearings for Merrick Garland simply because he was nominated by Barack Obama.

The Supreme Court could overturn Roe v. Wade if Kavanaugh is confirmed. I am not an ideologue and belong to no party but if you’re not a supporter of reproductive and LGBT rights, you’re not a smart person, and have no place in any office or position of authority, especially the Supreme Court. There is no room for debate. Anti-choice advocates, homophobes, and misogynists are as dumb and out of touch as Flat Earthers.

To those who ask why Ford didn’t speak up earlier—say, when Kavanaugh became a circuit court judge in 2006, or when he became a White House Secretary three years prior—I ask, have you ever been sexually assaulted? I haven’t and I’m not a woman, so I can only imagine that leveling such a serious accusation against a powerful man is terrifying to say the least. Ford has opened herself up to the scorn, threats, and vitriol of millions of people.

“Going out on a limb” doesn’t even come close to conveying the risk she’s taking by speaking out. Keep in mind that she never told anyone about the assault until 2012—generally women don’t sing in the streets after something like this has happened to them. So of course I believe her, but I wasn’t there. Ford, Kavanaugh, and Mark Judge are the only ones who know what really happened. As Anita Hill wrote, an extensive inquiry into Ford’s accusations is the bare minimum for what should happen next.

The ignominy of the Senate Judiciary Committee in 1991 and McConnell sidelining Garland in 2016 are reason enough to completely overhaul the way that Supreme Court judges are selected. Donald Trump sucks, but worst-case scenario, he’ll be out of office in six years. Kavanaugh, only 53, could be on the Supreme Court for decades. Gay marriage never would’ve been legalized across the country in 2015 with Kavanaugh and Gorsuch on the bench. This is something we all deserve a say in. I don’t want to live in a country where the buck stops at McConnell, bigoted conservatives, and spineless liberals.