Trying to Get Back to the Reagan Years

Roseanne isn't sensationalism: it's trying to talk about American character. 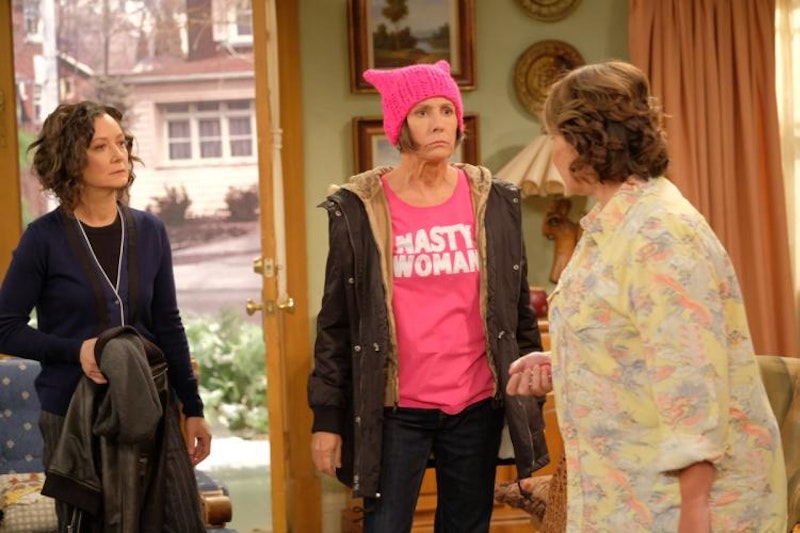 The only thing entertainment really does in America is reconcile us to each other. Or it used to. Creativity is dead. Originality is a marketing gimmick. Is success, at least, real? The only new success is a show from the Reagan years, Roseanne, so I don't know anymore. Has it been that long since we could laugh together?

ABC welcomed Roseanne Barr back to primetime and was rewarded by more than 18 million viewers. Nostalgia's the hot new ticket. Why? Because back in the Reagan years we believed America had a future to look forward to. At our best, this is what we're trying to get back to.

But I bet you didn't expect the American future to be trans-gender MAGA. Why not? Who's got better ideas? I thought so... Roseanne is here to normalize voting for Trump in full MAGA pride. She also wants to normalize boys who think they're transgender, or at least dress like girls. And that's just the first two episodes—brace for more. You know it's coming and you know we deserve it.

The old is new again, because everything we've tried since the Cold War ended has failed us. Our entertainment is now as likely to divide us as anything else. We like division so much, that's all our politics does these days. We can’t help wanting to blame someone else; we can’t admit there's anything wrong with us. So Roseanne Barr, herself pretty MAGA at this point, tells us to screw politics and look to making society work instead. Just say you're a proud Trump supporter and that the people who dominate entertainment are going to have to deal with it. Then get to the messy business of finding some social consensus.

Roseanne starts with a boy who likes to dress funny and might just be transgender in order to show what it might take for two MAGA retirees to accept him—not just to love him as family, but to be okay with him. They're lower-class Boomers always on the receiving end of moralistic prattle about not being prejudiced. They've never had the power to tell other people how to live. Social change has always been the disguise by which wealthier people heap their class contempt on them. But it might work out if the boy decides to be a man about his predicament and deal with the scorn and misery.

This is an important insight and no one's talking about it. Roseanne isn't sensationalism: it's trying to talk about American character. The grandparents want their grandkid to be as strong as them and they’re willing to deal with weird, because they're prepared. They know far more about what it means to be left out than obscenely wealthy celebrities or politicians who parade their moralistic social change ideas. Lower-class people, unlike elites, have a lot in common with the outcasts of America mores. This is what Roseanne was about a generation back—this is what it's doing now, because no one else will do it.

What does grandpa, fat and old, want? This obsolete unhealthy guy who never does things the safe way just wants to know that the boy is being a man about being weird, that he understands he's going to get into trouble and needs to stand up for himself. The old man wants to see character. He wants self-discovery or self-exploration to have an American core. That's why Roseanne bets on three screwed-up generations under one roof being one big family, if not happy.

In most of America, three generations living together is a sign of failure. But if you have people who never abandon you, you have shelter in shaking up politics, the economy, and everything else. That's worth a lot and it's worth admitting what you've failed at. It's also supposed to show the economic winners in post-Cold War America what they can learn from the losers: How to cope with bad things.

And unlike much smarter, more successful people who’d probably call him racist, sexist and bigoted, grandpa is actually right. We all now experience in various ways the fear that freedom might be killing us. Some people fear globalization means the end of work for decent people; others that social media tech means brainwashing and stealing elections. Almost everyone agrees our freedom confuses us and ruins just about anything we touch. So maybe watch John Goodman and Roseanne Barr and think about whether we've got character left in common and whether it's enough to wait out the storm.