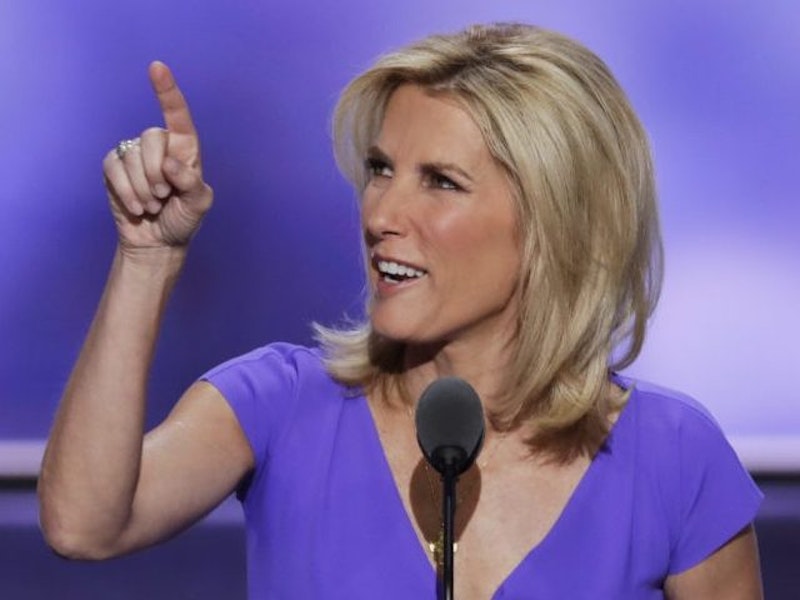 Newswriting can be a bitch. “Late Thursday afternoon,” says a CNBC piece, and then “In a statement Thursday.” After that we’re back to “Late Thursday afternoon,” which is followed by the couplet “Earlier Thursday” and “Later Thursday.” Each mention of Thursday goes with a different sentence, and each sentence is about a different company dropping Laura Ingraham like a sock with smallpox. Put simply, on Wednesday the conservative smartass issued a snotty tweet about David Hogg, anti-gun activist and survivor of the Parkland massacre. Hogg tweeted his followers to contact Ingraham’s sponsors. They did so, and there followed Magic Thursday, the day of many corporate statements. Soon enough the star of Fox’s The Ingraham Angle was joining in. “Ingraham, in two tweets, apologized Thursday afternoon,” says CNBC.

Boy, did she. Ingraham crawled. “For the record, I believe my show was the first to feature David immediately after that horrific shooting and even noted how poised he was given the tragedy,” she tweeted. She’s David’s friend! Hear her on “the brave victims of Parkland,” as in “On reflection, in the spirit of Holy Week, I apologize for any upset or hurt my tweet caused him or any of the brave victims of Parkland.” Of course, the beauty part is “in the spirit of Holy Week.” It was Holy Week when Ingraham dinged the kid, it was Holy Week when she recanted, and in between there was Hogg siccing his followers on Wayfair, Liberty Mutual, and the rest. Guess what made the difference? But Ingraham has to tell her lie, and she has to bring God into it. She cares a lot about Jesus, but she especially cares about him when Arby’s gets involved.

Ingraham committed her offense against Hogg in this tweet: “David Hogg Rejected By Four Colleges To Which He Applied and whines about it. (Dinged by UCLA with a 4.1 GPA...totally predictable given acceptance rates.)” TMZ had asked the kid about getting turned down by four different schools in the California state system. Hogg answered, and it’s a judgment call whether this answer of his counts as a whine. The boy sounded unhappy, which isn’t good, and his thoughts homed in on the bigness and importance of what he was doing (“we’re changing the world, we’re too busy,” and so on). Aggrieved self-importance could be read there.

What strikes me is his dizziness regarding why the schools said no: “I am not surprised at all, in all honesty. I think there’s a lot of amazing people that don’t get to college, not only that do things like I do but because their voices just aren't heard in the tsunami of people that apply every year to colleges in such an economic, in such a, really, impacted school system here which we have here in America where people have to go into massive amounts of debt just to go to college and get an education.”

Thank you, Governor Palin. Hogg seems to think he was turned down because students need so much debt. The connection calls for fleshing out. Otherwise it looks he saw a big social issue over there, and saw his personal plight over here, and figured the two must be connected because both involve colleges. And tsunami, huh?

I just committed the very thing that Wayfair and TripAdvisor and the rest cannot tolerate.  Wayfair says, “The decision of an adult to personally criticize a high school student who has lost his classmates in an unspeakable tragedy is not consistent with our values.” TripAdvisor says, “In our view, these statements focused on a high school student, cross the line of decency.” The statements TripAdvisor has in mind are milder than calling someone Sarah Palin. Wayfair and TripAdvisor would be mad if they knew about me. But I draw this distinction. Whereas I focus on Hogg’s thinking, Ingraham takes aim at his peevishness, or alleged peevishness.

I won’t say I’m offended or taken aback when the lady does this. But I’m impressed by how small a person can be. Ingraham thought her point mattered. The kid’s nose was out of joint about the colleges, therefore the kid’s wrong about everything and guns are good. This worm’s-eye approach to the topic is cramping for ordinary people, but conservatives believe in the power of character to move political belief. Just ask Laura Ingraham, now that Liberty Mutual has explained Holy Week to her.