First, get rid of the concept of atheist celebrities. 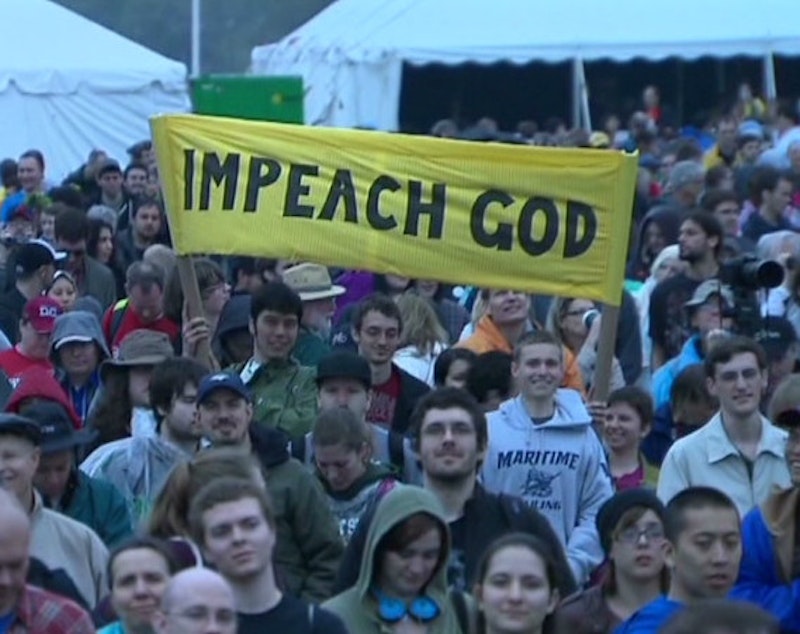 I have a love/hate relationship with the atheist movement. On one hand, I've experienced more grace, fellowship, and healing among my close-knit group of atheist podcaster friends than in a church. On the other, many prominent atheist activists have either been outed as sexual predators or tried to deny any problems within the movement. The latter has only intensified with the recent BuzzFeed article detailing the sexual misconduct allegations against Lawrence Krauss. While some organizations, like the American Humanist Association and the Center for Inquiry, have cut ties with Krauss, others feel most prominent atheist activists aren't doing enough to address this issue.

For example, Seth Andrews of The Thinking Atheist podcast, has received pushback for statements he made on social media regarding sexual misconduct in the atheist movement. While he did call Krauss’ behavior “inexcusable” in a Facebook post, he also referred to several friends of mine in the comment section as “extremists,” and claimed they believe in “a vast conspiracy of frontline male activists who don't care about respect for and the safety of women.” One of these so-called extremists is Minnesota Atheist associate president Stephanie Zvan, who told me on my Bi Any Means podcast a few weeks ago about the history of prominent men in the atheist movement misusing skepticism as an excuse to not believe in women’s stories. While I’ve deliberately avoided online disputes with Andrews, I’m still disappointed at his poor response to those telling him misogyny in the atheist movement is a systematic problem.

The incidents involving Krauss and Andrews are just the latest examples in a long line of controversies—Elevatorgate, “Dear Muslima,” MythCon, etc.—that have stirred up heated debates about the atheist movement’s future. Some have left the movement altogether, some have formed smaller sub-communities, and others suggest the problematic elements of the movement are just a few bad apples. So where does the atheist movement go from here? Can the movement survive? If so, how?

One thing I suggest is getting rid of the concept of the atheist celebrity. By declaring just a handful of prominent atheist activists to be the movement’s leaders, it creates a hierarchal system where the same arguments against God get repeated ad nauseam, and newer ideas about how to put humanist values into action are ignored. Everyone should be a leader in the atheist movement, whether that person is fighting for church and state separation in a small town in Pennsylvania or creating a community for liberal atheists living in the Bible Belt. Martin Luther King once said, “You don’t have to know the theory of relativity in order serve.”

Many complain about “divisiveness,” but maybe schisms are necessary. Instead of one movement focusing on the nonexistence of God, there needs to be several secular movements and communities that focus on different areas. It’s time to stop pretending to be nice to people we don’t like, and align with those who share our common values. That’s what I’ve been doing lately. I don’t want to be stuck in the atheist silo anymore. I want to bring secular humanist representation to social justice activism, and social justice representation to secular humanist activism.

I no longer want to rub shoulders with the big names. It was neat going to a bonfire with Matt Dillahunty a few weeks ago at the Nashville Nones conference, but the best part of that weekend was watching Callie Wright of the Gaytheist Manfesto podcast marry the love of her life Celes the day after the conference. It was a beautiful day surrounded by people I consider my family, and I didn’t have to worry about being cordial to toxic people.

I recommend two upcoming conferences that’ll give a platform to newer ideas about humanist activist. The first is Secular Social Justice, in DC on April 7th, and will center on secular people of color who often aren’t invited to big-name atheist conferences. The conference was created in 2016 as “a direct response to pervasive complacency within the secular community that considers considerable focus on matters of social justice issues unnecessary or a ‘distraction.’” This year’s speakers include Ashton P. Woods, Diane Burkholder, Dr. Juhem Navaro-Rivera, and Sikivu Hutchinson, among others.

Also, Secular Women Work, which will be held in Minneapolis from August 24-26. This conference continues Secular Social Justice’s theme of humanist activism for change, but will center on women, femmes, and non-binary people. So far only three speakers have been announced—Mandisa Thomas of Black Nonbelievers, Greta Christina, and Jessica Xiao—but they reached a fundraising goal of $13,000 fundraising goal within a month, so expect great things from them in the future.

The atheist movement has given me a wonderful community and a million nervous breakdowns. I don’t know how long I’ll associate with the great movement, or if my suggestions will help reform it, but they’ll help me stay sane. If the movement continues to center the same handful of straight, cis, white guys, then I’ll continue to create my own sub-movement focused on social justice, humanism, and community.