The ridiculous reactions to Roseanne. 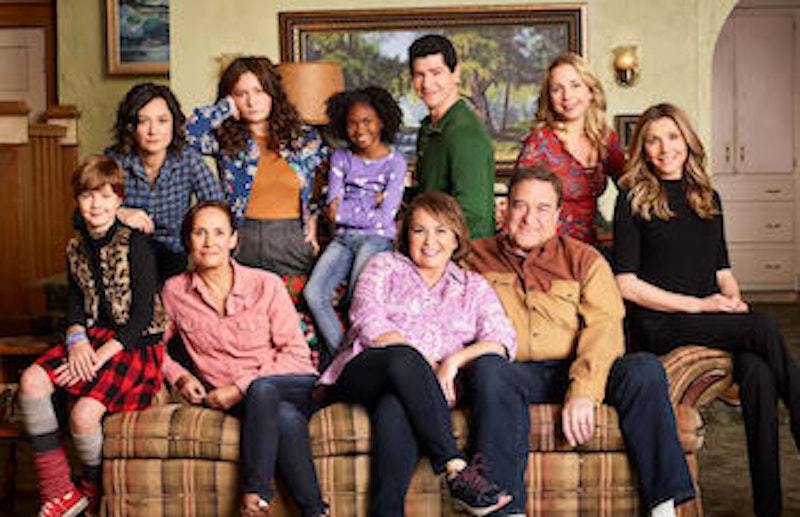 These days, every piece of entertainment is read as though it were a raw allegory, in which there are no characters or events, only emblems. In a Christian allegory like Pilgrim's Progress, abstract categories, collective identities, virtues and vices like Christian, Worldly Wiseman, and Obstinate run hither and thither, pretending to be particular people. The point isn't art or a convincing fiction or shedding light on particular characters or events; it’s the flat didacticism of a hyper-simplistic sermon, pounded into the heads of the peasantry in the form of general categories of people performing generic actions. It was a relief to arrive at artists such as Shakespeare, in whose plays very particular people appeared and spoke and loved and fought.

If Shakespeare were around today, the reactions—even, for God's sake, by drama critics—would tend to go like this: Danes are not really indecisive (let's examine the statistics on that); this distortion and vilification of Danes must end. Women shouldn't be portrayed as passive victims, like Gertrude and Ophelia, for women are super-strong, or at least if we keep saying that over and over we might convince ourselves that they are, which would be a good thing, even if they’re not. People like us want characters who look like us, in every single presentation of anything, so why doesn't the cast more or less perfectly mirror the population as a whole by race, gender, orientation, disability?

Consider some of the reactions to the Roseanne revival, which really do tell you where we're at right now. Roxane Gay in The New York Times, and a number of other people elsewhere, said it was funny, which, I remind us all, is a central function of comedy. Then she said she wouldn't watch it again. She had a number of reasons, but the main one was that she doesn't like the politics of Roseanne Barr's Twitter feed. Soon we'll be demanding an ideological profile of everyone working on any entertainment, so that we can insulate ourselves completely from any sign of disagreement. People, even fictional characters, disagreeing with me is abusive and harms my self-image; it's like being sexually assaulted.

The new Roseanne has been held by many to be an "inaccurate" or "idealized" "portrait of the President's base" (for example, by Jared Yates Sexton), which takes it for granted that the purpose of the show is to depict Trump voters, which I imagine is not exactly how Roseanne thinks about it, especially as her character long preceded the political advent of Trump. Now, there’s no doubt that what Sexton and others mean is that Roseanne, and every slice of media which depicts any person who supports Trump, should portray every Trump supporter as an idiot and a bigot. What they are saying flatly, though, is that Roseanne should base her character on statistical averages for Trump voters; that anyone who is depicting any Trump voter ought carefully to jam all Trump voters into a single body. Good luck.

That Roseanne Barr is a particular person, and Roseanne Conner a particular character, both of whom have a long history, is neither here nor there according to this style of criticism. That she's extremely idiosyncratic and funny is irrelevant: if either Roseanne voted for Trump, she must represent herself as a "typical" Trump voter. There are about a million things wrong with this. It’s an extremely primitive form of raw philistinism that misunderstands art entirely. But perhaps the worst immediate practical consequence is that it’s turning television, drama, film, and fiction into sheer pedagogy. The question isn't "Was that a good movie?" But, does it manipulate its audience to achieve some sort of social or political transformation?

That's why Black Panther was welcomed as though it was the Poor People's March on Washington, even as the cast peddled Lexuses. I'd like to start by demanding evidence that movies or sitcoms or novels actually do have much of an effect on anyone's opinions or behavior or self-image.

If you were to put out a movie right now in which a black female character behaved passively, or in which she was in a self-esteem crisis that left her confused and which didn't suddenly transcend into self-realization, you'd be regarded as a racist and sexist. People would criticize your work on the ground that it's an inaccurate depiction of black women. You’d protest, in vain, that you did not write the character to be a representative of all black women, or "the typical black woman," but rather a completely particular human being. In vain, that it’s be impossible to create a character that represented all black women. In vain, that every black women is in fact a particular human being. In vain, that what the critics want would make your art an idiotic allegory.

And in fact, what the critics demand is not an accurate representation of millions of people as one person, even supposing that such a thing were possible. What they demand is an inaccurate representation, a picture that is "aspirational," in which each black woman depicted is all black women and all black women are beautiful and strong and overcome whatever hardships and barriers they face. Then maybe when all the black girls see it, they will become more like that.

So in the end, every character has to be an inaccurate and tendentious and impossible representation of millions of people, whether it's all black women jammed into a single strong and beautiful body or all Trump supporters jammed into the body of Roseanne. You certainly will kill entertainment this way, making it all into an ideological falsification of reality. And if you think that proceeding in this utterly disingenuous and incoherent manner way will make black girls stronger or Trump supporters more ashamed, I demand that you show me the fucking evidence.