George Will Is Correct, Yet Full of It, On Iraq

The Post pundit has apparently forgotten he endorsed the Iraq War. 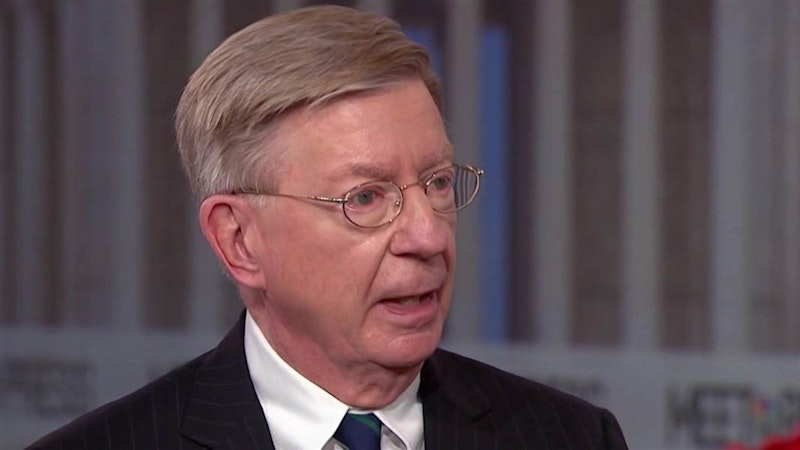 George Will has some bad news: “For the first time since World War II, when the mobilization of U.S. industrial might propelled this nation to the top rank among world powers, the American president is no longer the world’s most powerful person.” The claim is down in paragraph six of a nine-paragraph column. You can see why. All right, the revelation is major, but most revelations of that sort are startling and this one isn’t. When the heavens pour down and your shoes leak, you eventually notice how wet your feet are. This fact, once known, causes no other facts to jump. You kind of figured it was on its way.

So now who’s the planet’s number-one guy? “The president of China is, partly because of the U.S. president’s abandonment of the Trans-Pacific Partnership without an alternative trade policy,” Will says. “Power is the ability to achieve intended effects. Randomly smashing crockery does not count.” Will doesn’t say what intended effects President Xi Jinping has brought about. Nor does he make the technical point that China’s president is something of a dictator and that dictators have more power than leaders of a democracy. (Of course, for decades one U.S. president after another was termed the most powerful man in the world despite the Soviet Union and its dictators.) Will’s point appears to be that the TPP was going to do quite well by America and now it won’t. With the agreement, the U.S. could’ve kept its bridle in place over a vast part of earth. Now the U.S. won’t because Donald Trump, that genius, threw the bridle away—or smashed our crockery, as Will puts it.

Being more cautious than Will, I’d say we can’t be sure just yet that our leader has fallen from the world’s top spot. I might be more certain if Will offered some evidence, but he doesn’t. This lack points us to a powerful truth, namely that a columnist can throw out loose talk about American decline because it sure feels like America has declined. Will can do the point as a by-the-way while pursuing his main topic, which is the cockeyed stupidity of picking John Bolton for national security adviser. If I may paraphrase, Will says the man with the mustache suffers from hubris, that he thinks America can get its way by giving orders and blowing things up. Faced with Iran and North Korea, Will says drily, “Bolton thinks bombing both might make the world safer. What could go wrong?” And Bolton’s attitude toward the world entire world “reflects what has been called ‘narcissistic policy disorder’—the belief that whatever happens in the world happens because of something the United States did or did not do. This is a recipe for diplomatic delusions and military overreaching.”

Why, the man thinks invading Iraq was a good idea. Will has no time for that idea, firmly pronouncing the decision to topple Saddam “the worst in American history.” What he doesn’t say is that he had plenty of time for the idea in 2002 and 2003. Looking at the Middle East and what a war on Iraq might do, Will predicted “a ripple effect, a happy domino effect, if you will, of democracy knocking over these medieval tyrannies.” His attitude was come on already, jump in. Look at World War II: “We made it up as we went along, and we did a very good job.” But would this new war be quick and easy? “Fairly quick, yes,” Will said.

No, it wasn’t. A decade and a half after Will voiced his happy thought, we’re all pretty much agreed that our country has come down in the world. Meanwhile, a Republican president who despises the Iraq War chooses an adviser who’s for it, and a conservative pundit who promoted the war tells us he’s appalled, and the pundit never says that he favored the very same adventure that the adviser is now supposed to oppose. This is why I never vote for Republicans. To borrow a phrase from long ago, they aren’t serious people.