It's because the Republican Party sucks. 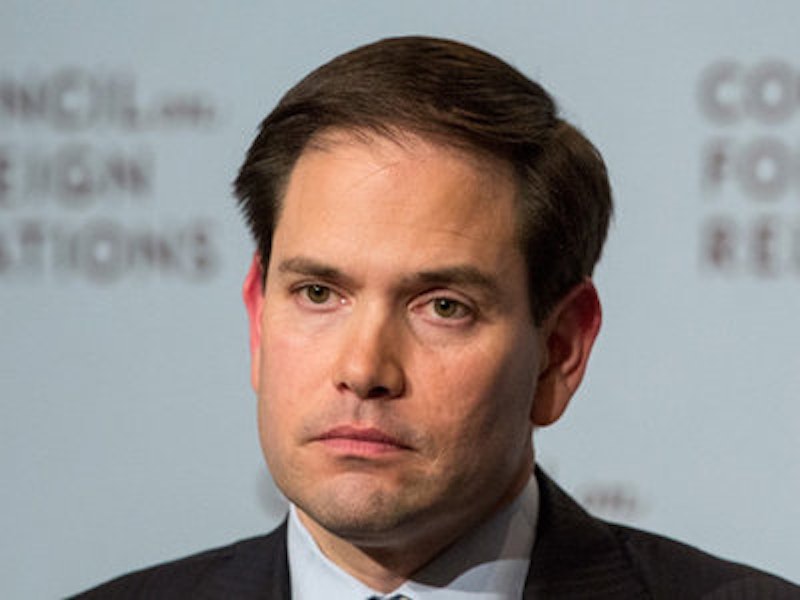 Here’s a quote from long ago that makes me smile. New York Magazine had a cover story featuring a shirt-sleeved young pol and a headline that read, in part, “Who Is This Guy?” The inside featured a quote from an unnamed “Republican strategist,” apparently a mouthy sort. “He has an indifferent record in Arkansas, absolutely zero experience in foreign policy, and, we hear, a history with the ladies,” said the strategist of the cover subject. “Are we worried? You guess.” Who was that pol on the cover? Should the Republicans have been worried? You guess.

I bring this up because the article appeared in January 1992, a little before Democrats voted in the Iowa caucus and got the ball rolling that year. Bill Clinton (yeah, you knew) lost the Iowa caucus. He also lost the New Hampshire primary. But everybody knows his name and they will for quite a while. This is great news for Marco Rubio, who trails in both states by more than a dozen points. On the other hand, media outlets aren’t waving him before the public and telling us about the bright new hope. The trend in his news coverage has been to ponder why the boy isn’t taking off and to ask if he could work a bit harder, or maybe a lot harder.

Clinton, of course, hit some terrible rapids after that New York story, what with the ladies, the pot, the draft and the Clinton tendency to fancy-dance when these topics came up. But he’d already made himself the man that party bigs wanted to nominate. From the article: “And a subtle stampede is on in the salons of New York and Washington. ‘Clinton is the very heavy favorite,’ said a prominent New York fund-raiser.” That was supposed to be happening for Marco around about now. It isn’t. Yes, the very rich and influential (in GOP circles) Arthur Singer came out for Rubio way back at the end of October. But the much richer and more influential Sheldon Adelson is sitting on his hands. Rubio’s been calling the big man every other week to tell him how great the campaign is going, and word is that Adelson thinks highly of the young senator who loves Israel. But word is also that Mrs. Adel son prefers Ted Cruz, and that the couple may just wait and see what happens. Possibly Rubio would be the GOP’s “Who Is This Guy” right now except Mrs. Adelson has such bad taste in men.

Possibly, but consider this. Wise heads say that endorsements, not polls, indicate whom a party is going to nominate. According to 538, Rubio has been creeping up on Jeb Bush in the endorsement tally. Right now Jeb still leads with 46 points (don’t ask me how 538 converts endorsements into points, they just do), and Rubio has shinnied his way to 36 points. But over on the Democratic side, Hillary has 455 points. This leads to the belief that Republicans don’t really want to endorse anybody. One also reads that, the Mrs. Adel son factor to one side, most of the GOP’s big donors have been reluctant to give money since Jeb Bush began foundering in the polls. This definitely includes the Koch brothers, one of who was quite enthusiastic about Scott Walker in the distant days of last spring. Now the brothers say they may skip giving any money to contenders for the nomination.

Why this reluctance among donors? The Kochs don’t say so, but the press says donors think Donald Trump is doing so well that any money they give will go to a losing candidate. Republican office-holders and grandees may feel the same way about their endorsements. In a typical election year, the drama would have been the toppling of overconfident Jeb by hungry young Marco. Instead they’re both bouncing around in Trump’s wake. Put differently, if Jeb’s frontrunnership has turned out to be a damp match, so has Rubio’s insurgency. In fact the pack of regular Republican candidates has proven to be a book of damp matches. That’s because it’s raining. To painfully extend my metaphor, Republican policies have been raining failure for a dozen years. Even people who vote Republican notice something like that, given enough time. That party is ready to crumble like wet cardboard.

So who is this guy who’s going to be the Republican nominee? I don’t know, but I bet he’s dead meat.