I could take him. 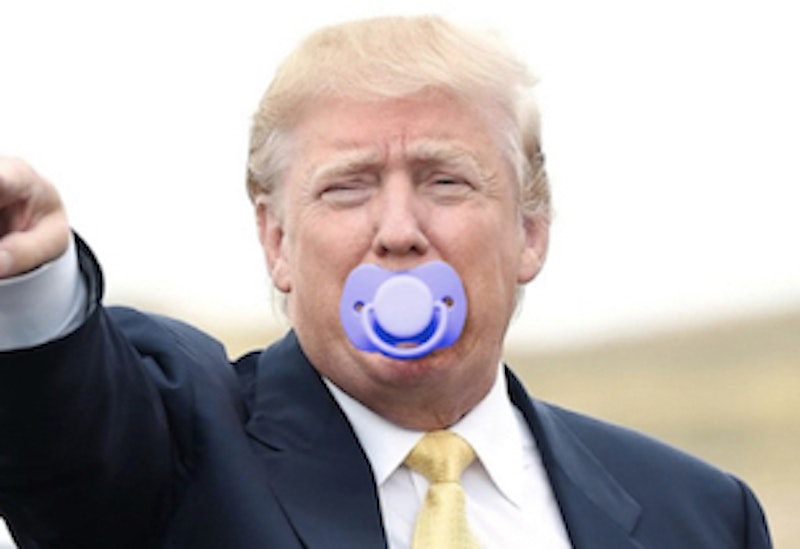 David French, a thoughtful conservative, flexes his brow over the Trump era. “Cheap shots have replaced bravery,” he writes. “A certain kind of animal cunning has replaced honor. Libertine aggression has replaced fidelity.” Libertine aggression? Well, he’s talking about manhood and how conservatives now perceive it. “There was a time, not long ago, when I thought I knew what sort of masculinity conservatives revered,” French says, shaking his head. Not anymore because they’re all crazy about Donald Trump. Out of all the gut punches dealt by this demented age, French says, that’s one of the nastiest. Or, to quote him in the original Bowtie, “Of all the disorienting and disturbing cultural effects of Trump’s ascension to the presidency, few are as disorienting and disturbing as the redefinition of ideal masculinity in the hearts of many of his biggest fans.”

French gives his thoughts in “The Unmanning of Conservatism,” of brief pieces in which writers discuss the cruddy effects of having Trump as national leader. Given the title of his piece, I’m surprised French leaves out Trump’s pussiness and how little his fans care about physical bravery. Trump can dodge the draft and nobody cares because they never expected him to fight. Listen to candidate Trump back when some BLM protesters grabbed Bernie Sanders’ microphone. “I would never give up my microphone,” Trump said. “I thought that was disgusting. That showed such weakness… That will never happen with me.” The twist: “I don’t know if I’ll do the fighting myself or if other people will, but that was a disgrace.” Trump doesn’t know who’ll do the fighting because it doesn’t matter. What counts is that he’s calling the shots.

The toughness his believers see in Trump is an indoors variety, the kind where people huff at each other until somebody gets their way. Trump lacks this kind of toughness, as he does any kind; his fans would know that if they knew his record as deal maker. But the point here is that this kind of toughness is not very tough. It’s soft-handed. Supposedly, the liberal’s great mission is to snivel the powers-that-be into rigging matters so that a person may never come up against his or her shortcomings and learn some needed lessons. Whereas, supposedly, conservatives want to stand free of government help and remain stalwart and firm; if I’m not mistaken, their thinkers believe that doing so creates the sort of population that a society can rest on. Now we have Trump, who rests on society and not the other way around. Leave aside that he inherited his money. Even if he’d made it, he’d have done so by pulling strings and working the system. He said as much when selling himself to GOP voters in the primaries. His pitch was that he knew the system from the inside; this shrewd operator, this deal maker, would now work the levers and benefit the regular folks.

Surely Ayn Rand would’ve made him a villain. Surely the regular Joes viewing Fox all curled their lips at the sight of Trump, that big crybaby, whining at Megyn Kelly in the first Republican debate. But no. They got mad at Kelly for asking tough questions; their hero shouldn’t have to work for what he got. They don’t want to be a yeomanry after all. GOP voters care about feeling big and getting theirs, and this surprises David French. The rest of us may find it disturbing but not disorienting.