We can and probably should keep talking “lunatic.” 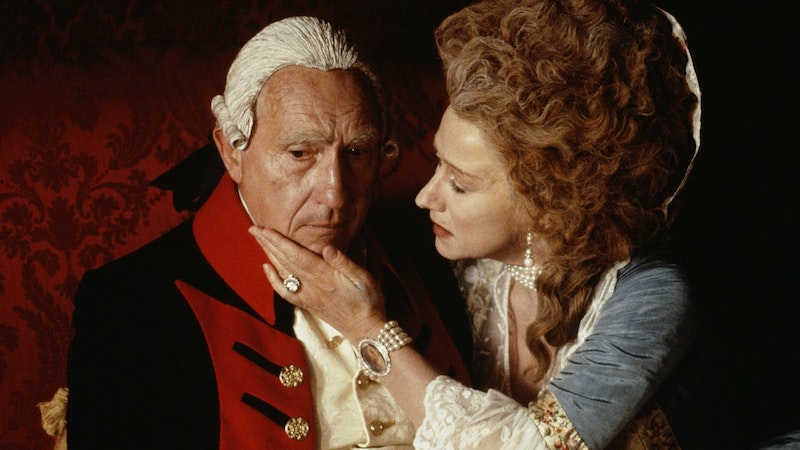 In the 1994 film, The Madness of King George, Ian Holm as Dr. Francis Willis makes a telling aside while waiting to meet the king for the first time. Speaking more to himself than to Colonel Greville, standing nearby, he says, “Did you know, Mr. Greville, the state of monarchy and the state of lunacy share a frontier? While many lunatics fancy themselves kings, he is the king. Where shall his fancy take refuge?” Greville, looking immediately nervous, responds, “We do not use the word, ‘lunatic,’ sir, in relation to His Majesty.”

Oh, Mr. Greville, you are adorable.

Around Christmas, Donald Trump’s early morning rage tweets were still the poorly-considered tantrums of a little lord, but they’d grown a bit trite. His ability to shock the nation and therefore position himself in the media spotlight (his greatest strength) was on the wane. We focused instead on Michael Cohen’s recantations, on the hints of Muller’s ponderous momentum, on the question of Manafort knowingly operated by Russian intelligence, and on the many foreign and domestic bit players who seemed to be wriggling out of the woodwork.

We saw Rudy Giuliani with a permanent Scaramucci death grin, making us wonder, once again, whether Giuliani was a good man in a bad situation or a bad man with equally bad judgment trying to ride out the trouble. We even saw Mnuchin take another turn through absurdity with his weird and unnecessary calls to bank CEOs that made them (and the world) question whether Treasury was functioning on a set of highly alternative facts. But with the notable exception of Trump making time to explain to a seven-year-old that Santa didn’t exist, there hadn’t been the usual comedy of errors emerging from the White House.

After the thoughtless decision to withdraw from Syria (which is now looking like another non-event), the resignation of James Mattis, and the Democrats mounting a counter-attack in Congress, it seemed like a political turning point was coming into view. We were finally starting to make sense of many puzzling loose ends, if not in a pleasant way, then at least in a reasonably coherent way. And it was increasingly clear that whether or not Trump had been installed by Russia, he was never going to figure out how to do his job.

His “poor me” tweet, not long after a picture of him at the Resolute desk signing a stack of bills that didn’t exist, summed things up. Trump no longer owned Congress (not that holding all the levers of power had done him any good). And with increasing clarity about how, when, where, and why the Trump campaign may have been coordinating with Russian intelligence, the political surrealism surrounding and protecting His Majesty no longer appeared to be functioning. Entering the New Year, he was beginning to seem not only irrational and incompetent, but boring. The word “lunatic”—never far from any discussion involving Trump—was more matter-of-fact than mean-spirited.

Recently, David Leonhardt, in an inflammatory New York Times column, pointed out that “Throughout his career, Trump has worked hard to invent his own reality, and largely succeeded.  It has made him very rich and, against all odds, elected him president. But whatever happens in 2019, his false version of reality will not survive history, just as Nixon’s did not.” One could argue that Trump would’ve been wealthier had he avoided business, entertainment, and politics altogether. But Leonhardt’s observation that the President invents a temporary alternate reality seems accurate.

With the revelation that FBI counter-intelligence was investigating the possibility of Trump being a Russian asset from the beginning, the hallucinatory vortex around the President may still appeal to a base 40 percent, but it has left the other 60 percent to wonder where the “frontier of monarchy” has stopped and the Manchurian Candidate has begun. As the longest shutdown in American history reaches a boiling point, that stubborn 40 percent may be entering a more rapid decline.

Trump didn’t actually care about the wall. As Josh Marshall notes in “A Little Bit of a Political Bind,” the call with President Pena-Nieto on January 27th, 2017, a week into Trump’s presidency, shows that “Who pays for the wall doesn’t matter. Even the wall itself barely matters. It’s just that Trump can’t be humiliated in front of his supporters.”  At least 60 percent of the American people can see that this is just a hyper-inflated partisan game of chicken—even if 800,000 federal workers just missed a paycheck, the national parks are being vandalized, the TSA crippled, law enforcement on reserves, and long-term damage is done to the country’s infrastructure. Trump is costing us an estimated at $6.5 billion per week, which may well exceed the initial projected costs of the wall itself if that hasn’t happened already. The situation is explosive. Something is bound to give and it’ll be ugly.

Trump has thus far been the country’s power animal, effortlessly able to polarize our national discourse and install himself as the axis around which everything circulates. It’s a great way for him to shift attention from his incapacity to his outrageousness—even if such a thing is only achievable through drastic and ill-conceived acts of political blundering. But that gets old.

It has taken a massive bureaucracy-wrecking country-stopping pissing contest to get our attention focused back on Individual 1. And so we’re paying attention to Trump again as the United States grinds to a halt. Impulse control isn't at issue anymore. Now it's a question of implicit collaboration versus knowing collusion with surreal delusions of grandeur left for a 25th Amendment Hail Mary that probably won’t happen. Muller has bigger fish in the fryer.

Luckily for the United States, a president is not a king. We can and probably should keep talking “lunatic.” We know where Trump’s “fancy is taking refuge.” At this point, the whole world knows: if not on the southern border, where he’s using the humanitarian crisis he created to justify a wall that’ll do nothing but cost billions, then perhaps his refuge is 7820 kilometers to the east. As of the latest New York Times Manchurian-Candidate bombshell and our federal government taking on the dysfunctions of a failed state, consider us no longer bored. The President has become interesting again.